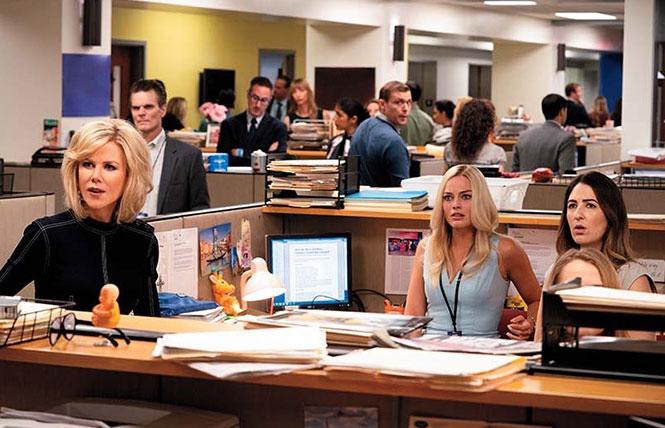 The late critic Roger Ebert once said that of all the arts, movies are the most powerful aid to empathy. This observation is put to the test in Bombshell, just released on DVD by Lionsgate. The film details the fall of Roger Ailes, the head of conservative cable Fox news, due to a sexual harassment lawsuit instigated by several star journalists working at the network.

This takedown of a power magnate in 2016 occurred a year before Harvey Weinstein and the #MeToo movement. However because Fox is not only President Trump's number one cheerleader, but also a staunch advocate of Republican values and strategies, it can be challenging for liberal/progressive viewers to find solidarity with real-life characters who perpetrated alternative facts and propaganda. To its credit, the movie shows how the willingness to come forward was complex and doesn't shy away from exposing their flaws and perhaps dubious motives. 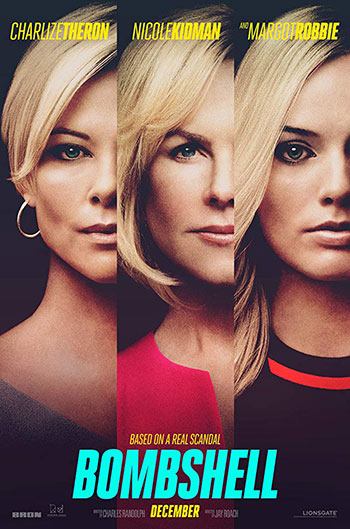 We are immediately introduced to Megyn Kelly (Charlize Theron), one of Fox's most popular newscasters, as she breaks the fourth wall and conducts a conspiratorial tour of the studio for viewers divulging all the power dynamics, paranoia, and fight for survival.

It is August 2015 as Kelly, one of the moderators of the Republican presidential debates, interrogates candidate Trump on his offensive treatment of women. Trump insultingly accuses Kelly of "anger-menstruating," transforming her into a cause celebre. Although Ailes (John Lithgow) wants her to assuage Trump (Fox needs him for ratings), privately he tells her "that was good TV. I'm proud of you."

In the generous essential 1.5 hour documentary bonus feature, sharp-witted screenwriter Charles Randolph (The Big Short) will call Kelly the narrative center of the movie, the Dante who guides the audience through this misogynist "hell."

The moral center will be Gretchen Carlson (Nicole Kidman) removed as co-anchor of the popular Fox and Friends Show demoted to a lesser program, after appearing on camera without makeup to protest the objectification of women on the International Day of the Girl.

An irate Ailes humiliates her screaming, "Nobody wants to watch a middle-aged woman sweat her way through menopause." Tired of his sexist comments/actions she initiates the lawsuit, not naming Fox because of contractual restrictions, but targeting Ailes, putting her career in jeopardy with the hope other women will speak up and join her.

Finally we meet Kayla Pospisil (Margaret Robbie), the emotional center, a composite of various employees who endured Ailes' lewd advances, a loyal twenty-something evangelical former weather announcer trying to get ahead at Fox. 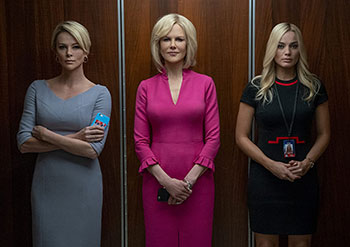 Her mentor, Jess Carr, (a subdued but appealing Kate McKinnon) is a closeted lesbian staffer, advising Kayla, "ask yourself what would scare your grandmother and piss off your grandfather: that's a Fox story." She seduces a drunken Kayla into bed hilariously having sex under a poster of Hillary Clinton, whom Jess secretly supports.

Selected by Ailes' secretary/pimp (a nefarious Holland Taylor) as his "type," Kayla endures a shame-inducing interview for an on-air spot, in which she must twirl around for him ("It's a visual medium") then raise her skirt higher and higher until he spies her panties.

This agonizing heart-rendering scene is crucial because the remainder of the movie rests on whether Kelly and other female victims will band together to stop not only Ailes' demeaning sexual intimidation, but the entire chauvinist Fox culture, with sexist comments disguised as "compliments," seductive male stares, and women required to wear short dresses uncovering their bare shapely legs.

The chief virtue of Bombshell is the rapport acting, with Academy Award nominee Thieron, a marvel who not only looks exactly like Kelly (due to the stupendous makeup stylist Kazu Hiro, a worthy Oscar) but becomes her, including her precise voice intonations, as well as her cold steeliness and unflappability.

Robbie surpasses Thieron, with her tender vulnerability and journey from innocent ingenue to disenchanted casualty, embodying the sheer degradation of sexual harassment. Lithgow, sporting prosthetic jowls, shines as the predatory, sleazy Ailes but hinting at the pain undergirding his manipulative behavior. Kidman is fine, but has less dramatic moments.

Director Jay Roach (Meet the Parents, Game Change) steers the picture in a sprightly cheeky vein, avoiding polemics, but lets the compelling serious moments evolve naturally. The film insinuates that while these females were victimized by this abusive male supremacy, they used it for their ambitious advantage to become rich and famous, a fact not lost on Kayla who tearfully confronts other characters for failing to warn women who might have been spared her ordeal.

How audiences weigh their complicity will determine how empathetic they will feel towards Bombshell. Yet as producer Theron remarks "if we are going to fight for women to have equal rights and a safe work environment, we can't pick and choose who that is for. We're all in the same boat."