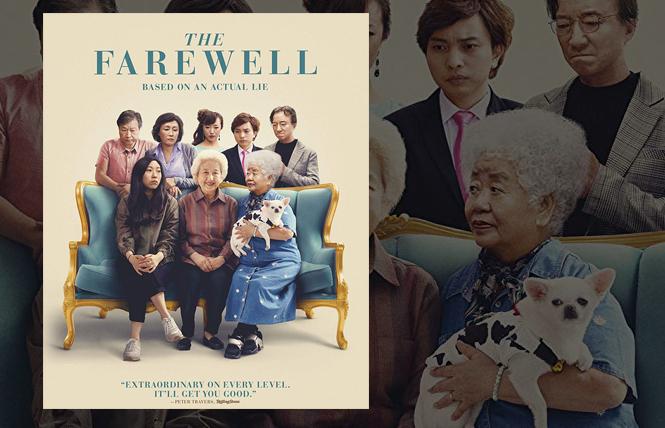 The Academy made a colossal mistake not nominating "The Farewell" as one of its Best Picture nominees. It was one of 2019's finest films, featuring original work by Lulu Wang, one of the female directors also ignored by the Oscars. Just released on Blu-ray by Lionsgate and comically introduced as "based on an actual lie," it is from Wang's true-to-life experience. The story feels real, as does the family it depicts undergoing the heart-wrenching potential death of its matriarch. The film does not sacrifice laughs and manages to avoid racial stereotypes, mawkishness, and squeamishness.

Billi Wang (Awkwafina), a struggling 30-year-old artist in Brooklyn, hears that her beloved Nai Nai (Mandarin for Grandma), who lives in the northern Chinese city of Changchun, was diagnosed with Stage 4 lung cancer and has only a few months to live. Her distraught parents (Tzi Ma and Diana Lin, both wonderful) are returning to China along with the rest of the family to spend time with Nai Nai (Zhao Shuzen), their first reunion in 25 years. But the family has decided not to tell her the truth and is coming home under the ruse of celebrating the marriage of Billi's cousin. Nobody wants Billi to visit, as she can't hide her emotions. But Billi decides on her own to travel to China. She will be reconnecting with a China she left when she was a child, clinging to fond memories of it. Can the family maintain the deception? Will Billi play along with the charade? Does Nai Nai discover the lie?

In China, where the family and society rank over the individual, it's considered a good lie to keep a dire diagnosis from a patient. They believe it's the fear, rather than the disease, that kills people. In love, the family takes the responsibility and bears the emotional burden for her. In an insightful conversation on the Blu-ray, Wang admits she isn't sure if this is the right way to deal with imminent death.

The movie's theme of how secrets and lies impact family dynamics will resonate for LGBTQ audiences, provoking the question, Can it be best to lie about one's personal life? "Farewell" works because it balances melancholy with comic relief, contrasting the strengths of China and America. Wang also contrasts Nai Nai's unconditional love for Billi vs. her parents' love, which seems dependent on how she performs.

Zhao Shuzen is a marvel as Nai Nai, who bosses everyone, to make herself feel important but also to take control of overwhelming circumstances. Her scenes with Billi are effervescent as she encourages Billi to live her dreams. "Life is not about what you do, but about how you do it." Awkwafina, known for her comic roles, makes the most of a dramatic role, portraying subtlety, irony, and honesty. Wang opens the door for other ethnic filmmakers to universalize their personal stories on their terms. This wise, culturally observant movie, with its surprise ending, is a triumph, even without Oscar recognition.