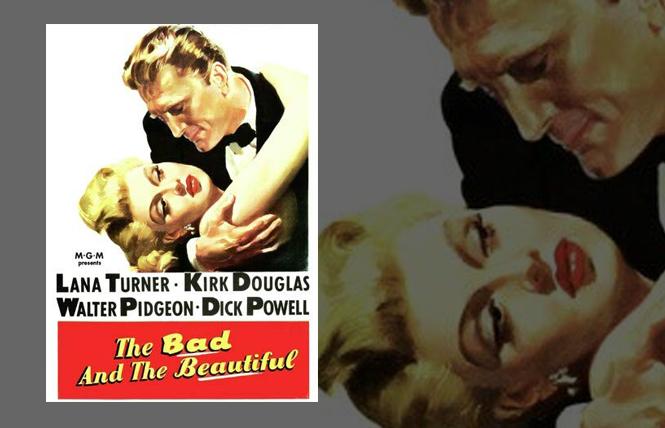 The American movie industry has long been gripped by the danger yet potent appeal of stardom. Examples include gay director George Cukor's "What Price Hollywood?" (1932), remade in 1937 by William Wellman as "A Star Is Born," filmed again by Cukor in 1954, by Frank Pierson in 1976, and by Bradley Cooper in 2018. Billy Wilder's "Sunset Boulevard" (1950) is the darkest, most corrosive view of what exceptional fame can do to a person. Less well-known but equally revealing is gay director Vincente Minnelli's "The Bad and the Beautiful" (1952). It has recently been released for home viewing using the new 4K technique, which restores the original cinematography to its sharp contrasts of deep blacks, pristine whites, and rich grays.

Fabled, egomaniacal producer Jonathan Shields (Kirk Douglas) has betrayed the people who helped make him a legend. Actress Georgia Lawrence (Lana Turner), director Fred Amiel (Barry Sullivan), and writer James Lee Bartlow (Dick Powell) want nothing to do with him. They make that emphatically clear to studio honcho Harry Pebbel (Walter Pigeon), who is much more practical. He is willing to forget the past if doing so means he will release more hit pictures produced by Jonathan.

In beautifully filmed flashbacks, Harry smoothly reminds each of them of how much they owe Jonathan. Georgia, the daughter of a famous, John Barrymore-type actor, was an unemployable drunk. Jonathan saw beyond that, conquered her self-pitying hostility, warned her that her looks would fade if she didn't quit the bottle, and gave her a part. "You acted badly, you moved clumsily, but the point is however bad you were, every eye in the audience was on you" is as good a definition of screen stardom as any. She fell in love with him, a big mistake, but survived to become a major star.

He recognized Fred's talent and gave him the opportunity to direct, helping him refine his innate gifts and develop his own vision. Without Shields, he would probably have remained a director of B pictures made on shoestring budgets with minor actors.

James Lee wrote critically admired novels that few people read. But Shields asked him to adapt one for a film. It was a success. Bartlow moved to Hollywood with his vivacious, southern-belle wife Rosemary (Gloria Grahame), and they thrived. His books sold, and he adapted them for well-regarded, popular pictures.

Each is forced to acknowledge the truth in what Harry tells them. But they still don't want anything to do with Jonathan — or so they say. But clever Harry gets them to listen to Jonathan's pitch about his latest project. Will they resist his potent appeal?

Minnelli faultlessly guides his large cast. He brings out the best in each one, often getting atypical performances. His justly famed eye for beauty is evident in every scene.

Turner, first billed (she was still under contract to MGM, the film's studio), is magnificently photographed. Seldom an effective actress, here she often rises to meet Minnelli's demands and has some memorable moments, including a hypnotically overdone scene crying hysterically while driving a car in heavy rain. Try not to watch. She is believable as a movie star, if not as a great thespian, which is an example of perfect casting.

Douglas, in an Oscar-nominated performance, is at his most intense. He doesn't sugarcoat Jonathan's combination of amoral narcissism, bullying, creativity, imagination, charm, and utter confidence in his own genius. He doesn't ask for sympathy but demands admiration. It's a riveting performance that holds the movie together.

Pigeon, another MGM star, is at his most engaged. Best-known for his roles opposite Greer Garson in which he dutifully played a kind, supportive husband to her noble wife and mother, he here reveals a sly intelligence, a willingness to manipulate anyone for their (and his studio's) good.

Powell, who began at Warner Bros. in the 1930s as a musical comedy star in Busby Berkeley films opposite Ruby Keeler and one-time wife Joan Blondell, remade himself as Raymond Chandler's Philip Marlowe in "Murder My Sweet" (1944). He is totally believable as a pipe-smoking, thoughtful writer balancing commercial success and artistic integrity. He is touching when learning that his seemingly adoring wife has run off with Latin-lover movie star El Gaucho (sexy Gilbert Roland). Her betrayal has fateful consequences.

As that sexy, unfaithful wife, Gloria Grahame steals each of her scenes. She knows her husband can barely keep his hands off her. "James Lee, you have a naughty mind, I'm happy to say," she purrs. When her flirting with Gaucho at a party angers him, her allure easily tames him. She won the Best Supporting Actress Academy Award for her brilliant performance.

Sullivan, a fine actor who seldom got leading parts or the recognition he merited, makes the most of a good role in a top film. Roland is appropriately magnetic and macho. With Leo G. Carroll and Paul Stewart.

Charles Schnee won an Oscar for adapting George Bradshaw's story, which was reportedly based on legendary Broadway producer Jed Harris. Independent film mogul David Selznick ("Gone With the Wind") felt it was about him and threatened to sue for defamation, but eventually backed down. Sometimes life imitates art.

Helen Rose won an Oscar for the costumes. Robert Surtees' exceptional cinematography garnered an Academy Award, as did the art direction-set decoration by Cedric Gibbons, Edward Carfagno, Edwin B. Willis and Keogh Gleason. Surprisingly, it wasn't among the Best Picture nominees. The winner that year was the risible "The Greatest Show on Earth." Minnelli was also overlooked. He would win the Best Director prize for 1958's "Gigi."