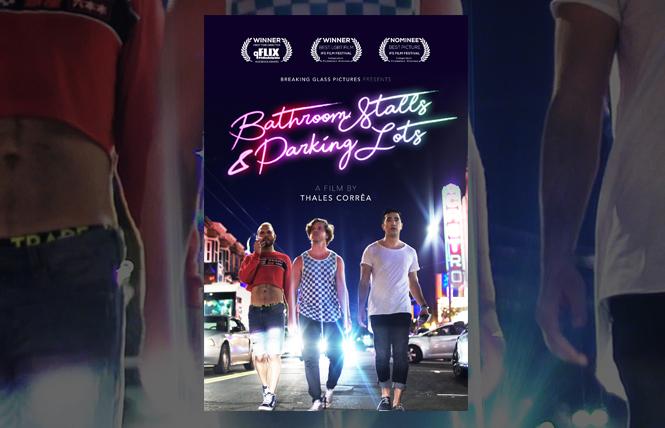 "Bathroom Stalls & Parking Lots" is the latest film from auteur Thales Correa, now available on DVD. Los Angeles resident Brazilian emigre Leo (Correa) comes to San Francisco, where he and his friend Donnie (Izzy Palazzini) spend a wild night looking for Leo's Grindr hook-up in the Castro. The evening takes them on a wild ride through various clubs, where the often-shallow world of gay dating and hook-ups causes them to question what they want from their lives. For the first half of their journey, they're joined by Donnie's American friend Hunter (Oscar Mansky), who may not be as straight as he claims to be.

Leo, Donnie and Hunter couldn't be more different. Leo is a hopeless romantic who believes his Grindr hookup could be "the one," while Donnie is determined to continue pursuing a life of sex, drugs and rock-n-roll. Hunter, first seen having sex with his girlfriend, keeps reminding the other two guys how "straight" he is, even as he parties with them in gay clubs and joins them on their search for Leo's dream guy. It's quickly made clear that Hunter and Donnie's friendship isn't all that platonic.

The guys' night, roaming from one gay club to the next, becomes the director's commentary on the shallowness of the gay dating scene. Though it's the kind of life that Donnie has chosen — he rebuffs a cute young fuck-buddy who offers him more — Leo wants something better.

The film doesn't have much of a plot. It meanders from one episode to the next, painting a portrait of a hedonistic lifestyle that offers momentary satisfaction but rarely anything of substance. After Hunter says his goodnights, Leo and Donnie go to an underwear party at a house in the hills, then hook up with two other guys, who throw them out when Leo declines their offer of meth.

In some scenes Donnie and Leo talk to each other in Portuguese. These scenes are accompanied by subtitles that flash across the screen so quickly they're difficult to follow, making small portions of the film unintelligible.

The acting is good. Correa effectively conveys Leo's frustration that he's not as important as he thought to his Grindr guy. Mansky, who unfortunately is MIA from the second half of the film, offers a scene-stealing performance as Hunter, the "straight" guy who loves to hang out in gay clubs and seems to be a bit more "queeny" than most straight guys.

San Francisco viewers will enjoy the location shooting around the Castro. The actors walk by iconic locations such as the Castro Theatre and Cliff's Variety. The Market Street historic streetcar is seen in a number of shots. There's a lengthy sequence set in Beaux, the popular Castro nightspot. The film is a lovely travelogue of the gayborhood.

This is an impressive first feature, with Correa showing undeniable talent. According to his IMDB page, he has another film in the works. It will be interesting to see what he does next. Also available at YouTube, Amazon Prime, Google Play and Vudu.