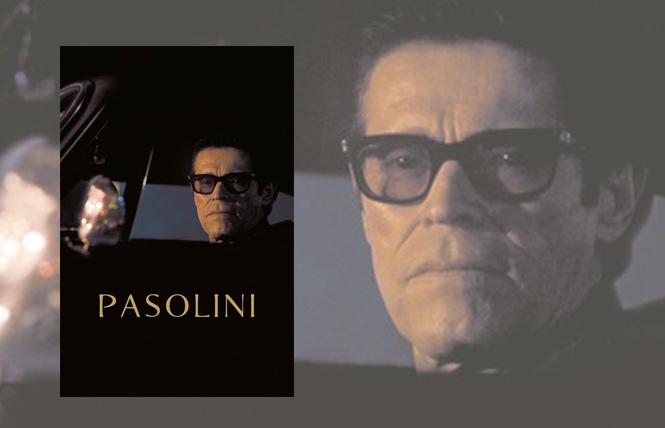 "I think to scandalize is a right, to be scandalized is a pleasure, and those who refuse to be scandalized are moralists." This quote by Pier Paolo Pasolini (1922-75) sums up his iconoclastic career as a gay Italian film director, poet, novelist, journalist, actor, playwright, political figure, philosopher, and intellectual. A Renaissance-type artist, he was a maverick Marxist who was an ardent critic of consumerism and an atheist who created "The Gospel According to St. Matthew," considered by many critics the greatest film ever made about Jesus. In this mass of contradictions, he sought to shock, to oppose the complacency, corruption, and injustice of Italian society, through the use of violence and sexuality. Abel Ferrara's biopic "Pasolini" (2014), given a brief theatrical release earlier this year, has just been released on Blu-ray by Kino Lorber. In many ways this film is as indefinable as Pasolini himself, conjuring divergent opinions of Pasolini's work.

The film centers on the last hours (All Soul's Day) of Pasolini's (Willem Dafoe) life, having returned from Sweden after meeting with director Ingmar Bergman. He is doing postproduction work on his final film, a political allegory, "Salo, or the 120 Days of Sodom by Marquis de Sade," still regarded as the most controversial movie ever made. He works from home during the day, with cousin Graziella, his acting secretary, bringing him coffee as Pasolini reads the morning papers, edits his manuscripts, sketches storyboards, takes phone calls, is interviewed by a reporter, talks about the novel he's working on "Petrolio," envisions his next film project, "Porno-Teo-Kolossal" (starring Ninetto Davoli, Pasolini's great love, muse, and actor, who starred in several of his films), lunches with his mother Susanna (Adrianna Asti, who starred in his first film, "Accattoni," 1961), and visits friends, including actress Laura Betti (Maria de Medeiros).

In the evening he will drive his Alfa Romeo through poverty-stricken neighborhoods, cruising for rough trade and picking up 17-year-old Pino Pelosi, then journeys to the beach in Ostia, where he will be beaten up by a gang of hustlers, left unconscious in an almost crucified position, then run over by his own car, either inadvertently or deliberately by Pelosi. There remains much controversy about Pasolini's death. Many people claim it was a conspiracy, a political martyrdom for his subversive views, but Ferrara presents it in an almost operatic setting as a homophobic assault.

"Pasolini" abandons linear narrative. It's impressionistic, like a visual elegiac poem in a pastiche neo-documentary style. Anyone seeking biographical details about Pasolini will be frustrated, as it speaks primarily to those already familiar with his life and work. In the 22-minute bonus feature with Abel Ferrara and Willem Dafoe in conversation, they both claim this final day encapsulates his entire achievements and thinking. Ferrara saw Pasolini as his teacher and fellow fearless rebel spirit, relishing his quote, "My cinema is an explosion for my love of reality." He sees Pasolini as a prophet railing against the violence and consumerism of our times, echoing Pasolini's suggested title of his final interview, "We are all in danger."

Starting with Pasolini, Dafoe, now 63, has begun a late-career renaissance, including his Oscar-nominated performances in "The Florida Project" (2017) and as Vincent Van Gogh in "Eternity's Gate" (2018). With his sunglasses and stern glances, Dafoe not only physically resembles Pasolini, and speaks both Italian and English, but convincingly captures his intellectual demeanor and his paradoxical nature, including both conservative and radical impulses. Dafoe gives a commanding performance, especially in the nearly unbearable end. No doubt this impulse explains Ferrara's decision to act out portions of both the unfinished "Petrolio," about a plane crash; and "Porno-Tel-Kolossal," an intriguing fantasia about two gay holy fools on a quest for the messiah who wander into a gay and lesbian community that comes together once a year to reproduce children. Unfortunately, these stories-within-a-story disturb the narrative leading to Pasolini's death, and seem more like Ferrara's meditations on Pasolini, a straight interpretation of gay Eros, than anything Pasolini might have made.

Still, Ferrara manages to strip away the myth and create a portrait of an artist who lived by his own rules and sought to expand the boundaries of cinema and language. For both Pasolini and Ferrara, all life is politics, including sex. We must still wait for a definitive screen biography of Pasolini, but despite its limitations, "Pasolini" the film makes clear why Pasolini the artist still has much to say to us in the 21st century.