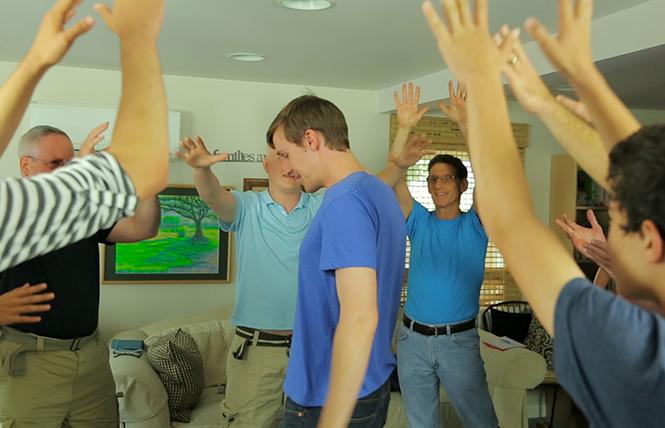 Last year's release of the mainstream Hollywood film "Boy Erased," based on the real-life experiences of Gerard Conley, shined a spotlight on gay conversion therapy, also called reparative therapy, in which attempts are made to change one's sexual orientation or gender identity. This therapy has been proven to be futile, discredited by every major American medical, psychiatric, and psychological organization. Banned on the use of LGBTQ minors in 11 states, it's still legal for adults. While media publicity has brought this clandestine practice to public attention, its actual logistics remain surreptitious. But with the release of filmmaker Richard Yeagley's fly-on-the-wall documentary "The Sunday Sessions" on DVD by FirstRun Features, the behind-the-scenes footage reveals how this manipulative process works. 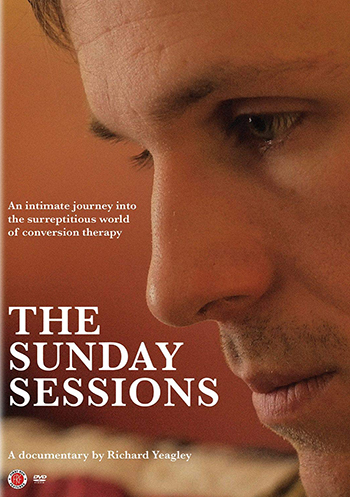 Yeagley follows the journey of 26-year-old Nathan Gniewek, a struggling actor and devoted but conflicted Christian who lives in rural Virginia, as he tries to reconcile his religious convictions with his sexual identity. Yeagley was given unfettered access as Nathan struggles with "same-sex attraction (SSA)" and attends sessions with therapist Christopher Doyle in his home, a weekend retreat camp in which gay men are taught to be more masculine. He also gets counseling with his family. Doyle, a "success story" in that he's been married for nine years to a woman and has sired five children, is shown being interviewed on TV by Dr. Oz as he answers criticisms of conversion therapy. Doyle notices that Nathan is self-deprecating, making passive-aggressive remarks about himself that act as defense mechanisms. Doyle believes Nathan was mistreated by others and never defended himself, so he challenges him "to grow a pair of balls" in intimidating role-play scenarios. The only way to get rid of SSA is to deal with underlying (debunked) issues such as an emotionally distant father, a controlling mother, or possible molestation.

Nathan brings his best friend, atheist hairdresser Cameron, a potential sex partner, to therapy, but Cameron resists Doyle's approach. Later Doyle tells Nathan to limit his contact with Cameron, despite their lively connection, which will leave him depressed and angry. The camp scenes — bullying, role-playing, and self-esteem exercises, all to build manliness — come across as unintentionally satirical, not to mention ineffective. The most devastating scenes are Doyle's confrontative sessions with Nathan and his parents, who actually are willing to accept him "no matter what," yet are forced to apologize for how they have failed him. Eventually Doyle recommends Nathan meet him twice a month, but won't allow the camera into those sessions. Doyle renames his treatment "Sexual Identity Affirming Therapy," relocating to an office, a rebranding possibly to gain professional legitimacy and perhaps circumvent the law, since conversion therapy is illegal in Maryland, where he practices.

Nathan's willingness to expose his life and turmoil to Yeagley is commendable. He enjoys performing as an actor, both on stage and arguably in his daily life. Yeagley crafts a gripping psychological thriller as we guess what Nathan's outcome will be. In his director's statement, Yeagley rejects an advocacy-based approach. "I knew I had to strip myself of bias, and approach the film as objectively as possible." He succeeds, even as he admits that when "things started to get emotionally dark for Nathan, I wanted to give him a hug and tell him everything would be alright and recommend he move to a city like New York or Washington, DC, where there's more diversity and a bigger support system for the LGBTQ community."

Yeagley doesn't blame Nathan's faith. He includes a scene where Nathan recites a religious passage about values leading people to realize themselves fully. But in this therapy Nathan seems to be doing the opposite, abandoning authenticity. LGBTQ viewers will likely want to shake Nathan and tell him he's fine as he is, even when he seems to be his own worst enemy. We might scream at the screen at the unprofessional shaming techniques and thought control Doyle uses to coerce Nathan, and at the disappointing ending. In a postscript, according to a Jan. 18 Baltimore Sun article, Doyle has filed a federal lawsuit seeking to overturn Maryland's ban on treating minors with conversion therapy, saying the ban violated his rights to free speech and the practice of religion, as well as the rights of clients "to prioritize their religious and moral values above unwanted same-sex sexual attractions, behaviors, or identities." (Plays the Roxie, 2/26.)