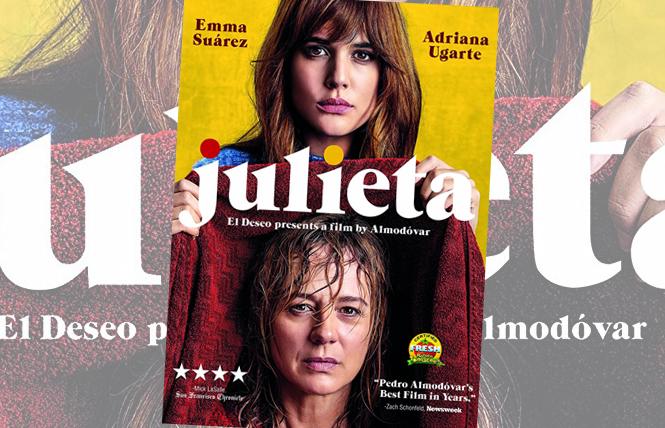 Bisexual poet Edna St. Vincent Millay wrote in a letter, "Where you used to be, there is a hole in the world, which I find myself constantly walking around in the daytime and falling in at night. I miss you like hell." This sentiment could have been uttered by the main character of "Julieta," the latest Pedro Almodovar film from Spain released on DVD by Sony Pictures Classics. She is obsessed by the loss of her daughter, transforming herself into a martyr, writing in her journal, "Your absence fills my life and destroys it from the inside." Almodovar is back in top form with his best film since 2006's "Volver." As the foremost director of actresses since George Cukor, he once again explores the inner life of women. In "Julieta" he adapts a trilogy of linked short stories from Canadian writer Alice Munro, transplanting the action from Vancouver to Madrid.

The film opens with the middle-aged Julieta (Emma Suarez) packing up her apartment ready to move to Portugal with her lover Lorenzo (Dario Grandinetti). She is crossing the street when she meets Beatriz (Michelle Jenner), a friend of her daughter who tells her she just saw Antia (Blanca Pares) at Lake Como, and she has three children. Unbeknownst to Bea, Julieta hasn't seen or heard from Antia for years. This new information sends her into a tailspin depression, catapulting her back into the past and a sea of regrets as she breaks off her relationship with Lorenzo. She moves back to the old apartment where she raised Antia, and begins writing a journal reminiscing about her history.

Suddenly it is 1985 and we see the young Julieta (Adriana Ugarte) with spiky blond hair, a classics graduate on her way to her first teaching job, sitting in a train compartment opposite an older man who attempts to chat with her. Fleeing, she runs into the hunky fisherman Xoan (Daniel Grao: the gay Almodovar always chooses gorgeous men for his leads). They become friendly, make love, and he comforts her when the middle-aged stranger she'd met earlier commits suicide, for which she feels guilty. The next scene shows the couple moving to his small coastal town after Xoan's comatose wife has died. They raise daughter Antia with the help of initially resentful housekeeper Marian (Almodovar regular Rossy de Palma), and Julieta befriends Xoan's former lover Ava (Inma Cuesta), a sculptress of phallic statues. Julieta travels with Antia to visit her aging parents, and is stunned to realize her father is having an affair with her Alzheimer's-afflicted mother's caregiver.

Julieta discovers Xoan has been reigniting his relationship with Antia, which leads to an argument. Xoan stomps out and goes fishing, but later drowns in a storm. Antia has been at a camp where she meets and befriends Beatriz. Julieta must relay the bad news. Julieta feels tremendous guilt. Ava and Beatriz help her to cope. A few years later, somewhat recovered, Julieta is on her way to pick up the 18-year-old Antia from a retreat in the Pyrenees when she is told Antia no longer wants to see her, having discovered faith. Julieta has no way to find her, not understanding why Antia has abandoned her. She becomes obsessed by this loss. Will Julieta find Antia?

Stock Almodovar themes such as coincidence, betrayal, fate, and ambiguous morality make their appearance. There is even a surprise LGBT twist in the plot. Almodovar continues to blend standard genres, and here we have the Hollywood women's picture coupled with a noirish mystery thriller as to Antia's whereabouts. The dreamlike train scene and the loyal housekeeper devoted to Xoan's first wife recall Hitchcock, while the melodramatic elements and luxurious visual presentation pay homage to Douglas Sirk. The strained mother-daughter relationship hints at "Mildred Pierce," with the all-sacrificing mother a nod to "Stella Dallas."

"Julieta" was Spain's entry for the Best Foreign Language Oscar of 2016 yet missed the shortlist. But the movie finds Almodovar in total control of his artistry, reinforcing his title as Europe's greatest living film director.