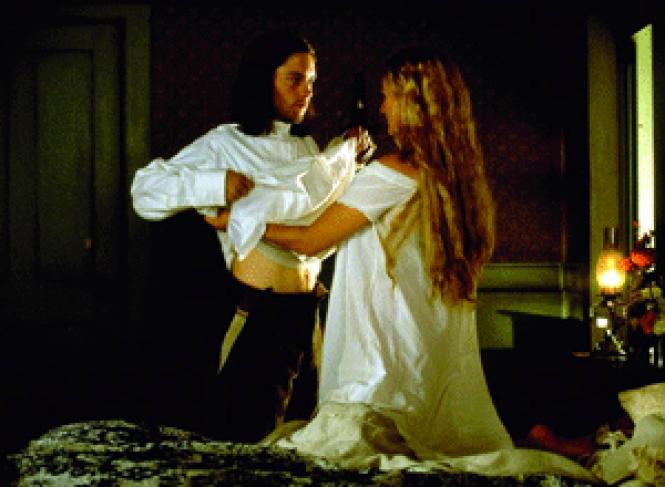 Scene from Ride with the Devil
.

This week we find buried treasure on DVD. Ride with the Devil is a critically important, exhilarating film from director Ang Lee, who, with his friend, writing partner and producer James Schamus, has given us three top-drawer queer-themed films: The Wedding Banquet, Brokeback Mountain and Taking Woodstock. In deciding to adapt Daniel Woodrell's Civil War novel Woe to Live On By, Lee and Schamus were embarking on an unusually daunting challenge, even by their illustrious standards: translating a little-known sidebar of America's greatest domestic crisis into popular entertainment, and attempting to shoot an epic on an independent-film budget, with a largely unknown cast of 20something actors, many of whom were just making their first stab at stardom.

In a DVD commentary track recorded for this Criterion Collection edition, Schamus admits that Ride with the Devil is a kind of accidental dress rehearsal for their future saga of cowboys in love.

"So clearly this is Brokeback Mountain territory that we're in now – a bunch of guys living in the woods, hanging out, loving each other. Ang has always been drawn to stories of friendship, and particularly to the nature of male friendship in his work, and no more so than in Ride with the Devil ."

Ang Lee is even more direct in noting this Civil War story's roiling queer subtext. "It's a coming-of-age story, young boys, their competitive jealousies all play out. When I did this film, I had done The Wedding Banquet. I'm not that innocent about putting homosexual scenes on the screen. When you do this scene, you can't help but see that some of the flamboyant characters might be gay themselves. The book never illustrated that, and this is not a project about that issue, but you can see the gay subtext all over the place. Somehow I feel I'm doing another gay film in this one. Actually, it plays pretty innocently as friendship, as affection, as living together, but all the psychology is going on."

Ang Lee's 1999 "pre-Western," a bloody lost chapter of our Civil War, features a stellar ensemble. Tobey Maguire shines as an idealistic German American teen (Jake "Dutchie" Roedel) fighting with Southern guerrillas in Bloody Kansas/Marauding Missouri, who undergoes a change of heart after bonding with a newly freed slave, Daniel Holt (Jeffrey Wright). The acting gem in this epic is the hair-raising rivalry between Maguire and a feral young killer. Jonathan Rhys-Meyers imbues his Pitt Mackeson with the cultural/racial mojo we associate with flying the Confederate flag. The young Irish actor – with his skinny torso, angular features, shoulder-length hair, dandy attire and cold eyes – becomes a kind of androgynous Clint Eastwood, with a scary bi-polar charm that foreshadows the transformation of soldiers into outlaws (Jesse James), as well as a preview of his tennis-pro killer in Woody Allen's Match Point.

The "Tobey/Johnny" showdown displays a screen chemistry that could have produced an alternative Jack and Ennis if Lee had got the Brokeback gig a few years earlier.

Writer Schamus adroitly employs language to undercut our intoxication for re-fighting the Civil War from a Southern perspective. "Johnny" is simultaneously sexy and menacing as he spits out Tobey's derogatory screen nickname, "Dutchie," with murderous intent.

In a heart-stopping scene, Pitt and Jake nearly shoot it out in a Lawrence, Kansas restaurant, as in the background, their "bushwacker" buddies conduct a vicious massacre of the able-bodied male townfolks. This well-documented piece of history qualifies as one of the worst atrocities in the entire war. The scene is given a gut-wrenching verisimilitude by the intensity of the actors and the beautifully archaic, at times profane, and oddly formal words they hurl at each other.

Pitt – Rhys-Meyers dressed and cavorting, at Lee's suggestion, like a modern rock star (like his character in Todd Haynes' Velvet Goldmine) – demands that Jake allow two civilians (an old man and a small boy) to go outside to face execution. Jake demurs.

"We'll attend to them once we've had our vittles."

"And when do you figure to do this mean thing to me, Mackeson? Is this very moment convenient for you? It is for me." (Jake draws on Pitt.)

"The hell with it, there's plenty more of them jayhawkers to kill, anyhow. I'll see you back in Missouri, you tiny little sack of shit!"

After spitting out those words, Mackeson leaves the building the way Jagger might, with a swish of his hips, his right hand twirling in a rude gesture. Mackeson's homicidal/suicidal manner is doubly scary. It allows him to waltz through the killing fields with a kind of satanic immunity.

Flipping back to Lee's commentary track, you'll get a vicarious charge from hearing the director chuckling as he repeats Pitt's oath in jest, indicating his creative satisfaction with how this first of two non-shooting shootouts was pulled off by his actor desperadoes. Lee and Schamus are scrupulous in using the Southerners' 19th-century English to signal an odd code of chivalry that lies beneath the raw violence of the main plot. Later this language will prove a crucial underpinning for a magnificent scene where Holt stops fighting for the Confederacy and declares his emancipation. It's a finale that has him and Jake salute each other in a tribute to the journey they've been on: the white boy addresses a former slave by his full Christian name, "Daniel Holt," to be followed by Holt's lovingly uttered "Jake Roedel," just before heading out to the frontier to become a symbolic first black cowboy.

The film is graced by Tobey Maguire's first adult role (and sex scene). He projects an inner decency while shedding puppy-dog innocence: a screen test for Peter Parker.

Special features include two commentary tracks: the first with Lee and Schamus; the second with the crew; a video chat with Jeffrey Wright; and a booklet with background on the historical events that inspired Woodrell's novel.