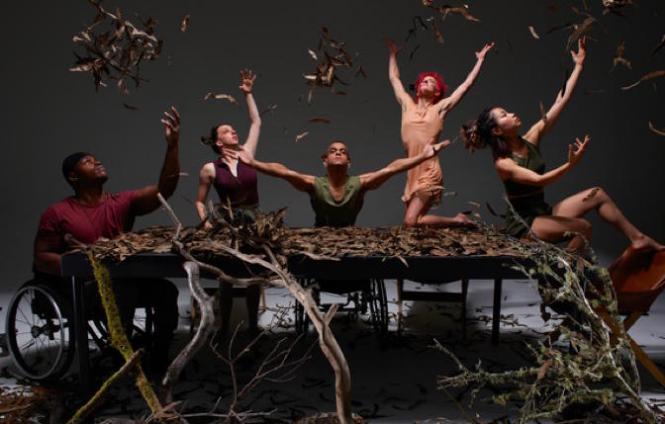 After five years as Artistic Director of AXIS Dance Company, choreographer Marc Brew closes his tenure with a new disability-inclusive dance about finding home; all before he'll soon be moving to his own new home in the U.K. with his partner.

Three dances will premiere at re:surge, the company's concerts at Z Space on October 22 and 23. Brew's "Roots Above Ground" focuses on his personal experience as a disabled gay man and immigrant, and his journey to find home.

This is the first live concert for AXIS Dance after a year and a half of closure, remote classes and online discussions, tutorials (on the company's YouTube channel) and remote rehearsals. The company's Choreo-Lab recently opened for disability-focused and physically integrated dance studies. 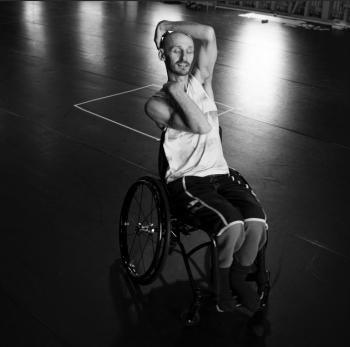 Brew's connection to AXIS Dance goes back to 2011, when he was first commissioned to set a work on the company. In a phone interview with the Bay Area Reporter from his Oakland apartment, he discussed his new dance, his work with AXIS, and the road ahead.

"Some people have said that I raised the artistry of the company," said Brew, while maintaining a humble tone. "I brought in different dancers, we increased training to five day a week. The commissions were more challenging, and we also raised the diversity of the dancers and their abilities and skills; just a different artistic voice."

Brew trained as a professional dancer at the Victorian College of the Arts Secondary School and The Australian Ballet School. He's worked in the U.K. and Internationally for the past 20 years as a director, choreographer, dancer, teacher and speaker; with the Australian Ballet Company, State Theatre Ballet Company of South Africa, Infinity Dance Theatre, CandoCo Dance Company. He's traveled the world performing his works, setting works as a guest choreographer, and with his own company, at festivals in multiple countries, with both disabled and able-bodied dancers.

Since setting his dance "Full of Words" on the company in 2011, then-director Judy Smith asked Brew back for their Summer Intensive program, then served as guest director, and eventually took on the position full-time in 2017.

AXIS Dance Company, the nation's most acclaimed ensembles of disabled and non-disabled performers, celebrated its 30th anniversary in 2017. Brew will travel with the company on their tour to Frankfurt, Germany's Tanz Festival in November, then head off to Scotland while the company performs in Dubai for another concert. 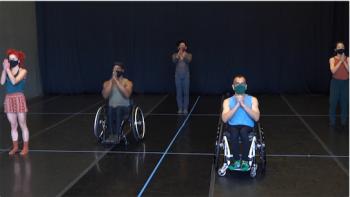 Finding home
Asked about his new work, "Roots Above Ground," which will be part of both the new season and the tour repertory, Brew said, "I was supposed to make a new piece last year, and of course that never happened. But this piece was started pre-COVID. I've been to many countries, from Australia to South Africa to England, and traveled and worked around the globe. It made me think, 'Who am I?' The idea of land ownership made me question that."

Brew connected with the immigrant group East Bay Sanctuary Covenant. "We had monthly gatherings, where they shared amazing stories. That led to movement workshops where we used their stories to embody and express their experiences. That led me to my journey."

Developing the work about the idea of 'home' continued remotely, "in isolation in our homes," Brew noted, "which was not how I expected, but it really informed the material. People had a different way of feeling about home, while trying to stay invigorated and inspired to work. We haven't had that much time to be together."

Some parts of the dance started from solos created separately. As Joe Goode's Annex in San Francisco re-opened as a rehearsal space (the company's Oakland base, Malonga Arts Center, remains closed), social distancing effected the dancing as well, with spatial restrictions in the studio. Performers have to be repeatedly tested for COVID as well.

"There've been lots of challenges," said Brew. "That added another level to this process, with everyone being together, but in their own little squares. I looked at different ways to blend the movement, with canons, symmetry, and other techniques. I needed to find a creative way to make the separate solos make sense."

To add to his challenges, Brew had flown back to Scotland (where he's lived for many years) for a two-week vacation, but couldn't return without U.S. citizenship or a Green Card.

"I had to apply for a national interest exemption, but they weren't taking appointments at the U.S. Embassy, so it took thirteen months to get back here."

Brew was able to return in August, where he worked to blend the solos with more of his trademark intense partnering, with some solos combined.

Another new aspect brought in Deaf consultants Antoine Hunter and Zahna Simon to incorporate ASL into the movement, not as a usual side-stage option. Filmed segments, music and lyrics will also be woven into the work.

"I'm trying to create an immersive yet accessible experience," said Brew, "for people to connect their idea of home and belonging, the need to feel part of a community."

As with his other dances set on the company, Brew hopes "Roots Above Ground" will remain part of their repertory.

"They'll perform it more this year and into next year."

Brew noted that another premiere, the new dance by Neve Mazique Bianco, is the first commission from the Pina Bausch Foundation, where Bianco was recently a Fellow.

"It had to be created virtually, and part of the process of learning to create, with so much to express, is the reality of time," said Brew. "Along with funding, it created a new pathway for disabled choreographers."

Rounding out the program, Sonshereé Giles' "Hold Fast," a collection of duets, promises to feature the vibrant moves of its creator. 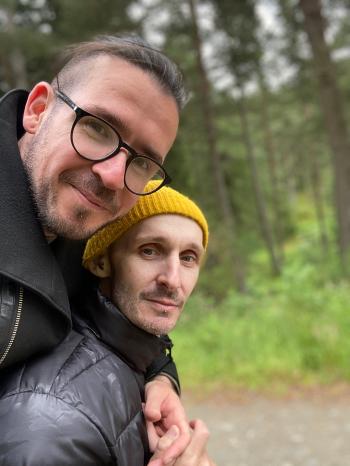 Roots
Asked about his plans for the future, Brew mentioned some upcoming freelance commissioned choreography work in Germany and Norway.

"I'm going to focus on my work. Even though I've loved all the challenges and opportunities as a director with AXIS, the artist in me has had to go to sleep for a while. I'm looking forward to reigniting the artistic spark in myself."

And, referring back to his new dance's themes of home, he's also looking forward to "laying down roots" with his boyfriend of six years, Matthew Kitson, in their renovated country house near Glasgow, along with their two dogs and a few ducks.

"I've been here mostly, and we have been able to see each other in other countries, but it'll be nice to settle in. The house has an old historic feel to it, but it's all new on the inside."