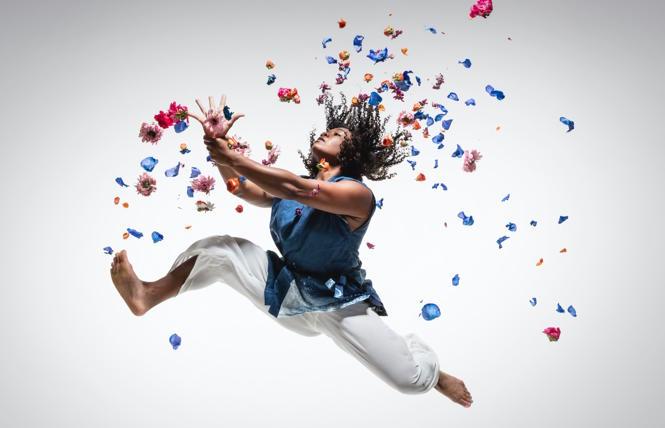 While theatres in the Bay Area tentatively begin to welcome back audiences after eighteen months due to the pandemic, many performing arts organizations are looking to alternative venues that minimize audience size while maximizing fresh, outdoor air.

For most companies, the challenges of working in nontraditional and outdoor performance spaces have proved to be daunting. But for Joe Goode, who, for more than 30 years has staged countless works outdoors —as well as in such iconic locations as Grace Cathedral and the Old Mint building— it seems natural that his company will kick off San Francisco's fall dance season with A Time of Change, a site-specific world premiere staged in indoor and outdoor locations around the Haight.

The historic Doolan-Larson Building on the corner of Haight and Ashbury, a famous site of hippie counterculture, is a main location. The production will feature a series of pop-up performances with original music, monologues and dance/movement.

Goode believes the freedoms of site-specific performance far outweigh the constraints of traditional theatre venues, saying, "My hope for live performance is that it becomes an experience. Something people can tell their friends, 'I did this thing! I was making choices, I was being surprised, things were emerging.' I just think that's what people need and want." 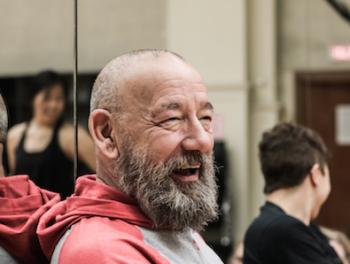 He goes on to say, "To ask audiences to harness their financial resources, make it to the theater, sit still in a velvet chair for hours, and watch a box? It's asking a lot. Honestly, I do a lot of napping in the theatre. I don't think audiences of the future will pay $200 to watch this very passive, presentational thing, and have no choice about what angle they see it from, or how close they can be to the performers. With installation work, you get the benefit of the place, its history and all its mojo. And as an audience member you can say, 'I think I'm going to stay away from that screaming naked man' or maybe you might say, 'I want to be closer to that naked man!'"

San Francisco Heritage, a local nonprofit that advocates to preserve San Francisco's architectural and cultural identity, approached Goode when they acquired the Doolan-Larsen Building, saying that they wanted to acknowledge and celebrate the Haight-Ashbury as a historic arts district.

Goode says, "I was super excited, because I have always been nostalgic for something I didn't fully participate in. During the 'Summer of Love' in 1967, I was a little queer boy in Virginia, dreaming of a different kind of freedom. But I remember seeing an article about it in Time magazine, with all those shirtless men and the girls with flowers in their hair, and the wonderful music and dancing, and it just looked like heaven." 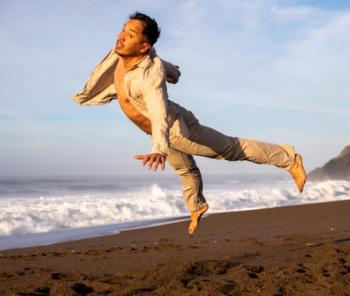 Melecio Estrella in his own work, 'These Lines are Living' at Rodeo Beach.  (Source:Jessica Swanson)

SF roots
Goode didn't arrive in San Francisco until 1979, saying, "I have a nostalgic vision of this utopian child-like lovingness and the wish for peace. As the years have passed, I thought it would be interesting to look at the dream of the hippies and ask who was it for, and how did it work out? The hippie movement was anti-capitalist, but now San Francisco is a place where none of my dancers can afford to live. The Bohemian culture is hanging on by its teeth; it's almost been erased by capitalism. I want to look at it through that lens, to celebrate the naiveté, the innocence, and the wish."

Goode says that he wanted A Time of Change to be "not just the white guy's vision" so he brought in two additional artistic collaborators: Melecio Estrella (Artistic Director of Bandaloop and Fog Beast) and queer Black choreographic duo Oysterknife (Chibueze Crouch and Gabriele Christian).

For Estrella, the Haight-Ashbury holds especially strong ties. "My mother grew up in the Haight," he said. "She went to grammar school and my parents got married at St. Agnes Church. My uncle's funeral was there and in 1983 I was the ring bearer at a wedding there."

St. Agnes Church, located on Masonic Street near Haight and Ashbury, is one of the locations where A Time of Change will be performed.

Having grown up in a family of musicians in the Bay Area, Estrella has made a name for himself as both a contemporary dancer with Joe Goode Performance Group (2004-2016), as well as a longtime member of Oakland-based Bandaloop, a troupe known for staging daring "vertical performances" on the sides of skyscrapers and mountains around the world. 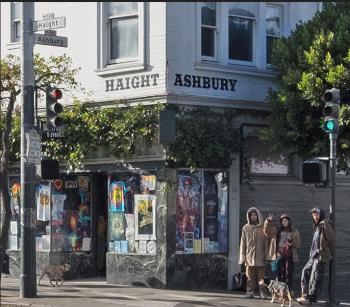 The historic Doolan-Larson Building on the corner of Haight and Ashbury.

Unlike most professional dancers, who begin training as young children, Estrella discovered dance in his late teens, having been a competitive gymnast.

"I loved tumbling and moving, but I had a rebellious spirit," he said. "I started going to raves and dance parties, and I met these people on the dance floor who were so committed to modern dance. That's how I found my way. The freedom of the dance floor is still so important to me."

Having been promoted to Artistic Director of Bandaloop in 2020, Estrella surprisingly admits, "I'm not really a daredevil, I'm actually kind of afraid of heights. But at Bandaloop, the culture of safety is so prevalent. It does take courage and bravery, but it's easier to train a dancer to climb, than to teach a climber to dance. I'm looking for dancers with a wide range of expressive movement... and a sense of adventure."

With A Time of Change, Estrella will be looking both upward and inward, questioning how1960s hippie counterculture has manifested itself in contemporary San Francisco, specifically in a location that embodies such contradiction.

"You have this corner of Haight and Ashbury, where people are still hanging out on the sidewalk as they have for decades, meeting up and sharing food," Estrella explained. "And across the street is a store selling a pair of shorts made to look vintage for $160. It's really hard to avoid the disparity. That's what was being addressed in the '60s, and here we are over 50 years later, still asking the same questions, about how we share and help each other meet basic needs. I hope that context comes forward in this work."

A Time of Change will be presented in outdoor and indoor locations in the Haight-Ashbury, Wednesdays-Sundays, September 1-12, 2021, 7:30pm. Tickets: $20-$125 www.joegoode.org