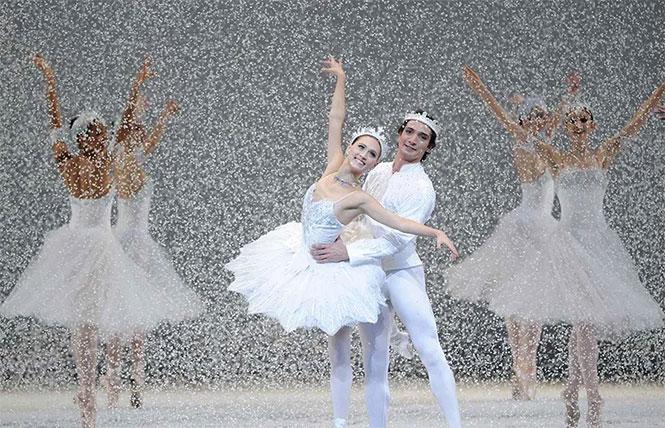 With lockdown restrictions, a gloom has descended on the holiday season with all in person concerts and performances canceled. But despite a make or break year for most arts groups, many Bay Area classical music and dance stalwarts have ingeniously risen to the occasion and are offering holiday entertainment virtually that also function as fundraisers.

All the events listed below are available for streaming through the end of this month. Some charge admission prices while others are free and/or request a donation. During this critical period, these cultural institutions need audience backing. If at all possible support them financially so they can return in full force, hopefully by Fall 2021.

For the San Francisco Ballet, The Nutcracker has been a monetary lifeline even in successful seasons. In this financially devastating time, the company will present an online Nutcracker and interactive journey. This visually stunning 2004 production, choreographed by former artistic director Helgi Tomasson, was the most expensive ballet ever mounted by the company. It was set during the time of the 1915 Panama Pacific International Exposition here in San Francisco.

The scenic design is exquisite. Recorded in High Definition video and true surround sound, it was filmed and released on DVD in 2008, still available today. If you haven't seen this version, it is one for the ages and worth the steep $49 ticket. Even if you're familiar with this adaptation, the admission price also includes in this virtual Opera House, a photo booth where Nutcracker-themed images can be downloaded, an opportunity to learn some of the ballet's choreography, a special Nutcracker-themed podcast, a history video, and a chance to browse items in the SF Ballet Shop. Viewers can also enter the virtual backstage area for a peek at Victorian houses shrouded in snow. www.sfballet.org 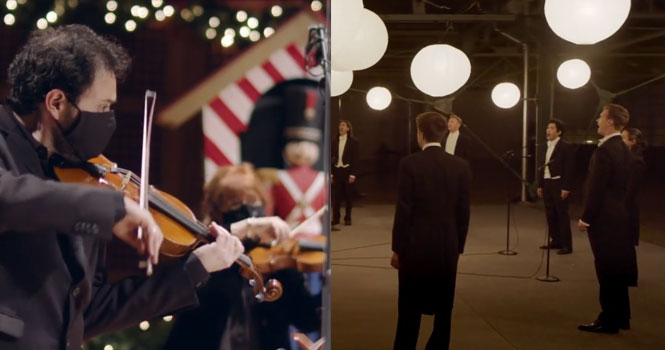 San Francisco Symphony's annual family-friendly 40th anniversary Deck the Hall Holiday Concert, a half hour of seasonal favorites, includes a reading of the "Twas the Night Before Christmas" poem with symphonic accompaniment as well as an audience sing-along. Free/donations. 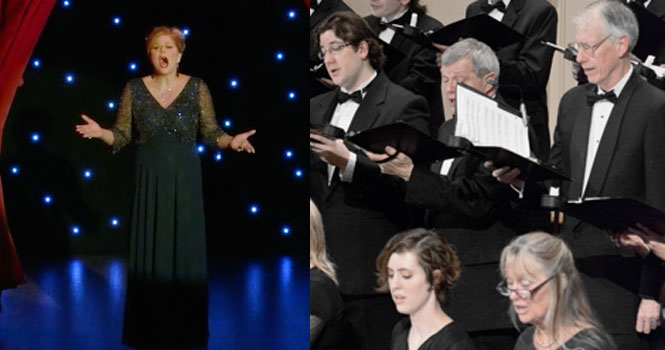 San Francisco Bach Choir, an 85-year-old auditioned volunteer choir conducted by artistic director Magda Solomon, originally specialized in Bach and other Northern European classical composers. Their beloved candlelight Christmas concerts at Calvary Presbyterian Church, this year entitled Comfort and Joy: A Homemade Holiday: From Our Homes to Yours, will be live-streamed with guests including Velocity Handbell Ensemble and The Whole Noyse Renaissance Wind Band among others.

Traditional carols (including their popular inimitable interpretation of the "Boar Head's Carol" and a few other sing-alongs) as well as the world premiere of "Mendocino Coast, September 2020" ("an elegy for a difficult year"), written for SFBC by Oakland composer Ted Allen, will be presented and includes interviews with composers and guest artists. www.sfbach.org 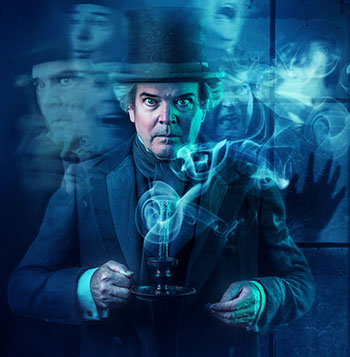 By all means relish Cal Performance's A Christmas Carol with its puppet wizardry. But for those who want a unique human rendering of this timeless classic, one cannot recommend highly enough a special 1.5 hour filmed one-man staged version by the gay director Michael Arden (Spring Awakening). This version stars actor Jefferson Mays, best known to LGBTQ audiences for his Tony Award-winning performance in I Am My Own Wife as Charlotte von Mahlsdorf, the transgender woman who survived the Nazi and Communist regimes in East Berlin.

In Mays's emotionally stirring interpretation, he brings to vivid life over 50 roles in a virtuosic master class of acting that must be seen to be believed. Using adept vocal intonations, facial expressions, and physical gestures, Mays, a connoisseur of English caricature of all classes and genders, can quick change characters in ten seconds with their distinct personalities (even as narrator).

Dickens used to tour readings of his 1843 novella out loud with practiced gesticulations that mesmerized audiences. In his abridged but faithful to the text version, so does Mays, alone on stage the entire running time, with minimal props, wall animations/pictures, recorded sounds, and a spooky production design enveloped in shadows and special lighting effects to conjure convincingly the spiritual world of the haunting Christmas ghosts.

In a brilliant stroke, this magnum opus incorporates the melancholy Christmas music of the indie singer/songwriter and multi-instrumentalist Sufjan Stevens, nominated for an Oscar honoring his songs in the gay film Call Me By Your Name. At times dark and gloomy, Mays's interpretation restores Dicken's theme; how greed and selfishness destroy society and the need to help the poor. This is useful advice for these economically devastated pandemic times. This not-to-be-missed adaptation is a riveting hammy-free tour de force, absolutely worth the hefty $50 ticket price. www.achristmascarollive.com 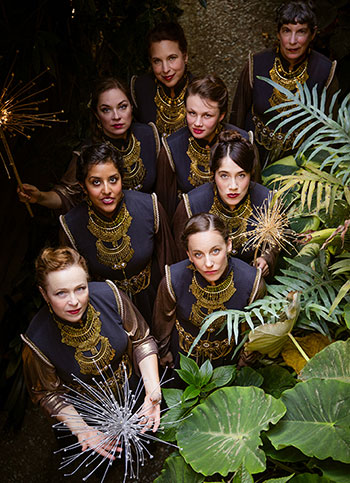 Two other live-streamed events are the choral group Kitka's Wintersongs, seasonal music from a wide variety of Eastern European ethnic and spiritual traditions and secondly, the local Irish vocal band Golden Bough performing rare versions of Celtic Songs of Winter and their unique take on popular Christmas carols. Free on their YouTube channel with links for donations. www.oldfirstconcerts.org 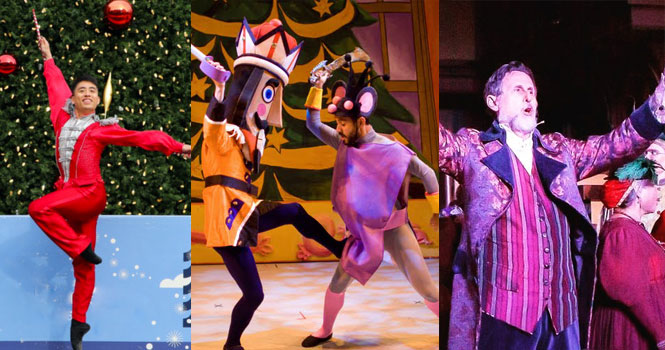 SF's Smuin Contemporary Ballet (since 1994) with its distinctly American style of merging classical ballet and contemporary dance, brings the wit and warmth of their yearly Christmas Ballet directly to viewer's homes. Each virtual showing includes new works and select holiday/non-holiday favorites filmed in their studio, followed by an hour-long recording depicting memorable dances from the past.

The streams rotate between three different programs (A, B, and C); the compilation recording that follows is the same for all performances. There are 15 virtual performances showcasing premieres by Amy Seiwert, Ben Needham-Wood, Rex Wheeler, and Company Artists, acclaimed for their innovative repertoire, inventive choreography, and uncommon physicality. www.smuinballet.org

Mark Foehringer Dance Project, based on his 80+ works for ballet, contemporary dance, and opera, now in its 25th season in San Francisco, is dedicated to a creative process involving collaboration with other local artists. They are noted for their annual outdoor dance festival in Golden Gate Park and sponsor a mentoring workshop for emerging young dance makers.

Foehringer's enchanting Nutcracker Sweets, designed for families with small children, encapsulated in 47 minutes on Vimeo, also includes numerous bonus features, such as meeting and chatting with the cast, viewing the costumes, learning the soldier dance, and encountering theater magic with the Sugar Plum Faerie, among others. www.mfdpsf.org

Another Bay Area touchstone, The Christmas Revels in Oakland, is celebrating its 35th annual show entitled Unruly Magic: A Spiritual Celebration of the Winter Solstice, using ancient traditions of bonfires, rituals, dances, and songs. A young Reveler turns to a magical staff to help her find a way through these somber Covid times.

For a local production, the special visual effects are skillfully and believably executed, blending older archival footage with newly filmed pieces. This folk wisdom has something to teach us about coping with the fear and uncertainty of the pandemic, but retains the joyful holiday enchantment without being preachy. The catchy music is vintage Renaissance fair/Celtic. The entertaining Unruly will appeal to children with its amateur but community-based infectious enthusiasm, including their quintessential offerings "The Abbot Bromleys Horn Dance" (filmed at Muir Woods) and a reading of "The Shortest Day," with guest artists Shira Kammen, Shay Black, the Windborne Singers, among others. www.californiarevels.org