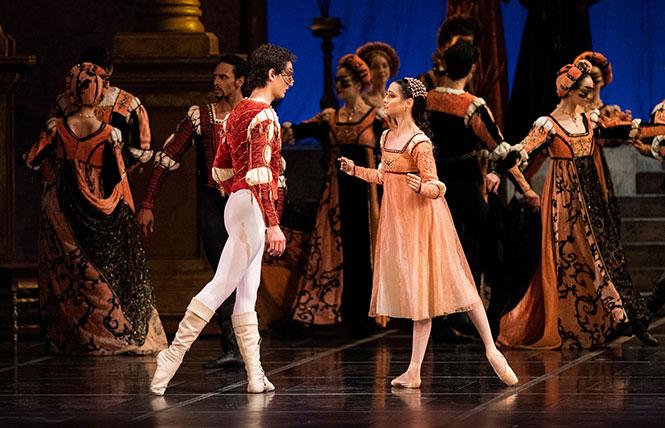 It's been two months since all the theaters closed, and it's been no longer possible to see a live dance performance unless you're dancing in your living room with other members of your domestic circle. Which was standard practice during the depression, when people turned on their radios and danced to the big band broadcasts coming from the Savoy Ballroom and the big hotels.

Once shelter-in-place began, streaming video of all kinds of dance began appearing online — very haphazard: everybody was doing it, but since nobody was organizing it, the windows popped up and snapped shut, half the time I only heard about it after it was too late. Urgent emails, you must watch — but if you did tune in, odds were you weren't in the mood for that.

It's wonderful to be able to report that San Francisco Ballet will be streaming for free Helgi Tomasson's Romeo and Juliet in two versions that have already opened online and will run for nearly a week: a single-camera capture by Rapt Productions, starring Mathilde Froustey and Carlo di Lanno, will run through Friday May 15 and a more elaborately filmed, multiple-cameras version in the Live from Lincoln Center series that was (made to be shown in cinemas. The latter stars our former principal dancers Maria Kochetkova and Davit Karapetyan and will run through next Monday, May 18, with the possibility of an extension. 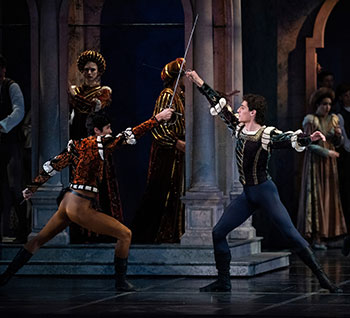 The production is magnificent: great live music by Sergei Prokofiev, for a huge orchestra including saxophone, mandolins, and mighty clouds of brass, skillfully conducted by Martin West (in the Kochetkova version) and Ming Luke (for Froustey and di Lanno); beautiful Renaissance scenery and costumes by Jens-Jacob Worsaae; fantastic sword-fighting choreographed by Martino Pistone, who joins the troupe to play the Duke of Verona; and Tomasson's extremely well-crafted dances, which tell the story in intricate detail and occasionally rise to the level of genius, in the ballroom dances, which work out like chess-games to bring Romeo and Juliet to meet cute in the midst of elaborately geometrical quadrilles.

The dances pit the lovers against powerful social forces so that we see what they're up against, and we see them triumph even in their deaths, and we believe they were right. This is tragic as the ancients understood it. The spectacle gives us a vision of the deepest conflicts in our society, and a clear sense of which side we should be on.

The camera loves Froustey; her acting is unforced, her dancing floats on the music in a way that actually seems emotionally real. She's got astounding aplomb, and will take a step, and hover till the music says 'Now!' Her movement is like the play of thought. And since there's rarely been a more intelligent heroine than Juliet, it's as if we can see her emotions and her thoughts.

The interpretations are equally valid. If I prefer Froustey's, Kochetkova's dancing is breathtaking, and there are moments where her silhouette in arabesque are etched on my mind forever. And both casts are strong, all down the line.

Pascal Molat and Gennadi Nedvigiin alternate as Mercutio — outstanding, each of them; Joseph Walsh is wonderful as Benvolio in both casts. Luke Ingham is ferocious as Tybalt.

Karapetyan and Kochetkova are very well-matched, and play it with Soviet-style idealism and strength; Froustey and di Lanno are more tender lovers, full of life but crushed by the forces of the old regime.

Each pair represents values we need to see embodied in this time of rumors, political skullduggery, graft, disinformation, to remember when we come out the other side what we're gong to need to fight for or else it will be swept away.

And one of those things that is most in danger is the institutional support for the arts.
When Pol Pot attacked the classical dance tradition of Cambodia, he nearly wiped it out; only a few teachers survived. We won't face such a direct attack on our artists, but chaos and indifference can do almost as much damage.

More Moves
Of course, the ballet is not the only dance troupe here; in fact, the Bay Area has the finest dance community in the country outside New York. Two months ago, I could not have seen every dance performance I'd want to even if I had the time.

Contemporary dance, ethnic dance from all over the world, with major schools here and great performance troupes. Here are a few listings for contemporary dance that will run this week and afterward.

Recent dance writing by Sima Belmar is featured on the ODC site, about a number of issues, including free [or pay what you can] dance classes taught via zoom: medium.com/odc-dance-stories

A tiny example of the marvelous little dances that used to surround us in a busy urban life: from the Rotunda Dance Series (which used to run at noon at City Hall), a charming duet by the Ballet Folklorico Costa de Oro.

Be on the lookout for the Shut-in Dance Film Festival, coming in June; deadline for proposals is this Friday, May 15
dancersgroup.org