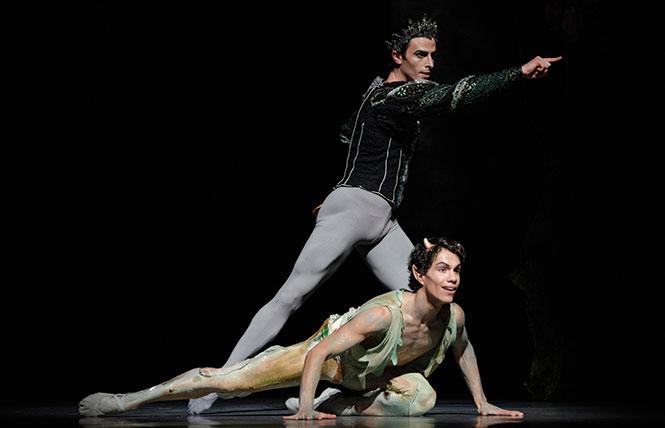 San Francisco Ballet had a triumph last Friday night. It was the best dancing, the best of everything so far this year, new pleasures of many kinds, in their stellar production of Balanchine's "A Midsummer Night's Dream" (1962).

It was magical. The 3,000 of us who blissed out on this did not know until we got home that it may have been the only one performed. I shall be telling this with a sigh, somewhere ages and ages hence: I saw Joe Walsh dance Oberon in 2020, and all those wonderful children. We got home to find the news that the Opera House has closed for two weeks. We don't know yet if the rest of the run can be rescheduled. More of what's lost below.

But first, all praise to everyone involved: this ballet deserves revival, Balanchine's first to unite pure dancing with gestures that work in counterpoint to create mood, suspense, longing, and also set gestures in a separate line of phrasing that answer necessary questions of the plot at a sudden stroke. The story emerges as in an epistolary novel, maybe one sent in emails or tweets.

So it was worth doing, if only to give the dancers chances to work this way, and they excelled, for which much credit goes to by Sandra Jennings, who set this revival, new to SFB in 1985 and not seen here since, with wit and style (with extra coaching by SFB artistic director Helgi Tomasson, who has danced Oberon in his time). The dancers have never been more ready for anything, and so was the orchestra, who made gossamer textures out of the fairy's whirring, fleeting tones, under Martin West's direction. The late Martin Pakledinaz (costumes and set) and Randall G.Chiarelli (lighting) gave fantastic, shimmering plausibility to the lovers' wanderings in the forest, and the magical realm of the fairies. 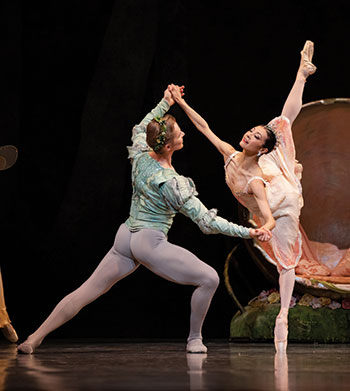 Opening-night casting was all-star: Walsh as Oberon, Yuan Yuan Tan as Titania, Esteban Hernandez as Puck, Dores André as Hermia, Benjamin Freemantle as Lysander, Jennifer Stahl as Hippolyta, Luke Ingham as Duke Theseus, Tiit Helimets as Titania's cavalier, soloist Wona Park as the lead fairy. Alexandre Cagnat, corps de ballet, had a quiet triumph as Bottom, the "rude mechanical" whom Puck transfigures with an ass' head, who danced the saddest, sweetest, most mysteriously cross-specific pas de deux (as when vampires marry werewolves) with the infatuated Titania, whom, as you doubtless know, Oberon has had bewitched with the juice of a magic flower, "Love lies bleeding." She caresses him, he scratches his knee, he supports her the whole while as she lifts her leg high in ecstasy, he looks behind him at the tuft of grass he wants to eat — he is responsible for her freedom to gesture as huge as she wants, but he's not really interested — yet never interrupts the flow of her passion. It will not be Bottom who brings this house of cards down in a crash; he has too sweet a heart.

The second act is conventional, well-crafted, but, aside from the glorious pas de deux, danced tenderly by Misa Kuranaga and Angelo Greco, there's not much to see if you're sitting on the orchestra floor. Those upstairs see a much more interesting show of emerging and dissolving patterns that fit the music like a glove.

What we've lost is not just the chance to see this ballet again, but also the chance to see untried dancers get their chances in these great roles. Casting for the full run had been posted (https://www.sfballet.org/tickets/casting/.) It's a dazzling spectacle of opportunities. Dancers develop their artistry onstage, doing what it takes to add to their technique secrets of their own that will put these roles over. We've lost the chance to see them make their mark. I know people, more than I can count on two hands, who'd eat beans for a month to get a chance to see Sasha Mukhamedov dance Titania, or the great, neglected Sarah Van Patten dance. Lonnie Weeks was to have danced Puck Saturday afternoon!