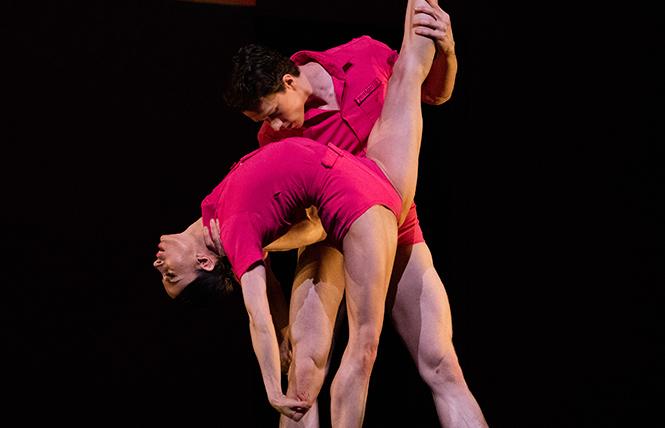 San Francisco Ballet was back in the Opera House for a two-week run continuing through Sunday, with a pair of great mixed bills. Each was like a three-course meal, each piece a world unto itself, but linked like islands in an archipelago.

The highlight of Program 3, in which everything was well-danced, was the world premiere of a Blade-Runner-ish 'moving picture." "The Big Hunger"(choreographer Trey McIntyre) is set in (maybe) the remains of a garment factory half-destroyed in an earthquake, with droids in pink-tinsel Anna Wintour wigs policing a world where a few people (Benjamin Freemantle and Dores Andre) want more tenderness and spiritual connection. But they're in hot-pink hot pants and the same wigs, so they must be a little bit Zara-enslaved as well. Set to Serge Prokofiev's colossal Piano Concerto No. 2 (described as "a dragon eating its young" by one of the few pianists who can play it), "The Big Hunger" is a synesthetic onslaught where all your senses are attacked at once. You don't know what hit you. Me, I want to go back, see if I can parse it. But the head-rush is like dropping acid, and there's a case to make for not interpreting it. The virtuoso pianist Yekwon Sunwoo got the biggest hand of the evening.

If you like your pleasures rational, the show to see is Program 2 (frankly, I think you should see both), where the highlight is the revival of Mark Morris' brilliant "Sandpaper Ballet" (1999, last revived 2009), a festival of dances to little toy symphonies by Leroy Anderson, whose records went gold back at mid-century. You are bound to know some of them already ("Sleighride," "Syncopated Clock"), and if you don't know them by name you might recognize half of them if you heard them.

It's silky orchestral music with the repeated delightful shock of recognition of sounds from ordinary life — the sounds of a typewriter, the clip-clop of horses' hooves, a whinny, bells ringing — that Anderson works into his catchy tunes with high-level skills, like Haydn's in his "Toy Symphony." Morris extends this extravagantly so an idea in the music shows up in the moves, or in the overall picture.

So the pleasure is Bugs Bunny-ish, and a compliment to your intelligence. At first you just sit up and notice how patterns take shape — a dancer from the back corner runs around the group and jumps into place right on the music. Morris echoes Anderson's wit without getting stupidly literal-minded. It's everything you ever liked about a Looney Tune. A bright child would love this; the hard part would be that they wouldn't want to go home, they'd want to see it again right away.

Though it's "just" a casual divertissement, it's one of the greatest ballets in their rep. The soloist Max Cauthorn was dancing so blissed out, his light shone brighter than anyone else onstage. But other stars were Jahna Frantziskonis, Esteban Hernandez (awesome!), Steven Morse (who made a big jump stolen from "Giselle" look like a kid on a skateboard), Miranda Silveira, and in the pas de deux, a dance of affection not passion, Sarah Van Patten and Luke Ingham showed a completely contemporary couple trying to get comfortable and fall asleep, in the nicest possible way, as they maneuvered for space in a too-narrow bed.

In an hors d'oeuvre of a pas de deux, "Soiree Musicale," Misa Kuranaga stopped our hearts when, at top speed, she stopped a fast pirouette dead, still on pointe, facing the back corner, then opened to a new position with the bent leg behind her — and then melted out of that at top speed and repeated the combination exactly. If you could not believe you saw what you had in fact just seen, she shows it again, exactly the same, just as unbelievable.

This company can do nearly anything. I've listed the things I liked best, but in a variety show like these mixed bills, you may find something that catches your heart that did not reach me. On a different night myself, I might have responded differently. But there will be something there, you'll see something that will stay with you for the rest of your life. And you may want to treasure it in your heart and never tell a soul, it can mean so much to you.