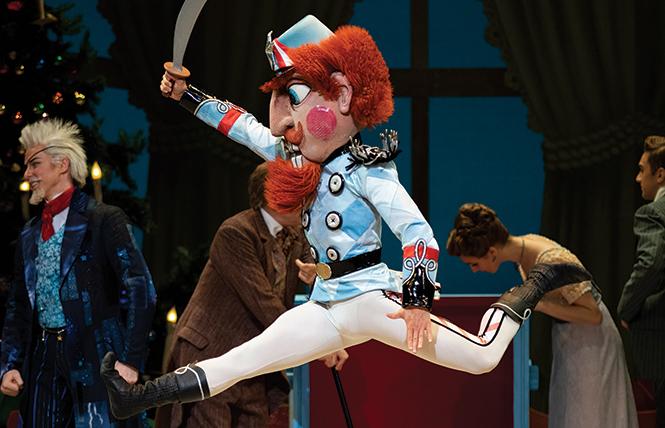 The "Nutcracker" may have passed its peak in its grip on American culture. Globalization has caught up with us, and the sensitivities of young people who belong to ethnic groups they see as stereotyped in the ballet must be allowed for. Are my people being dissed? is a question that's in the air, and it is impossible to argue with people who've been offended. Even if it was only 15 years ago seen as a "progressive" vision of all nationalities living in harmony, it has for some now become one where ethnic groups see themselves caricatured in the ballet. We'll have to wait and see how it sorts out.

But you'd never guess that from the fantastic reception the ballet got at its opening night last Wednesday in the Opera House, which was packed to the gills. The first act got a near-standing ovation as the curtain slowly fell on the Snow Queen (Yuan Yuan Tan) pirouetting amidst the snow-swirling stage in the arms of her dazzling cavalier (Carlo Di Lanno). When we all came to our senses, it was clear from the thunderous applause: there were few of us who did not feel what we'd just seen was extraordinary.

We'd all been primed for this. There were symposia on the ballet and receptions for former dancers who'd played Clara, the child heroine, over the 75 years since San Francisco Ballet's "Nutcracker" premiered in 1944 as the first complete production of the ballet in the U.S, on Christmas eve in 1944, not long after this country had entered WWII, when the "Battle of the Bulge" was wavering back and forth, and the Nazis seemed likely to win. If we're in impeachment fever now, the emotional climate then was pretty similar, and "Nutcracker" was launched as a sovereign remedy for holiday anxieties and a wonderful inducement to explore the supermarkets and stores and find exactly the right present. Certainly last Wednesday, Clara's defeat of the Mouse King resonated for me with a hoped-for victory of Pelosi over Trump. 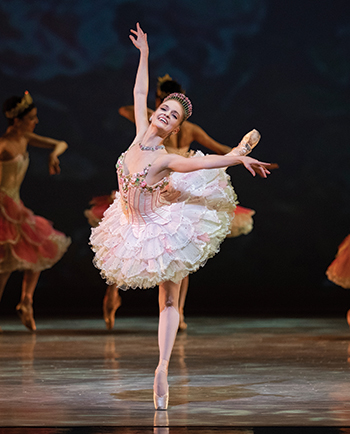 Long before the first complete Nutcracker ballet took to the stage, Tchaikovsky's music for the "Nutcracker Suite" was at the top of the bestseller list. The music is probably the secret of the ballet's popularity, in all its versions, including the recital versions presented in smaller venues all over. Indeed, if your niece is performing, or the child of a friend, you should go see their show, since watching young people dance is one of life's greatest pleasures, and even if they can't do everything perfectly, watching them do their best is very satisfying. The music is inspiring. As Dmitri Shostakovich said, "Without Tchaikovsky, we could not endure our sorrows."

Over the decades, "Nutcracker" has conquered the nation, and is an institution here greater even than in Russia, where the first production was planned by the great choreographer Marius Petipa, who set out its numbers and collaborated with Tchaikovsky down to the tiniest details of rhythms, textures, and number of bars of music.

The story is as engaging as that of Dickens' "A Christmas Carol," built on the relationship between a rich, childless, older man and a child who is at a crossroads in life. Tiny Tim (in Dickens) is dying, and Scrooge gives the money that saves his life; Clara's godfather is rich in a different way: he is rich in lore, he knows how things tick. The difference is that "Christmas Carol" is Scrooge's story, it is his inner transformation that we experience. In "Nutcracker" we follow Clara's hopes and fears, her inner journey. In her dream, when the world grows huge and she's tiny like Alice in Wonderland, and she conquers her fears and fights the Mouse King with the help of her nutcracker, it's her triumph we share.

Our Clara, the child dancer Abby Cannon, had the superlative help of Tiit Helimets as her Uncle Drosselmeyer. A great mime and a performer of leading roles, Helimets led us through the first act with panache. His magical powers, when he rises amidst smoke through the floor in her dreams and causes the tree to grow to gigantic size, and all the furniture to move around the stage and grow to colossal proportions, actually seems like the result of the power of his gestures, such a spell he casts.

I wish the other performers had wielded such theatrical gifts. Everyone in the first act was good enough, many were wonderful. Madison Keesler as Clara's mother, Jim Sohm as her Grandfather, Miles Thatcher and Kimberly Marie Olivier as party guests, Lauren Parrott as the ballerina doll were first-rate, and projected marvelous characters.

In the second act, things went slowly downhill. Max Cauthorn and all the Spaniards were great, and Lonnie Weeks was fantastic as the Peking Opera-style acrobat, pursued by five young dancers pretending to be a dragon in good Chinese New Year style. Maggie Weirich, Ami Yuki, and Kamryn Baldwin were delightful and very French as the Marzipan can-can dancers. The Russian dancers were simply off-the-charts wonderful, led by Esteban Hernandez in the trepak choreographed long ago by Anatole Vilzak, one of the great teachers at the SFB school, who escaped Russia in the early days and is memorialized for us in this dance. Miranda Silveira was wonderful as the Arabian genie who comes out of the lamp.

But Sasha De Sola danced very carefully as the Sugar Plum Fairy. Perhaps the stage was slippery? The dancers of the Grand Pas, which should have crowned the evening, had a number of slip-ups, though they maintained their composure and kept the action going bravely to the end. Grace under pressure is one of the hallmarks of great dancers. Even on a bad night, Mathilde Froustey and Luke Ingham gave of their best, and behaved with the best possible grace.

The audience called the dancers back enthusiastically, and curtain calls were warm and heartfelt. When Helgi Tomasson, who has led the company for decades now, came out for his bow, the applause was very grand. Then balloons began to fall from the sky. We all kicked them around, many fell to exploding them, and I could not blame them. It had been a grand evening.