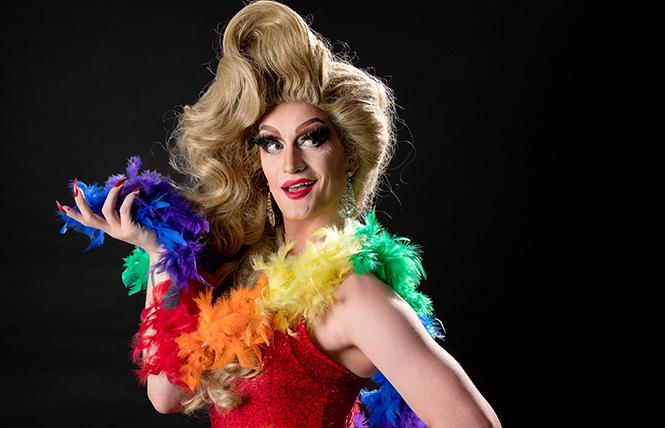 The dust has not quite settled (literally) at Smuin Contemporary Ballet's new headquarters on Potrero Hill yet, but the company moved into the light-filled studios as soon as the electricity was turned on in October, to begin preparations for their annual run of "The Christmas Ballet." The electricity in the building isn't just coming from new PG&E wiring. There's a palpable spark in the air. A sense of joy and gratitude emanates from the staff and dancers, who radiate with positive energy even at the end of a long day of rehearsals.

On this day in mid-November, the level of giddiness is even higher. A special guest is in the studio, and she's not wearing pointe shoes. She's going through the paces of a rigorous ballet while wearing a dazzling pair of silver sky-high pumps. Former Smuin company dancer Rex Wheeler, a.k.a. Lady Camden, is here to rehearse the lead role in "Santa Baby," a work created by late company founder Michael Smuin that will be the centerpiece of "The Christmas Ballet" LGBTQ+ Night on Thurs., Dec. 19.

Artistic Director Celia Fushille works through the steps with Wheeler, pointing out the nuances of a role she has danced hundreds of times, always referring to Rex as his alter-ego. "Okay, Lady Camden, go into passé here, then turn out and place your foot here, get some momentum with the chassé before going into the lift." She watches intently, makes corrections, then asks, "Well, Lady Camden, you ready for a full run?" Wheeler looks hesitant at first. But as his fellow dancers cheer him on, his eyes light up, the glistening pumps are lifted high into the air, and a new chapter of Smuin Ballet history begins. 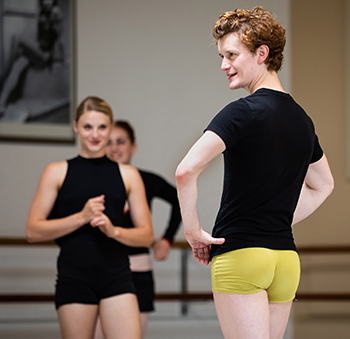 Fushille says, "I'd seen videos of Lady Camden, and I thought that as a trained dancer, she could really do the 'Santa Baby' choreography and do it justice." Fushille had been thinking about an LGBTQ+ night for some time, but she didn't want to just throw a party — although there will be a celebration after the performance, hosted by Lady Camden and the Imperial Council of San Francisco.

According to Fushille, "We decided as a team that we would plan for a year and really make it special. In addition to 'Santa Baby,' Lady Camden is choreographing a new work, and she'll make other cameo appearances. Some of our other choreography that is normally heterosexual couples, we're going to mix it up and have two guys or two girls."

For Wheeler, bringing his Lady Camden drag persona into the ballet world has been a somewhat cautious journey. He says, "In my last year or two dancing with the company I had some back injuries. I was really not able to do much for large chunks of time. I started experimenting with drag and makeup, and it made me feel like a kid again. It really helped lift me out of that 'injury funk.' Drag was a way to connect my love of being the class clown in the studio with my creativity." Lady Camden now makes appearances at clubs around the Castro and at Oasis, and as a hostess/performer at Hamburger Mary's.

Simultaneously, Wheeler's work as a choreographer began to blossom. "I'd been doing drag and choreographing for the company, and I always kept them separate. Not everyone in the ballet world is interested in drag. But Celia is such an open-minded person, she really cares about her dancers, even when they move on. She follows me on social media, and she'd ask me about my shows. She wanted to do an LGBTQ+ night, and she felt I was the right person to connect these two different worlds.

"I'm so happy that the staff and dancers are invested in making LGBTQ+ night happen. Everyone has a great sense of humor, but they take their jobs seriously. As much fun as I'm having, I want to get the steps exactly right and respect Michael's choreography. And I want to make sure we still make our regular Smuin audience happy with all their favorite classics. We're just going to intersperse it with a little drag and the LGBTQ spirit."

As he looks around the new studios, Wheeler's thoughts turn back to Fushille and the company's late founder. Wheeler says, "What Celia has done here is so amazing. When you meet her, you see that she is smart and knows how to make things happen, but what I realize now is that she's really ambitious. I think that's what Michael would be most happy about. He would want the company to grow, do new things and make brave choices."