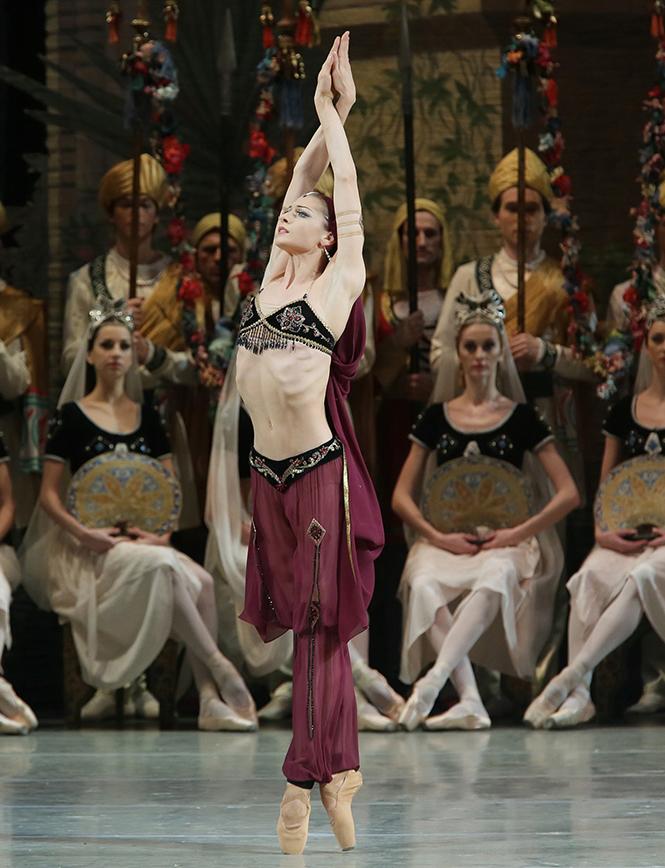 They were ready. Nothing short of a fire that could engulf Berkeley would have kept Cal Performances from presenting the Russian ballet "La Bayadere" in Zellerbach Hall last week. The Mariinsky Ballet of St. Petersburg opened last Wednesday night to a packed house, with a sure back-up of electricity and many VIPs in the house. They had brought 200 personnel with them, orchestra and dancers. It was a colossal production. First-night was a little iffy; everyone was still getting their bearings. House lights came up unexpectedly. The ballerina Ekaterina Kondaurova (Nikia) and her partner Andrei Yermakov (Solor) had little chemistry, while the seconda donna (Yekaterina Chebykina, as Gamzatti) could not decide when to finish her pirouettes. But by the finale, Kondaurova was at full-blaze ballerina, and Yermakov staggeringly brilliant in his first solo. With the stunningly clear dancing by the corps, they put the show over the top. By Thursday, the engine was firing on all cylinders, and the whole show went like gangbusters.

It's a story, set in India, of a temple dancer (the bayadere), dedicated to the divinity, who falls sincerely and forever in love with a young warrior, who swears undying love to her but is forced by the Rajah to marry the princess, his daughter. In the full version, the gods punish the Rajah and reunite the true lovers; for reasons too complex to recount, that last act, with the collapsing temple, the staircase to Nirvana, the apotheosis of the young lovers, was not presented here. The ballet doesn't need the finale, since the last act is so staggeringly impressive in showing their true love we can get by without seeing the comeuppance staged. But other variants of the ballet exist with a restored last act, one recently shown in Berlin.

One test of a classic is this: Can it deliver something of great importance, even when truncated, from generation to generation? Even more important, can it make the next generation understand how their parents or grandparents thought and felt about the issues that concern them most? And can it be that a ballet which uses no words at all can handle human issues, and issues at their most abstract? 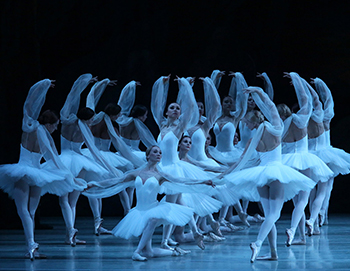 Maria Khoreva, the 19-year-old ballerina who starred in Thursday night's production, handily demonstrated how to make it clear that a sexual advance is not wanted. Long before she had to push the High Brahman away, stamp her foot, and hold her hand up in the universal gesture of "Stop right there!," her whole body had been saying "No" for five minutes. Every cell in her body was shrinking back and away from him before she started stepping backwards away from him. First the breast-bone pulled back, then the chin, the navel pulled to the spine, the lower ribs pulled in. All of this is visible, since her costume bares the midriff from the pecs to the hips. She's an Indian temple-dancer, after all, and the goods are very much on display. The High Brahman is writhing in torments of desire he is trying to suppress; he's knows he's wrong but can't stop himself.

By contrast, every breath she takes is open and large when, alone at last, she's facing Solor (Vladimir Shklyarov), the matinee-idol-handsome premier danseur playing the Warrior prince, who loves her. The openness of his heart to her was visible at his entrance, when he ran across the stage looking for — we did not yet know whom, but he ran like the wind, which tells you everything about the spirit that moves him: "So light a step will ne'er wear out the everlasting flint." This ballet is about the opposition of lust and love, and about a woman's right to choose, and of a man's, as well. This is established from his entrance and confirmed by hers, and it's a truth that can never be enough confirmed, It's tested throughout the course of the ballet again and again.

The power of his remorse is demonstrated in extenso, after many twists and turns, in the climax of the ballet (Act III), where an eight-bar phrase of Nikiya's pleading solo gets heightened, stylized, and repeated in a hallucinatory vision, over and over by 32 dancers, a chorus of grieving spirits who enter one after another, repeating the same phrase in a procession of ghosts that gradually fills the stage with glowing white forms.

The Soviets embraced ballet. Under Agrippina Vaganova, the technique was magnified and made more heroic, to appeal to the popular audience, which made it not just OK for the Politburo, but also the leading edge of Soviet propaganda. Russian Ballet was so popular in the Third World that the U.S. mounted a cultural counterattack, sending American dance companies like New York City Ballet. All the names that are big now were made that way by State Department funding. In the 60s, when Russian dancers "leapt to freedom" by defecting to the U.S., it was bombshell headlines, a huge propaganda coup for the USA. When they got here, the first thing Russian dancers wanted to share with American audiences was "La Bayadere," excerpting the minimalist "Kingdom of the Shades" scene. It stunned critics and public. The minimalist artists of New York claimed it as minimalism before its time.

The show we saw is essentially the 1947 production, a Romeo-and-Juliet-esque melodrama where true lovers are pulled apart by the law. It's tuned to the tastes of Stalin, with groveling slaves, spectacular acrobatics (jumps for the guys, overhead lifts for the ballerinas) including a bravura dance for a bronze idol wearing a loincloth and head-to-toe gold make-up that stops the show completely. The fakirs who dance around the fire in the first act, despite their grey wigs, are nearly naked and have the bodies of 18-year-olds. They contort their bodies like shrimps when they leap. "Decorous lust" abounds: bare midriffs on anybody whose navel you might want to see.

What waistlines these dancers have! Poshlust! Male and female, tanned with body makeup or white like marble, there's "not an inch of fat," except on the Rajah. With stylized folk dances, in the style Moiseyev perfected, this would not be too refined to play Vegas.