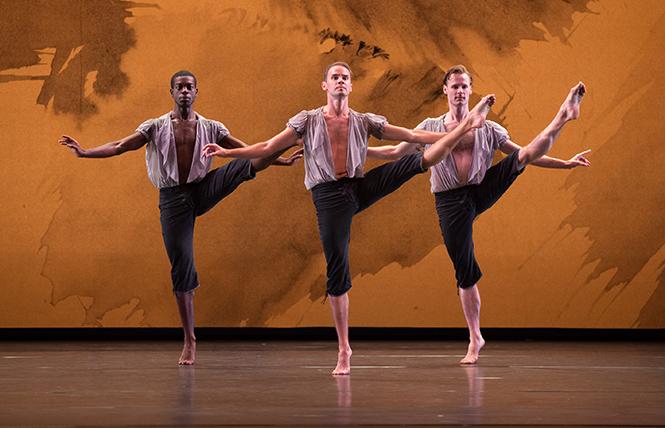 Several football games had gone by already before Cal Performances, the great Arts & Lectures series of U.C. Berkeley, finally kicked off its season of major international performing arts last Friday night in Zellerbach Hall with a brilliant revival of Mark Morris' "Mozart Dances." I am glad to see it again. Morris is at the moment the last of the great musical choreographers.

He has always been about the music. As a child he started with Flamenco, then had a hippie phase as a member and choreographer of a Balkan folk-dance collective. He came to "serious concert dance" up from the roots of the dances of the people, which are always rooted in the music they're danced to, and the rhythms and harmonies that belong to them. So the moods, rhythms, melodies, harmonies of the music have always shone through his most complex structures to give his work popular appeal. And his taste in music is excellent.

But "Mozart Dances" is a hard nut to crack. The relation of the movement to the music is not straightforward. I found it easier to grasp this time, since they downplayed the music and elevated the dancing. At its premiere here a decade ago, the star was the great pianist Garrick Olson, who played Mozart's parts in all three selections: the 11th and 27th piano concertos, separated by the Sonata for Two Pianos.

This time around it was better danced throughout, with better balances, clearer phrasing, and with a sovereign performance by Lauren Grant in the opening piece "Eleven," which is necessary to lead you into the work. It's been her role since the beginning, and her authority has grown stronger. The theme seems to be, in E.M Forster's phrase, "Only connect!" As she enters a grove of women, they are fixed like columns on a temple-front. They gradually become less inert as she approaches, then darts away. Every move she makes is suddenly arrested, with heart-stopping balances on the brink of some abyss. A number of times, she falls. 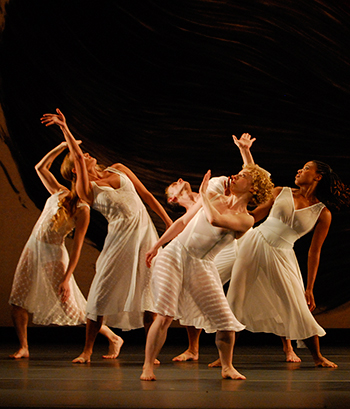 One moment the pose is noble, could have come off a Grecian urn. The next minute she's flat-footed, facing upstage, with her elbows beside her ears and both hands on the back of her neck. She's stumped in a variety of moods, but she persists. The women onstage will sometimes fall into line and follow her, or suddenly veer off as if repelled. The forces seem "animal-magnetic," but gradually they look more life-like. Finally, two women take hands, and it's catching. Still, the final image is a woman fallen to the floor, reaching out with a clamorous gesture that is held as the lights go down.

The second movement is the heart of the matter: the double piano sonata, a dance for the men with the finest circle dance perhaps ever created at its center, It opened up with every device a dance-maker could devise to create a sense of community: its gravitational forces, those that hold it together and those that might pull it apart. Morris has stolen from Balanchine's "Concerto Barocco, Divertimento # 15," though the motifs both choreographers use come from folk-dance, where the bigger dancers lift the little ones, or make arches, "thread the needle" and pull a line of dancers after them.

It takes a hell of a choreographer to make anything appealing with music as tightly organized as this. A suite of dances lends itself to dance-making; so does a bunch of songs. Social dancers can improvise all night long to a playlist of songs. But sonata structure is musical argument. Balanchine showed how to do this with "Serenade"; Massine showed how to make a huge, klugey mess with his attempts. Here Morris has programmed the three pieces together. He has mastery of spacing, the change of mood that a sudden entrance can make, and above all the ability to set the group moving in complex ways: in canon, in opposition, weaving through each other, falling suddenly, separately or in groups, with at all times well-chosen steps that fit the music so skillfully it's as natural as water running over rocks. The heart of the matter is intimacy. Mozart can lead you round the corner by indirect means, and suddenly you feel a big emotion. Morris can lead you there with the same sense of revelation.

There are several star turns. Though the piece is about community, there are two other major roles. Aaron Loux excelled in the commanding role that opened "Double," a petit allegro virtuosic role with stunning pirouettes, turning on a dime and finishing in a pose of noble command, alternating with brilliant running steps, lacy footwork of the frothiest kind. This entrance, applauded wildly, prepared the way for the jeun premier Noah Vinson, the most delicate, gentle of the men. Vinson became the center of the six-man circle when it was most embracing. When the music turned ominous and the stage was invaded by implacable creatures who threatened Vinson with imprisoning energy, it was Loux who circled the group, arms outstretched, without being able to pierce it. But the threat melted away. And the finale is a picture of civilization, ending in a frolic.