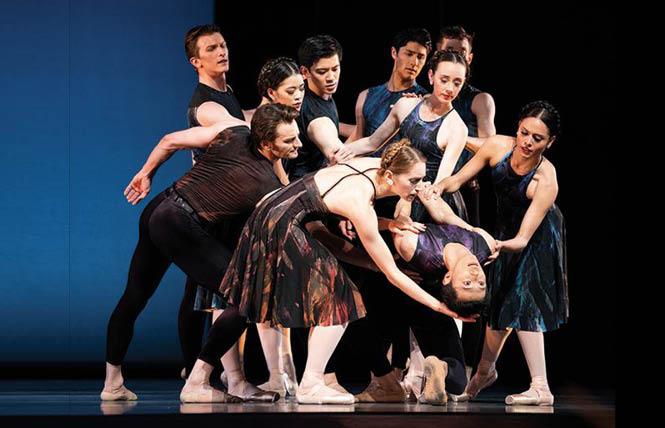 When the glorious dancers of San Francisco Ballet, the pride of our city, ended their season at the Opera House with a brilliant run of "Shostakovich Trilogy," a three-act abstract ballet by the former director of the Bolshoi Ballet, Alexei Ratmansky, they presented a political spectacle of almost imponderable depth. The piece would repay attention if you'd seen every show in the run, which ended on Mother's Day. It's worth remembering it was Nureyev's mother whom the Soviets threatened when they wanted to torment the great defector who "leaped to freedom" in 1961 and first made celebrities out of ballet dancers in this country. Nureyev was as big as Mick Jagger, and he is still news: the Nureyev bio-pic "White Crow," directed by Ralph Fiennes, has just come out, and a ballet about Nureyev choreographed by SFB's own Yuri Possokhov made headlines in Moscow this year amidst huge controversy. 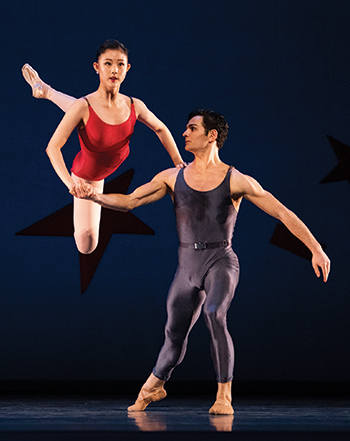 No question, "Shostakovitch Trilogy" is a work of monumental importance. It's a very strange work, a black comedy in the two outer movements, and a poignant dance of infinite sadness in the central movement. There would not be room to plumb the burden of meaning here, even if there were not a rough mix of American and Russian idioms: Soviet ballet was the official idiom, Bolshoi rhetoric is bombastic and huge, and for Ratmansky to try to compose like Balanchine or Robbins in an idiom that belongs to the democratic American world cannot be expected.

The whole evening is a dark comedy, three symphonic works by the superstar Soviet composer set as pure-dance ballets on the model of Balanchine's "Jewels," with the most poignant one, "Chamber Symphony," in the center, following sonata form.

So the evening shapes up as a brilliant black comedy that reflects Soviet life. If you were going to live, this was what you faced. The opening "Symphony #9" features the smiler with a knife beneath his cloak (Esteban Hernandez) and the opaque cheer of a secretary who's betraying you to the party bosses (Sasha de Sola), who enters on a bright note and immediately starts to pogo on pointe, brilliantly, and somehow it seems like this is the thing to do. Everyone looks fabulous, since this is a ballet, in black velvet tights with gleaming metallic belts, with stunning moves and sleek segues, and moments of private misery when the protagonists (Mathilde Froustey, Luke Ingham) don't know whom they can trust and sneak sideways offstage when they get the chance. The ray of hope is embodied as an insight into whom you can trust, danced to the hilt by Hansuke Yamamoto. You just have to accept it, he's like the Lone Ranger.

Choreographer Ratmansky admits that he had to get his family out. He doesn't say much to reporters, but when you remember that his successor Sergei Filin had acid thrown in his face, that both of them supported free expression in the arts, and used the ballets they commissioned to expose the crimes of Stalin, you'll realize that this is not a shallow commitment.

The epicenter of the evening, Shostakovitch himself, is Aaron Robison, a beautiful dancer barechested in a dinner jacket, with a wingspan extending from the breastbone to reveal greatness of heart: the pecs, the shoulders and arms of this dancer are the pre-requisite for opening the power of his courage and the depths of his misery. The music is an expansion of the String Quartet #8, which many think was a kind of suicide note. He finds happiness with the three women in his life (danced by Jahna Frantziskonis, Dores Andre, and Jennifer Stahl), each poignant in their way, but often he collapses with his hands wrapped round his head. At the end he's on the floor while the corps de ballet strike a pose of exaltation that embodies the hopes and aspirations of his imagination, the only monument he can leave behind.

The finale is a brilliant comedy set to Shostakovitch's early Piano Concerto #1 with trumpet. Ratmansky's deployment of the corps is most powerful as they mass like statues in a public park, or pile up into images that suggest anti-missile gear mounted on tanks parading on May Day. There is a beautiful double pas de deux, very poignant, to the almost-Elgar-like enriched melancholy harmonies of the adagio. The principals in the double pas de deux were Yuan Yuan Tan, dancing with Tiit Helimets, and Isabella deVivo with Vitor Luiz.

It's hard to read the tone of the finale, when the male and female roles are reversed: women supporting men. The very last image has the guys caught in beautiful attitudes, held in place by the ladies in the red leotards. I've chosen to think it's hopeful.