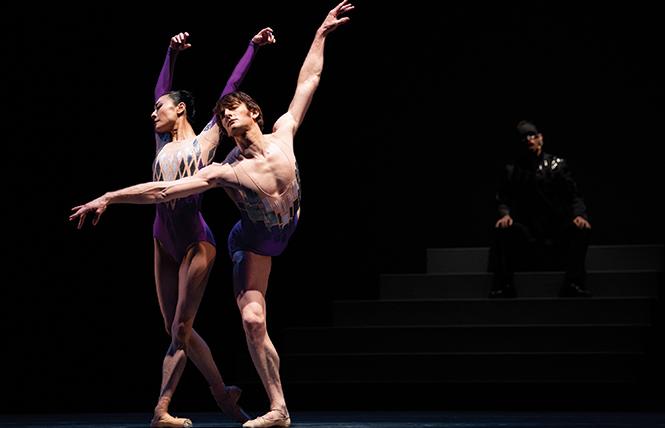 San Francisco Ballet opened its Programs 5 ("Lyric Voices") and 6 ("Space Between") last Wednesday and Friday nights at the Opera House. The two programs run in alternation through April 7, and both are well worth seeing, simply to see the kind of dancing our home team is capable of. Male dancing at this company has risen to a new level of quick release and freedom to move subtly and fast that I have never seen before.

The point of showing several short ballets instead of a full-evening piece is to vary the aesthetic. The evening is like a great three-course meal, each course requiring different techniques, moods, emotions, and the finesse to present them at the highest level. Both triple bills fit those specs. Each begins strong and keeps it up. "Lyric Voices" ends with a big piece by Yuri Possokhov, our Bolshoi Ballet veteran and principal guest choreographer. Alas, "two united in a single soul" looked underrehearsed. The brilliant set by Ben Pierce took up so much room onstage that it cramped the action. By the end of the run, the dancers will have worked that out, and I expect this to be ultimately the most remarkable ballet of all six. Already, the men are dancing with a level of fleetness and softness at full amplitude. It's a new generation. Possokhov's world-premiere ballet is worthy of the old school. He presents Narcissus himself (the astounding Joseph Walsh, whose fleetness in the legs allows fantastic whirlings in the upper body, with arms like tendrils), falling in love with his reflection and consuming his soul in unrequitable passion, perhaps the ruling passion of our times. 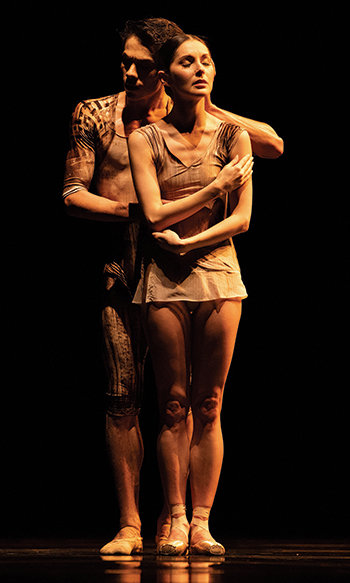 Curiously, Christopher Wheeldon's ballet "Bound To" (music by Keaton Henson, on Prog. 6) had also dealt with self-absorption, but as a blast at screen addiction. Dancers are holding cell phones (we're "bound" to them) and ignoring each other. Wheeldon rises above public service announcement, with many beautiful passages about the old days when we talked to each other, beautiful choreography showing children's games for girls and for boys, and a glorious pas de deux for Yuan Yuan Tan and Carlo Di Lanno that shows our ballerina at her finest, in a glorious duet about the kind of connection being lost. Although "Bound To" ends with a poignant solo, danced to the hilt by soloist Lonnie Weeks, for a youth "trying to breathe," the ballet feels like ephemeral journalism, not a ballet built to last.

The world premiere on "Space Between," by Liam Scarlett to Rachmaninoff's "Die Toteninsel" ("Isle of the Dead"), lives up to the majesty of the great Russian composer's sepulchral music, and the vision presented onstage is astonishing, rhythmically intricate, solemn, and exalting, in deep sympathy with the music. Dark as the subject is, the piece is glorious, and there's not a step wasted. Scarlett, choreographer in residence at the Royal Ballet, London, has a mise en scene by David Finn and costumes by Sandra Woodall that fit the bill, and dance phrases of a disturbing wave-like movement that comes on like a tide. Lauren Strongin, as the Maiden who must die, breaks your heart with her bravery as she chooses not Death but her beloved, who goes with her. That diagonal is so strong, the kind of thing that dance can do and words cannot. The crowd on the orchestra floor rose to cheer them.

There were lots of standing ovations. I cheered loudest for "Rodeo" (Prog. 5, Justin Peck, Aaron Copland), with its real poetic feel for the West. So many danced well in this: Jaime Garcia Castilla, Diego Cruz, Steven Morse, Henry Sidford, the god-like Wei Wang, Esteban Hernandez, and Hansuke Yamamoto.

"Your Flesh Shall Be a Great Poem" opened Prog. 5 with a solar eclipse projected onstage before anything happened. The sweet-fey folk songs of Chris Garneau gave a country-dance lilt to the dancing. I couldn't decide if these were polkas or Scottish reels, but they had the BUM-tiddy Bum-tiddy rhythm of both. Trey McIntyre's nostalgic dances have made a star out of Benjamin Freemantle, a poetic dancer from Western Canada and a poetic dancer with something of Gene Autry in him. There's a great lonesomeness in this piece. Of all the ballets, it's the one that brings tears to my eyes. In Freemantle's glorious performance, no single movement could be changed. He was ably assisted by the whole cast. The astonishingly light Sasha De Sola might have been a Prairie-Home Sylphide.

Often, the corps were the stars. Both shows open in big-sky, wide-open spaces, somewhere in the American West, and close with dances packed into dark decors. Program 6 ends with the splashy "Bjork Ballet," in which anybody can flare up like a supernova. It's a stylized rave, with its tinselly aesthetic on display. Daniel Deivison-Oliveira's outsized dramatic appeal staggered the senses, but he was just a walk-on. Ulrik Birkkjaer threw in about 16 bars of the Bluebird's fluttering brisées, a recognizable quote from "The Sleeping Beauty," before ducking under the huge red table on which the ballerina was cavorting.

Dores André was the star who pulled this riotous folderol together, the only dancer onstage who could command your attention. You're astounded by her strength, the power to coil her spine like a cobra, but foremost by her willpower, which she deploys in the manner of Bette Davis. She is top dog on this stage.