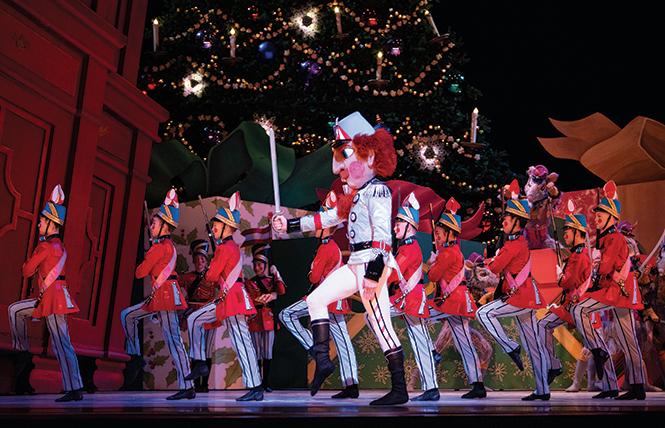 In 30 years of reviewing "The Nutcracker," with which San Francisco Ballet returned to the Opera House last Wednesday night, I've never seen such glorious dancing as they brought to the last act: exquisite classical dancing. In the "Dance of the Sugar Plum Fairy," the delicate chiming of the celesta matched Sasha de Sola's quiet stillness, her 21-jewel quarter-turns so clear, light, and easy they were a miracle. In her coda, when Tchaikovsky's thrilling music builds in mounting waves, her swelling dynamics matched his rhythms so she could steal time from one step to suspend another as if this were a conversation, and the elisions and emphases were just there to make sure you understood. It was dancing of genius. It's more excitement than you expect from the end of "Nutcracker." She made us scream. The run goes twice-a-day through Dec. 29, and it's well worth seeing.

It must be pointed out that SFB is in danger of tending only to the dance values: for years now, they've been neglecting the narrative and dramatic values that classic ballets require. Yes, this is a ballet for children (new starting time 7 p.m.), but "Toy Story" and the Harry Potter books had all come out by 2004, when the current production made its debut, and had made it clear that there was a huge audience for children's stories that paid close attention to the child's point of view.

"Nutcracker" is the story of the inner life of a middle-class girl. Her father is a doctor, her friends are invited to a Christmas party, along with their parents, and her brat of a brother breaks her toys, bullies her and behaves like Donald Trump. Luckily, her extremely cool, probably gay godfather not only feels compassion for her, but also wants to introduce her to a whole new realm of possibilities.

SFB's version stands in the shadow of Balanchine's great version. The "anxiety of influence" was at work, and Helgi Tomasson, in his generosity to outstanding versions from the past, including the historic SFB versions (1944 was America's very first "Nutcracker"), conceded too much. There's a plausibly gay Uncle Drosselmeyer, with the world's coolest haircut, the ambassador from the world of the imagination. He protects her through her nightmare, when it seems all the new desires her Nutcracker doll has aroused, the whole world of appetites, will be taken from her. The house is transmogrified, the Christmas tree grows to gigantic size, she's smaller than Alice in Wonderland! Gigantic mice leap out from under the tree, her Nutcracker comes to life and leads her armies against them, but in vain until she steps out herself and attacks the Rat King (magnificently embodied by Seth Orza, in a huge-thighed, hairy-legged costume). Distracted, the Rat suffers a fatal plunge of the sword from Nutcracker (heroic Aaron Robison), and the day is saved. All this to tremendous music from Tchaikovsky, who excels at transformation scenes. After the battle is won, the transition to the Kingdom of the Snow, and thence to Candyland, is a piece of cake, given the music that depicts it. 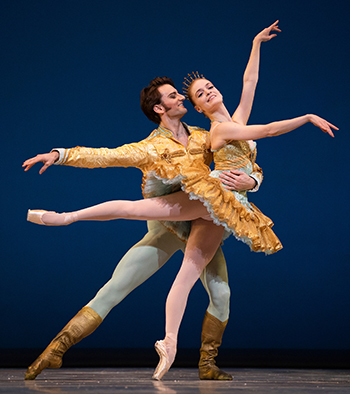 We've arrived at the crux of the matter. Although the ballet begins pianissimo, a child's fantasies are big as the ocean. In the child's perspective, by the time the Alice-in-Wonderland changes have transpired, the orchestra has become a very big deal, fortissimo! And complicated! So is the staging. This needs opera-house magic, and a great company of dancers to make it all happen.

The Nutcracker is transformed into a cavalier who can do tour jetes and double cabrioles and adores her. He leads her into the Kingdom of Snow (which falls like powdered sugar, to sublime music), where a Merrie Melodie of a blizzard gets danced by ladies in pointe shoes, a Snow Queen and King. The Queen of the snow (Mathilde Froustey) flies through her leaps as if she were on dry ground. Her cavalier (Carlo di Lanno) whips, darts, then lifts her. The pattern of steps is as exciting as they come.

The second act is basically a divertissement of national dances set to the Nutcracker Suite. Once we've gotten to dances, SFB is home-free. They can just dance, which they are very good at. These dances are presented to Clara and the Nutcracker prince, because "you have a brave heart," the Fairy says. The Nutcracker prince has explained what happened and how they came here, in thrilling mime and dance.

It's the McGuffin of SFB's version that the whole story has been re-set in post-earthquake San Francisco, 1915. The second act's set in the Hall of Flowers, where a throne for Clara and Drosselmeyer gets moved around as Spanish chocolate, French marzipan, Chinese tea, Arabian coffee, and Russian licorice each do their thing. The Russians are staggeringly exciting, in a troika choreographed by Anatole Vilzak many years ago, rightly retained by Tomasson. If you hate the idea of "national character" (without which all 19th-century music would have to be discarded), at least these "nations" all had empires.

The problem of this Nutcracker is looming: since the heroine is a 12-year-old girl, when it comes time for the fat lady to sing, it's going to have to be someone else. They do not handle this well. There is no music for the transformation of the child Clara into the ballerina who dances the Grand Pas. The production gave them no help at all.

Luckily, the dancers gave it to us, if the librettists-choreographers did not. The Spanish chocolate dancers were fabulous: Jahna Frantziskonis and Ellen Rose Hummel, with Alexandre Cagnat, Max Cauthorne, and Benjamin Freemantle; the Arabian dancers were Wan-Ting Zhao as the genie in the lamp, carried by Daniel Deivison-Oliveira and Steven Morse, unbelievably in synch; Lonnie Weeks excelled in Chinese tea as the acrobat chased by a 5-student dragon; Kimberley Marie Olivier, Maggie Weirich, and Ami Yuki were the three insouciant can-can dancers representing French marzipan; Esteban Frances led the Russians, helped by Davide Occhipinti and Myles Thatcher; Mother Ginger was Louis Schilling, festive as a chain of ragazzi poured out of her skirt, with a charming dancing bear played by Joshua Jack Price; not to mention too many flowers to mention, led by the brilliant Sofiane Sylve.