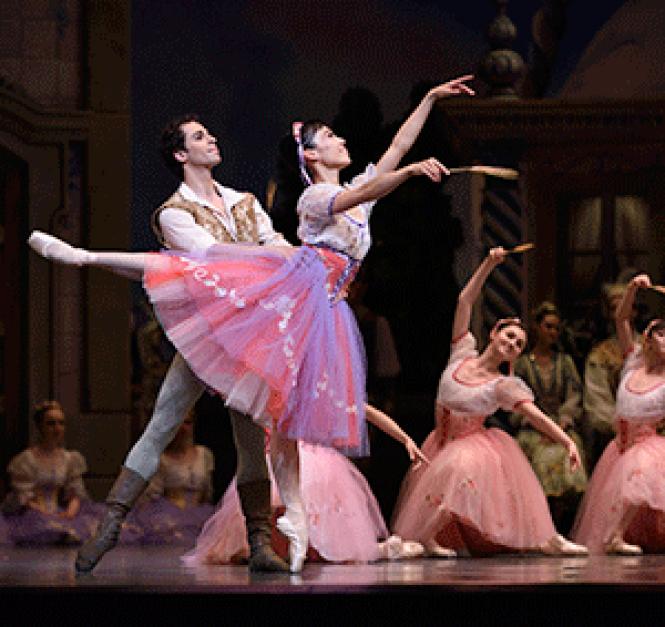 Last week saw two revivals of near-perfect ballets not seen here for years, synesthetic works in which the music, spectacle, and moves all unite to create pure delight. At the Opera House, San Francisco Ballet presented Balanchine's 1974 revision of Marius Petipa's classic Coppelia, and in Berkeley Cal Performances showed Mark Morris' 1988 masterpiece, also essentially a dance of joy, L'Allegro, il Penseroso, ed il Moderato, last seen here in 2009. Each had live music. The ballet's excellent orchestra played Delibes' 1870 score, and for the Morris, Philharmonia Baroque, the finest Baroque-music specialists in the land, played Handel's oratorio with first-rate soloists and chorus in the pit under the direction of Nicholas McGegan.

Balanchine knew Petipa's version of Coppelia in St. Petersburg before he defected to the West. He had danced in it, and loved it. He revised the Ballets Russes' shabby production of it in 1945 for Alexandra Danilova, whom the foremost critic of the day, Edwin Denby, called "incomparably brilliant" in "the most glorious dancing in the world." Thirty years later he revived it again, with Danilova's help, and restaged it for Patricia McBride and Helgi Tomasson. Tomasson, now the artistic director of SFB, brought it in as a vehicle for his own brilliant dancers, first in 2011, and again last week, when they covered themselves in glory.

I saw two casts: Tuesday's opening night, with Frances Chung as our girl Swanilda and Vitor Luiz as Franz, both very good. Wednesday featured Maria Kochetkova and Gennadi Nedvigin, who were superb. Both trained from childhood in Russia and grew up in story-ballets. Both were completely in character from the outset. Kochetkova's energy and wit made her "like champagne."

The ballet's tone remains borderline preposterous even as the story moves into dark material. Franz is infatuated with the mysterious beauty who sits on the balcony overlooking the square, not realizing she is a robot created by the crazy scientist Dr. Coppelius (Pascal Molat), who wants no less than to capture Franz, steal his life force, and animate the doll he has created. Swanilda sneaks into the scientist's workshop, pretends to be the doll, then pretends to come to life, creating artful mayhem and crushing the inventor's hopes, all the while remaining delightful.

Nedvigin was excellent. Not since Gelsey Kirkland's Giselle have I seen such a natural fit of role with performer. Everything he did was exactly right and never too much, even when in a farcical passage he hotfooted it across the stage like Bugs Bunny.

Balanchine created a complete third act, a wedding scene using all Delibes' music, to stage an allegory on the creation of new life through marriage: children, domesticity, daily life. There's a Dance of the Hours for 24 children, who were wonderful; Dawn, Prayer, War and Discord (centurions and Amazons). Finally, Peace, a brilliant wedding duet, took off into delirium. Everything sped up: the ballerina's circle of the stage doing pique turns became two smaller circles of the stage in the same time. Franz did the same, but with flying jetes, going so fast it made you giddy. When it was over, the whole audience jumped to its feet and screamed.

Morris' L'Allegro was dominated by the musicality of the ensemble dancing, an accompaniment to the singing and orchestral playing. The great scenes â€" the landscape created by dancers pretending to be trees and bushes, while foxes get chased by slavering dogs; the Shades disappearing into the mists of Elysium â€" are such brilliant feats of imagination that no single dancer stands out. As the choral voices swell up, these friezes move past us, merry or grave, as the visions conjured up by Milton's text emerge and dissolve. The delightful dances outnumber the penseroso passages, the greatest of which is the echo-duet of the nightingales (Maile Okamura, Lauren Grant) accompanied by the ravishing voice of Sherezade Panthaki, whose high notes bloom in out-of-this-world radiance.

The dances of joy carry the day. Dallas McMurray's larky bird-dance epitomizes the gay side; the slapstick men's dance remains side-splittingly funny, its humor contained by the forms of the central-European folk-dance it's based on. The secrets of this ballet lie in the intricacy of the folk-dance rhythms Morris has teased out of Handel's score and given his dancers, which give rhythmic organization to this rhapsody of visions and make it a piece that will last til the end of time. As long as dancers dance, they'll want to dance this.

Coming up: SF Ballet's Program 5, featuring Jerome Robbins' greatest work, Dances at a Gathering, with Yuri Possokhov's Swimmer. Opening tonight is our premiere modern dance company ODC/SF's winter season Dancing Downtown. Also this weekend, already sold out, is Trajal Harrell at Cal Performances, followed by the Alvin Ailey American Dance Theater at month's end. The Isadora Duncan Dance Awards will be given out March 21 at Yerba Buena (free to the public). Maybe I'll see you there.