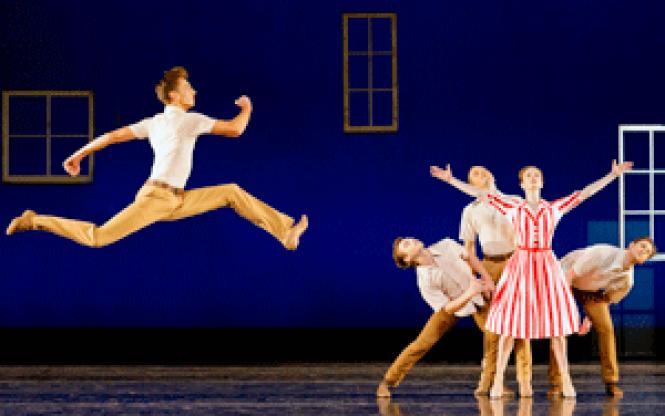 The ironies. This week there opened in New York City, to enormous hoopla and crushingly scathing reviews, a ballet by a former Beatle: Ocean's Kingdom, with a score by Paul McCartney; simultaneously, in San Francisco, the fall season of the Smuin Ballet opened, with the handsome showing of four chamber ballets. OK, where's the irony? Listen, my children, and you shall hear.

A quarter-century ago, it was Michael Smuin's ballet To the Beatles that got similarly crushing reviews from the international ballet critics, who were covering the LA Olympics arts festival when To the Beatles led the bill for San Francisco Ballet's gig there. He was then co-artistic director of the San Francisco Ballet, and those reviews led to his downfall. The reviews, and the PR nightmares that followed â€" front-page news day after day, Smuin fired, SFB board members conducting proxy-fights on the front steps of the opera house â€" were media events on the same order as the OJ chase, the Jonestown mass suicides, almost on the scale of Harvey Milk's electoral triumphs and tragic end.

Or at least, it was something like that. Obviously, this is complicated. The place of the late Michael Smuin in the history of dance, and of all the arts here, is one of the most vexing questions ever. It could be argued that it was time for a change â€" the mid-1980s saw a wholesale pulling back (what Joe Kramer, the founder of Body Electric, prophetically called "the Great Constriction") from the eroticized, fantasy-drenched culture of the 70s. Respectability itself gained new sway; "world-class" became a term of praise, and covertly meant New York standards. The poet Dana Gioia published O Fallen Western Star, lamenting the crushing of Western poetic voices, using criteria of the New York school.

There was more: SFB needed to professionalize or go out of business, and the arts-admin team headed by Richard LeBlond found Smuin impossible. Helgi Tomasson, when he came in, led SFB's transition, and has made a great classical company out of them, and nobody regrets that.

But still, Smuin was a major talent, a great entertainer with a disturbing power to reach very deep, and come up with something true and passionate. For every over-the-top, tasteless, embarrassing piece of Smuin's, there was a great one; his Romeo and Juliet is one of the very best ever choreographed. His Song for Dead Warriors, about the subjugation of the American Indian, was emotionally direct, theatrically staggering. The televised version of it won the Emmy for 1984. Smuin (who died in 2007) won several Emmys, not to mention Tonys and Drama Critics Circle Awards. After a lot of Broadway (Anything Goes) and movie work (Cotton Club), he founded Smuin Ballet here in 1994, and had made a good go of it ever since. I can't help wondering if Smuin couldn't have made a hit Broadway show out of McCartney's ballet score.

In any case, it's great to report that Smuin's protegee Amy Seiwert has made a completely delightful ballet, in the Smuin style, to music by Patsy Cline. It's a character piece: the women wear pretty, 50s-style shirtwaist dresses in peppermint stripes (by Joellen Arntz and Seiwert), and suffer in pretty much the ways Patsy Cline did, wryly chagrined in a manner that pretends to be country but is in fact universal, in one song after another.

Dear Miss Cline is a series of choreographed skits, casually sophisticated, that distort classical forms to make them look rural while letting the grand pirouettes float and hover and suspend â€" which satisfies the balletomane's desire to see elegance and grace, and also expresses the hopes and desires of the young lovers, just before, of course, they do something wrong and the lover walks out.

Â Miss Seiwert is perhaps the most talented and prolific young choreographer working from a ballet base around here. Like Smuin, she is a generous worker, well-liked in the community, quick to help other dancers, and like Smuin, she is very inventive. Her specialty is reconfiguring the body into surprising new articulations â€" "How'd that leg get over there?" Her ballets can look unedited, like she's poured out too many ideas and not pruned enough. This time she's found a happy through-line, and managed to be not just witty but include a belly laugh. And one piece, "Pick Me Up on Your Way Down," closes on a moment of quiet surprise that's truly satisfying.

She's chosen shrewdly from the Cline canon. Wisely omitting "Crazy," she's only used "Walking after Midnight" and "She's Got You" from the celebrated numbers, and included items like "I Don't Wanta" and a version of "Bill Bailey, Won't You Please Come Home?" (in which Miss Cline valiantly tried not to swing, and thank God, she failed).

The ballet is a thorough-going success; you can always hear the music; the dancers, who have excellent technique and musicality, are adorable throughout; there's especially fine work from Jane Rehm, Susan Roehmer, Jonathan Dummar, Christian Squires, John Speed Orr, and the ever-fine Erin Yarbrough-Stewart.

The other wonderful piece on the show was Smuin's own "Tango Palace," a character ballet using the style, imagery, and attitudes of tango to make a ballet very finely wrought, using the techniques of August Bournonville to make dances with beautiful gradients in the rhythms and scale of the steps, so the many small steps make the medium-sized ones blossom quickly and fade, and the truly grand ones stand out in all their Latin splendor.

SF's popular tango teachers Christy Cote and Daniel Peters coached the dancers in style. There are the expected sexual tango-games, but with surprises: when the come-hither girl suddenly spurns the guy she gave the eye to, another guy steps up and we get to see two men (Squires and Shannon Hurlburt) dance superbly to the song instead.

"Tango Palace" is modeled after Balanchine's Liebeslieder Walzer. The first half has people in evening clothes and heeled shoes, with a second half under the stars (ladies in pointe shoes). Smuin's second half does not, alas, transcend the first. The piece closes strong, however, with the mind-expanding use of Edith Piaf's "No, je ne regrette rien," a tango from the streets of Paris.

Also on the program were Smuin's Eternal Idol, a duet in nude tights from 1969, when the sexual revolution was young, made for the superstar ballerina Cynthia Gregory; andÂ  Smuin's 2002 full-cast piece Stabat Mater, a memorial to those who died on 9/11; Erin Yarbrough danced the lead with grace and nobility.