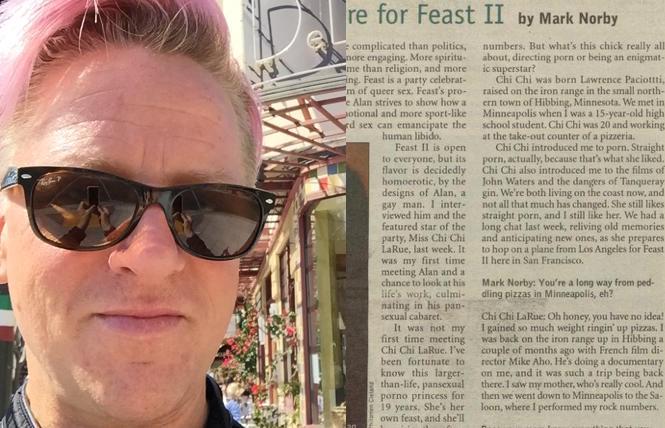 In 1985, I moved from Minneapolis to attend the University of San Francisco with a double major in humanities and communications. I was eventually admitted to USF's Honors College where I learned to fall in love with learning. Planting new roots in San Francisco enabled me to flourish as an independent person in a place very different from where I had come. It opened a universe of possibilities combined with the pride I found in discovering there was a city that embraced me as a queer person.

On weekends, friends from the university joined me and we escaped our dorms, left the work on campus, and explored the richness of the city's nightlife. Hitting the bars in the Castro, dipping into the seediness of the Polk, going to the Alta Plaza Bar gay men's club in Pacific Heights, and eventually finding the hidden parties South of Market delivered new texture to the very act of living.

I remember one Saturday night when I had heard about the Art Motel nightclub at the corner of 9th and Harrison Streets. Its name alone had driven me to rally my tribe and head for the club.
We arrived at the Art Motel to discover an authentic motel that closed years earlier and that later turned into a squat flophouse transformed into the nightclub. With a check-in lounge, bar, conference and ballroom, and a stairway that led up to the second-level motel rooms, all transformed into the creative spaces of a club like I've never seen again.

Little did I know that one day the second-level motel rooms would become the different offices of the Bay Area Reporter, and that I'd be working at the paper as an assistant editor. The most-recent incarnation of the Art Motel and the Bay Area Reporter was The Stud. If you've been to the Stud, you've been to what was once the Art Motel, its second-level rooms converted to the club's art galleries. 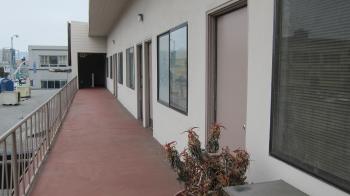 the upstairs offices of the B.A.R. on 9th St., a former motel

On the Job
Not quite a decade later, I decided to quit my job as an account executive for a technology firm and decided to go back to what I loved, writing. I collected a stack of papers that served as my writing samples, brought my resume and with no appointment, walked into the old offices of the Bay Area Reporter, the first building northwest of The Stud on 9th Street. I asked to see editor Mike Salinas. To my surprise he came down. I introduced myself and we shook hands. I told him I wanted to write for the paper. I gave him my resume and writing samples and he told me he'd give me a call.

The next day, Mike called. We made an appointment to meet at the paper's offices and to go have a drink and chat about what I could do, and what the paper would offer me. We went to the bistro that then was located on the corner of 9th and Folsom. He had a glass of wine, I had a beer. We talked about my past work as a writer.

As an editor my first job at the Hoover Institution at Stanford University was the polar opposite to what I would step into at the B..A.R. While a graduate student at Stanford, I served as assistant editor to the scholars at Hoover. Two years prior, I had worked as a reporter for USF's student newspaper, the San Francisco Foghorn, and I founded the school's literary magazine The Ignatian. The next day Mike called and offered me a job as an assistant editor. 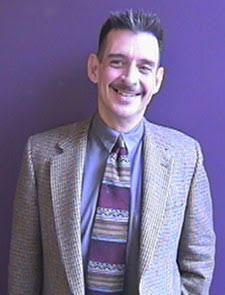 My first day on the job I was given the standard tour of offices and introduced to staff. I was shown my desk next to assistant editor Cythia Laird. I was then escorted upstairs—the old motel's stairway that then led up to the walkway/balcony that looked down onto The Stud.

Michael Yamashita led me past the various offices of management. The western-most room, once the ex-motel room and meat gallery, became the office of graphic designer Adriana Roberts. Dead rotting animal parts in gold baroque frames popped into my mind as I shook hands with Adrian's coworkers, Kurt Thomas. Kurt stood next to the motel room bathroom, again a classic motel design with little scrabble-square floor tiles, wall tiles, all of them baby blue.

The next office had become editor Mike Salinas' space. To this day, my position at the paper has been one of my very favorite jobs. I loved my work, I loved representing the LGBTQ community, I loved the people I worked with, and still do.

Concerts and controversies
Some of my reporting included the feature, Martha Wash goes to Heaven. In the article, I not only go into Club Heaven but also my first Sylvester concert with Wash, a backup singer alongside Izora Armstead, all three Oakland and San Francisco natives. 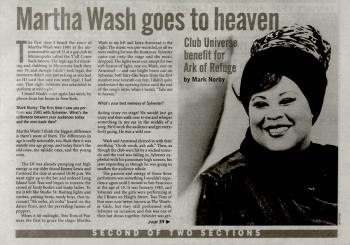 This brings me to some of the coverage I really like through the history of the B.A.R.: drugs and overdoses. Not because I'm into the grotesque, but because I think the paper has done such an excellent job at bringing awareness to the LGBTQ and wider communities, of the clubs and raves and sex parties where revelers have too often taken things one step too far.

I remember all the GHB overdoses while on staff that occurred not just citywide, but Baywide. See "SOMA nightclubs under fire."

Later, I researched and wrote "Wetback Night at the Stud: racism or 'Trannyshackles?" The controversy—an annual celebration of Latino drag queens, their roots, their pride in being queer, out, and Latinx. In the article the queens simply referred to themselves as Latino. Times change, names change. For example the drag and trans communities no longer use the word tranny; Latinx hadn't entered popular usage before 2004 (the article was written in February 1999).

The article featured the Stud's co-owner Michael McElneney, who told me he'd let the Latino community work out the issue for themselves. At the time, the party's co-producer Lady Sergio told me: "I am a Mexican-American and proud of it. If anyone has the right to use the word 'wetback' it's me!"

The infamous founder of Trannyshack, Heklina, commented to the Bay Area Reporter that "Anyone who knows me in the least knows that I love to stir up controversy. In these oh-so-politically-correct times, it's ever so easy to do. I don't pretend to do it under the guise of creating dialogue or raising people's awareness. Not really. I just love to stand back and watch people whip themselves into a frenzy." Ultimately, the party's name was changed to "Mexican Heritage Night." 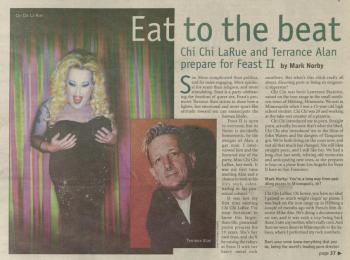 Little-big ol' Larry —she was a large-sized queen at the time, a Divine-like personality bound for fame— worked at a pizzeria's pick-up window when I first discovered him. For juicy details of what she staged in San Francisco with party producer Terrence Alan in April 1999.

There's so much more in the archives but never forget, no one knows camp like the queer community.

Putting the paper to bed
Production of the upcoming weeks' new issues began on Thursday mornings, with work continuing over the weekends. By Monday mornings all the hustlers would stream into the paper to place their weekly ads with advertising manager David McBrayer. By Wednesday afternoons, we'd put the new issue to bed having finished the then print-only edition.

Every day was very different from the next. But it was those Wednesday afternoons that I'll remember the most. Cynthia Laird was still busy compiling data for next week's issue, I was doing the same mining my own head for as many facts as quips, sentences and headlines for upcoming articles that would meet the criteria of the astonishing abilities of editor Mike Salinas.

Mike allowed me to become my own writer, enabled me to find my queer voice, and he was straight-up cool to work for, no bullshit, always shot from the hip. Our devastating loss when, in 2003, Mike died in New York City, will not overshadow our trio's Wednesday afternoons, when Mike would come downstairs from his second-level office, and with an index finger, tap me on the shoulder and say, "Meet us at The Lone Star." He left.

Cynthia duly followed him. I shut down my computer and neatly stacked the scattered papers on my desk, said "Cheerio" to the front office staff, and went down the block to the bar.

When I stepped into the Lone Star, I saw Mike and Cynthia in the distance, ordering their drinks. Mike always, always ordered his trademark Cocksucker Coffee. Cynthia and I both ordered pints of beer. Being the last to arrive, I had to wait for my beer while they went to the patio. When my beer was served, I paid, thanked the bartender, grabbed my pint and joined Mike and Cynthia.

Another issue complete, another reason to relax and be grateful to live in San Francisco before what was on the horizon: the turn of the millennium and another kind of the city by the Bay. You may ask, where's the fairy dust gone? Oh, it's out there. It's out there somewhere.