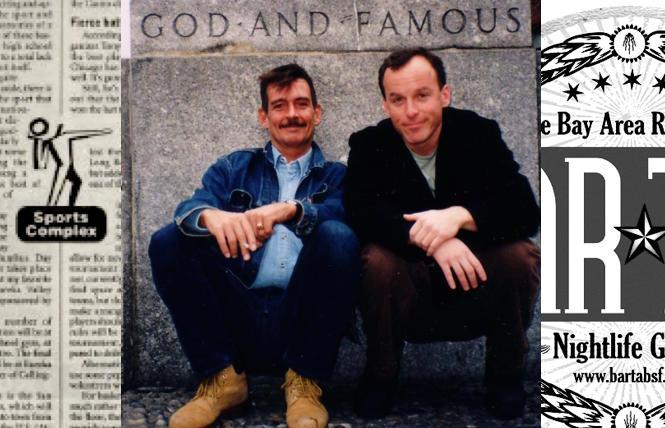 With more than 900 articles penned for the Bay Area Reporter, I feel a strong connection as the newspaper celebrates its 50th anniversary this week. I've written columns, listings and reviews since 1992. Having assigned and edited the expansive features in this section, I thought to share some behind the scenes tales as well.

My career in journalism started in 1989 in New York City with OutWeek, the revolutionary weekly publication that emerged from ACT UP, Queer Nation, but didn't last long.

After a 1990 visit for the OutWrite literary festival, my second working visit to San Francisco was in early 1992, on a freelance assignment for Frontiers magazine to cover Ggreg Taylor's Lavender Tortoise bus trip to Reno. I got to witness the 'marriage' of 'Elvis Herselvis' Leigh Crow and Justin (not then Vivian) Bond.

Along my immersion course on wheels into the Bay Area's cleverest nightlife folks, I'd also brought a few resumes. While a Guardian editor offered me an internship (as if!), the B.A.R.'s publisher Bob Ross offered me a trial run to replace Mike Yamashita, who was compiling event listings and had a month's vacation planned. While my start as a San Francisco resident and B.A.R. reporter was initially tentative, my residence and the fill-in job became a permanent one. 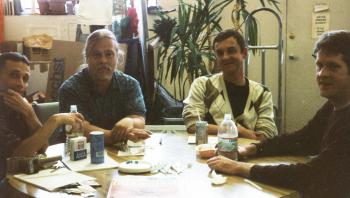 From 1992 to 1994, along with assembling events with multi-colored fliers from Josie's Juice Joint and Theatre Rhino, I also typed up the BARtalk personals ads, a duty that revealed the varied desires of multiple anonymous San Francisco men. I revamped the listings to be more visual, assisting production guys Robert Dietz and Robert Hold in the drafty downstairs back room that sometimes smelled of Photostat chemicals and the burning waxer machine, still used for assembling printed-out 'boards' of the newspaper's pages. I'd also retrieve computer floppy discs and print-outs from visiting freelancers like Michael Botkin and Kate Bornstein.

I also had the more serious task of writing up handwritten obituaries, some of them of men I knew who had died of AIDS. I'd often have to call back surviving partners who'd omitted their own names.

Daily staff lunches were gossipy and fun, particularly with assistant editor Patrick Hochtel, advertising's David McBrayer, and assistant news editor Dennis Conkin. But the shining inspiration to me —for many others at the time, and years later— was the late Mike Salinas, the B.A.R. News Editor from 1992 to 1999. 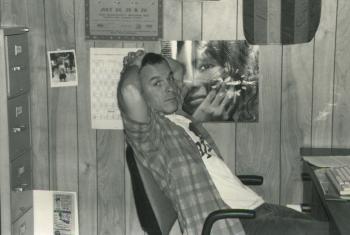 Mike Salinas had been creator of Theater Week back in New York. He and I shared a love of Stephen Sondheim and other musical theater. His deft ability to create what he called 'the triple-entendre headline' was an inspiration, as was his focus on celebrating the community as well as critiquing it where deserved.
He took no prisoners in his sassy responses to Letters to the Editor, a standard response being: "If you are dissatisfied with our publication, you may return it for a full refund."

But in a diva moment over an argument with a production designer about photo placement in my too-long Stonewall 25 article, in 1994 I abruptly resigned, a decision I regretted. But my link to the B.A.R. would soon reconnect. 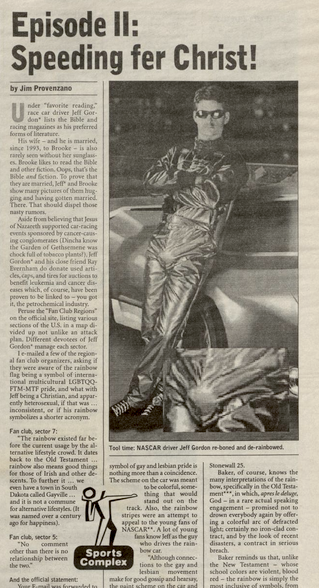 One of many satiric Sports Complex columns, about race car driver Jeff Gordon, in Jan. 13, 2000

Sports sort
In 1996, Mike asked me if I wanted to write a sports column, since at the time I was working on 'that wrestling novel' (PINS, 1999) and an active member of Golden Gate Wrestling Club. The title, Sports Complex, came to me instantly. I hoped the column would allow me to not only write about sporting events (like my B.A.R. predecessors, including Nancy Boutilier, Rick Thoman, Mark Brown, and Tom Waddell), but also explore the complex feelings that many LGBT people have about athletics.

Sports Complex became a popular weekly column from 1996 to 2006. Through it, I got to meet hundreds of people in multiple sports around the world, some pioneers and ceiling-breakers and athletes who viewed sport competition as a critical part of their life and community. The column eventually became syndicated and published around the U.S. and world.

My first Gay Games was in Amsterdam in 1998. Before it began, the rumored financial controversies proved true upon our arrival, but were obfuscated by the event organizers from the beginning (pickled herring served in a church reception) to the closing ceremonies (bikes, motorcycles and mini cars riding on top of a rainbow flag).

I shot video (20 hours that may someday see the light of day), which I later transcribed and video-captured for print and web columns. But more important, I took the athletes' point of view, particularly at events were restrooms were closed, no food or water was provided, and inept judging screwed up events.

But the worst case was Figure Skating. Organizers lied about failing to get it sanctioned, and the highly competitive event was reduced to an exhibition. Perhaps the bittersweet highlight of the entire trip was watching two male-pair San Francisco figure skaters perform what should have been their gold medal event.

The coverage of Gay Games Amsterdam proved my Sports Complex could bring community sports reporting with some bite when LGBT athletes were exploited by organizations that claimed to represent their interests. 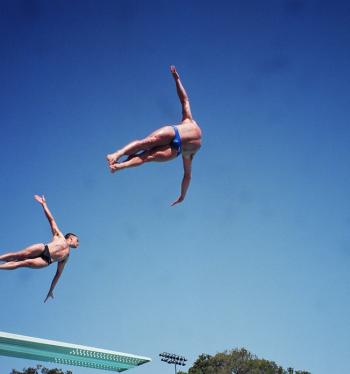 Down undah
Sports Complex traveled the world again in 2002, where I reported on events at the Sydney Gay Games, from diving to ice-skating and even ballroom dancing, documented in 70+ interviews and 30 rolls of film (yes, film). Being able to use two-year-old Olympic facilities gave the events class. There were a few controversies, but a lot of fun, particularly the pool party with frolicking water polo players.

And despite being previously wined and dined in 2001 by Montreal representatives on a press junket, as 2006 approached, the huge financial controversies and split between the created OutGames and the traditional Gay Games filled up my columns week after week. I had the thrill of being personally attacked in two languages, English and Quebecois, on multiple websites. Yet, the record shows I was proven right; the OutGames died a flailing death years later.

Chicago's 2006 Gay Games proved to be a more authentic and thrilling week of events full of fun adventures, if not less international.

With this coverage, and my previous 1998 eight-part series about the financial controversies of the AIDS Rides, I learned the variance of opinion and objectivity, the beauty of photographing athletes moving through space, and the joy of sharing their passion through my words and pictures. 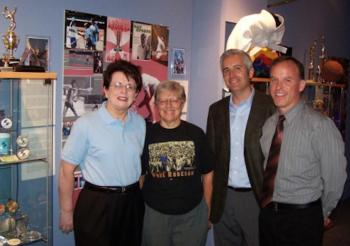 The culmination of ten years of sports writing (more than 500 articles) led to being honored at a Gay Games ceremony dinner in 2006. A year before that, Don Romesburg of the GLBT Historical Society asked me to guest-curate what he titled Sporting Life. While collecting hundreds of loaned and donated items from dozens of supporting groups, I got to design and build, with numerous volunteers, the second major exhibit of the then-downtown museum. Over the next two years, hundreds attended special events, and celebrity visitors included Esera Tuaolo, Rudy Galindo and Billy Jean King. And I owe it all to Mike Salinas.

Room upstairs
Returning full-time in 2006 proved a more comfortable when I got to work in an upstairs office with Arts Editor Roberto Friedman. After replacing Mark Mardon, who had replaced me years before, I got to write stories, compile the listings (fewer flyers, more emails by this time) and also bring my Internet skills to edit the then-frequently crashed or hacked website.

Among other duties were editing Sweet Lips' column, in the '90s actually ghost-co-written by Patrick Hochtel, and later Coy Ellison. Marcus Hernandez's Leather columns didn't need editing, which almost to his last days were letter-perfect. 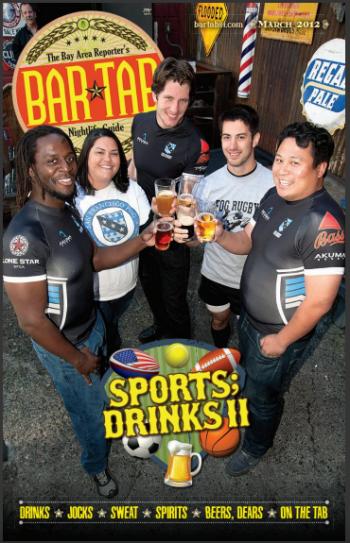 Members of the SF Fog Rugby team at The Lone Star.  (Source:Georg Lester)

In May 2010, Production whiz Kurt Thomas designed the logo for what would become our monthly nightlife mini-magazine. As with Hunt back in New York, the idea for the title BARtab came to me in about five seconds, since it was such an obvious play on words, the Bay Area Reporter's name harkening back to our 'bar rag' roots.

The appearance of BARtab allegedly riled the publishers of a certain other glossy nightlife magazine. They may have failed to remember that at one time there were five LGBT other publications in the Bay Area, including Spectrum, The Sentinel, Gloss, The Bay Times, and Frontiers San Francisco.

We owe the main look and feel of BARtab not only to Thomas' beer coaster logo (which was also used for real drink coasters), but to photographer Georg Lester, whose brilliant —elaborate or easy— photo shoots depicted various nightlife themes.

From the first issue, the BARchive column proved popular, penned by myself, then the late Jim Stewart, and Drummer Editor and author Jack Fritscher. Michael Flanagan has since maintained the column with fascinating historic essays.

From 2013 to 2014, the B.A.R. combined spaces and resources with three other newspapers in a downtown office, and we bid farewell to the former motel space. 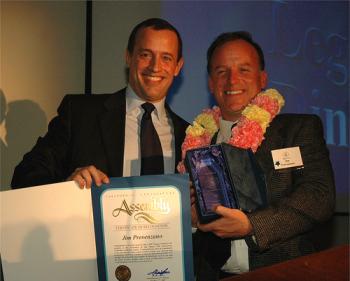 While the 'open desk' format proved irritating, the weekly free lunches were tasty. The best idea, from one of our investors, was to change BARtab to a weekly third print section. I assigned and write more content, and added weekly photo shoots by Stephen Underhill.

Representing the nightlife community in all its diversity by gender, color, age and ability is very important to me, because what I'd seen previously in other gay media was a focus on beauty, mostly white and male.

Our 2014 move back to independence (while narrowly escaping the fate of the Guardian) in our current Hayes Valley office worked out great for me, since I live nearby.

But none of us could've expected the enormous drop in advertising and revenue at the break of the pandemic in March 2020. This led to the departure of two employees, including Arts Editor Roberto Friedman. With some erudite shoes to fill, I attempted to blend not only our tradition of diverse arts coverage, but also my nightlife experience, and my technical skills in various media.

For the B.A.R.'s 40th and 50th anniversary, I made tribute videos based on the collected covers assembled by photographer Rick Gerharter. Being a tangential part of another GLBT Historical Society exhibit was another honor.

As we attempt to keep up with all the trends and TikToks, it's important for younger readers to understand (and elders to recall) just how darn difficult it was in the old days with fax machines, floppy disks, and paste-up boards. It's been said that Bob Ross and Paul Bentley started the B.A.R. with some simple clip art and hand-typed text pasted together on a kitchen table. That seems appropriate, since we've been feeding important news and entertainment to our readers for half a century.

You'll notice that several of the online articles in this week's section have multiple links to vintage issues of the B.A.R. Do click away for some fascinating reading.

At each of our offices, I've always kept nearby a few bound print collections of the first two years of the Bay Area Reporter, not only to enjoy a nostalgic look at the campy ads and historic articles, but to remind myself of the legacy that's now also my own. 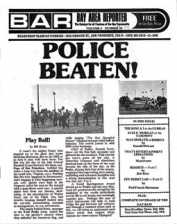 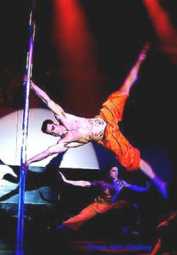