Capital ideas: an interview with Kim Roberts, editor of 'By Broad Potomac's Shore' 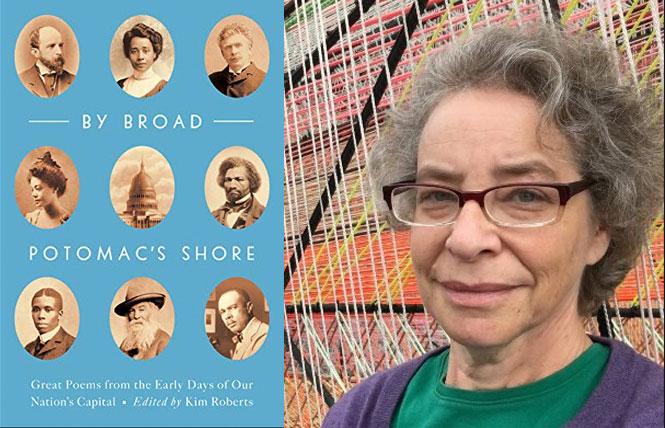 As compared to New York, San Francisco or Chicago, Washington, D.C. might not be among the first places the average person thinks of when it comes to poetry. But thanks to queer poet, historian and educator Kim Roberts, that's changing. Beginning with her groundbreaking 2018 book, A Literary Guide to Washington, DC: Walking in the Footsteps of American Writers from Francis Scott Key to Zora Neale Hurston, Roberts wisely turned our attention to the city's rich literary history.

Her new book, By Broad Potomac's Shore: Great Poets from the Early Days of the Nation's Capital (University of Virginia Press, 2020), narrows her expansive focus from all writers to just poets (132 of them), including a substantial portion of whom were queer. The result is an indispensable collection honoring and celebrating a too often overlooked literary hub, one that is finally getting its chance to shine like a beacon. 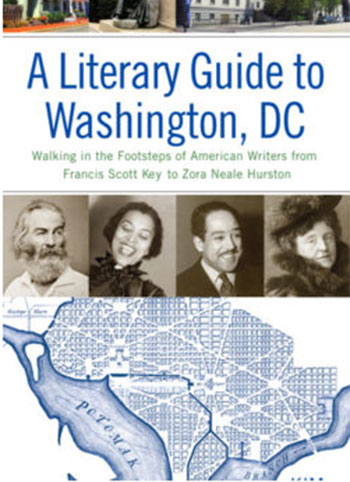 Gregg Shapiro: How much of your new anthology was inspired by your previous book, 2018's A Literary Guide to Washington, DC?

Kim Roberts: I think of this new anthology as an extension and a direct outgrowth of my previous book. With the walking tour format of A Literary Guide to Washington, DC, I was only able to feature the work of twenty-one authors. By Broad Potomac's Shore collects 132 poets, all living and actively writing between 1800 (when DC was founded) and 1930. Some authors are represented by a single poem. Others deserve more critical attention and I've reprinted a larger selection of their work. In the anthology, I was also able to include more authors whose names are less well known, who will be new discoveries to most readers—especially women authors, working class authors, and authors of color. While I still feature some well-known poets, such as Walt Whitman and Paul Laurence Dunbar, I took this opportunity to open the discussion a little wider.

By Broad Potomac's Shore seems like a considerable undertaking, from research to permissions, and so on. How long did it take from start to finish?

I'm not quite sure where to start measuring this. You could argue that I've been working on this book for over thirty years! When I first moved to Washington, DC in 1987 I wanted to learn about the city's literary history. That was just my way of claiming this place as my own. So, I have been collecting material about some of these authors for a very long time. But when did I know I was actually compiling a book? I'd say about four years ago. 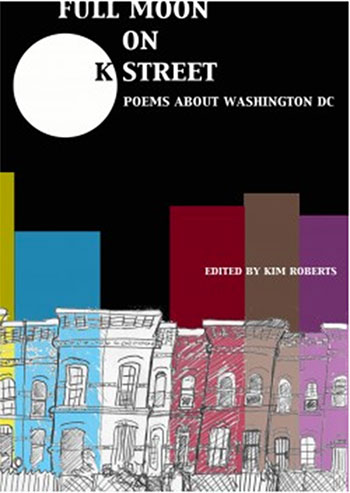 In what ways do you think the years you served as founder and editor of Beltway Poetry Quarterly, as well as your experience editing the 2010 Full Moon on K Street anthology, helped in the editing process for By Broad Potomac's Shore?

Both those earlier experiences gave me an invaluable background in editing, which of course is a learned skill. I hope I've gotten better at it the more I've exercised those critical muscles! I know that it's something I love to do. I have a fascination with how writers create community, how circles of friendships and mutual support intersect. And all three of these projects are, in a sense, a way to map those circles of connection.

By Broad Potomac's Shore is divided into five sections, 'The Earliest Bards,' 'The Rift of the Civil War,' 'Poets of Moral Persuasion,' 'Poets of the American Scene,' and 'The Rise of the Personal.' Please say something about the process of naming and filling the sections.

Originally, I arranged the poets chronologically by birth date, but that arrangement ended up feeling rather stagnant. This current thematic arrangement allows poems to speak to one another, to spark up against one another. One of the things that became increasingly apparent to me in the process of compiling this collection was how much poetry was used in those earlier eras as a tool for Americans to define themselves.

You have to remember how much more popular poetry was in the 1800s. It was everywhere: memorized in school, set to music and sung in churches, printed in every newspaper and journal. Friends copied out poems they liked and included them in correspondence. At family gatherings, poems were recited. So, the poems from these eras never shied away from commenting on the major political issues of the times, from abolitionism to war, from women's rights and civil rights to the role of government in our lives.

And, of course, there were poems about nature and family and patriotism and love as well. It seems that there were always poems commenting on the distance between American ideals and the reality of our daily lives. So, I wanted the organization of the book to follow that arc. In the end, while this is an anthology covering one city, it ends up being a collection of poems that are emblematic of the nation as a whole.

By Broad Potomac's Shore includes a number of queer poets, including Walt Whitman, Natalie Clifford Barney, Rose Elizabeth Cleveland, Charles Warren Stoddard, Alice Dunbar-Nelson and Angelina Weld Grimke. Please say something about the importance of having a queer presence in an anthology such as this.

These are some of my favorite authors in the book! You simply cannot create a survey of American poetry without including the invaluable contributions of LGBTQ+ authors. While Whitman is well loved (and he provided the book's title), I wish more people knew about Natalie Clifford Barney, the first woman poet to write openly about lesbian desire since Sappho.

Rose Elizabeth Cleveland, a lesbian, served as First Lady for her bachelor brother prior to his marriage—but how often do we talk about queer leaders who occupied the White House? And the Harlem Renaissance-era writers Alice Dunbar-Nelson and Angelina Weld Grimke should, in my opinion, be embraced into the American literary canon right alongside Langston Hughes and Zora Neale Hurston (who both also lived in DC, and who ran in the same circles with Dunbar-Nelson and Grimke. And were both queer as well). This is our sacred literary heritage.

We are currently living through an especially tumultuous political period. What do you think readers of By Broad Potomac's Shore can learn from the role poetry played in our nation's capitol?

I think you can't help but read these poems and think of our current moment. The selection of abolitionist poets immediately brings to mind the Black Lives Matter Movement. And the period prior to the Civil War, when politics were so painfully riven, has strong echoes of our own widening rift between political parties. Then, as now, it feels like the two sides speak in a completely different vocabulary. I believe strongly that we need to know this earlier history—it grounds us. It teaches us how we can move forward.

In early October 2020, in time for the release of By Broad Potomac's Shore, a virtual book release party and cocktail hour is planned. In the midst of the pandemic, what other plans do you have to promote the book?

I'm working with a filmmaker, Jon Gann, to produce a series of twelve short videos, and we'll be releasing one per month. Each film will feature a single poem by an author included in the anthology, and will be filmed at a different iconic DC location. Each location has been picked because it relates to the poet we'll be discussing, and each will be released in a month that is significant for that author.

So, for example, we'll start with a Natalie Clifford Barney poem for LGBT History Month in October, showcase a Frederick Douglass poem timed for the conjunction of the anniversary of his birth and Black History Month in February, and release a Fanny Jackson Coppin poem in time for Juneteenth. It should be a fun project. Several award-winning poets with strong ties to DC have agreed to serve as readers, including Dan Vera, Anya Creightney, Hayes Davis, Teri Ellen Cross Davis, and Regie Cabico.

Of course, I will miss the opportunity to give in-person talks and readings! But I've got some other online events I'm lining up in the coming months as well. That includes a podcast on "The Poet and the Poem from the Library of Congress" and a Scholar Spotlight slot at the annual DC History Conference.

Could there possibly be a second volume of By Broad Potomac's Shore picking up where you left off with the first?

Everyone asks that question [laughs]! I'd love to turn my attention to something else next. Something completely new. I won't rule out another anthology completely, but perhaps not for a long time.

For nearly 40 years, readers of poetry are familiar with your name as a poet whose work has appeared in a multitude of literary journals and anthologies, as well as your own poetry collections. What do you think the historical and scholarly turn your writing has taken says about you as a poet?

The research I do as a literary historian combines my major passions: literature, and the history of cities and our shared built environment. Those same obsessions show up in my creative work. For me, the two types of work come from the same source. But, having said that, my newest poems do seem to be heading in a new direction. I'm writing poems that seem to be more personally revealing than I have in the past. I've got a bunch of new love poems I'm working on, inspired by my girlfriend.

In addition to your long career as a writer, you are also an educator. What does that aspect of your work mean to you?

I love teaching! Since 2005, I have taught a memoir writing class for senior adults, and since 2013, I've co-taught a class at the Folger Shakespeare Library with Teri Ellen Cross Davis. I also regularly guest teach at area colleges, recently at such institutions as the George Washington University, Johns Hopkins University, and the DC campus of the University of Notre Dame. I also conduct walking tours, or at least I did until the pandemic, and I assume at some point that will resume; that's a kind of teaching as well. Writing is such a solitary act, so it's great to have the opportunity to do something communal. And what's better than getting to talk about great literature with like-minded souls?

You've lived in a variety of cities and towns over the years including Charlotte, NC, Westport, CT, Cambridge, MA, Boston, MA, Tucson, AZ, Ann Arbor, MI, Silver Spring, MD, and Washington, DC, which is where you have lived the longest. When did you know that DC was home?

Because I moved around so much in my early adulthood, it felt wonderful to finally find a place to settle, to really dig in. I think it took me about a half dozen years in DC before I realized I wasn't leaving. And when that realization dawned on me, I discovered that it made me very happy. This is such a complex city—often maddening, but also endlessly fascinating. It is home. 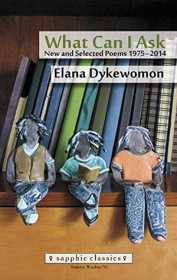