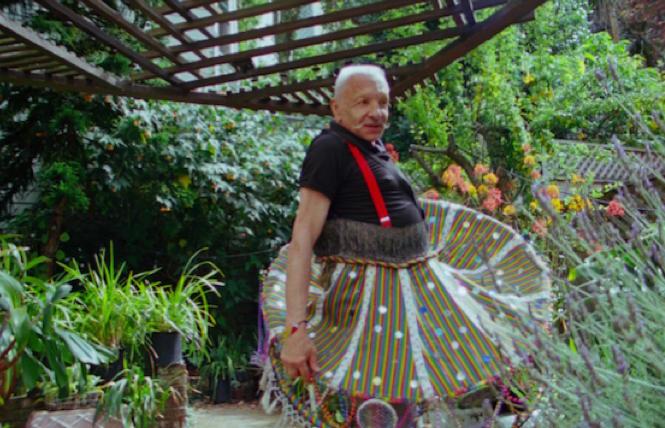 Miguel Gutierrez, the subject of 'My Neighbor, Miguel'

What do you do when your neighbor is a famed local costume designer? If you're Daniel Navarro, you make a film about him. In My Neighbor, Miguel, the life and creations of gay Latino designer Miguel Gutierrez gets a well-deserved intimate portrait.

Shot in 16mm film to retain a visual sense of history, Navarro interviews Gutierrez, now 72, as he shows some of his innovative sculptures and costumes.

He also shares stories of meeting the love of his life, the joyous celebrations, and living through the AIDS epidemic in San Francisco as an HIV+ man. Included in the film are vintage film clips of people in Gutierrez' colorful costumes through previous decades (clips found in the archives at the GLBT Historical Society).

"Miguel was my former landlord in San Francisco," said director Navarro. "Each month, I would see him hang beautiful art pieces outside of my living room window which faced McAllister Street for all to see. I fell in love with these pieces and became fascinated with their elusive maker who donned a thick Colombian accent and handlebar moustache. 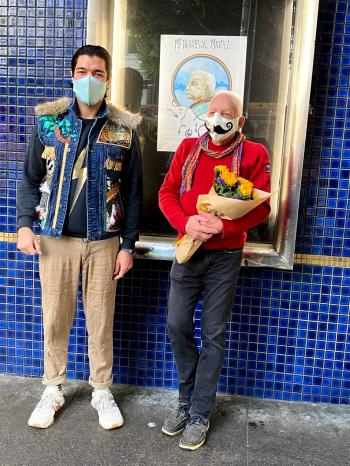 filmmaker Daniel Navarro with Miguel Gutierrez outside the Roxie Theater.

"Over time, Miguel and I became friends which is how I learned about the story behind his art and how delicately intertwined it was to his past. I shared this story with some incredible artists, documentarians, and musicians who all rallied together to help tell his story."

Gutierrez recently enjoyed a private screening of the film at the Roxie Theater. The film was awarded a Vimeo Staff Pick before release. The film premieres on December 1 in recognition of World AIDS Day.