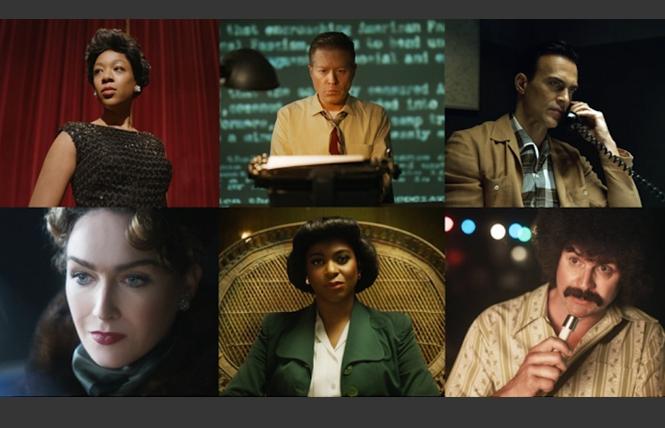 In honor of LGBTQ History month, HBO Max has produced a new limited four-episode docudrama series called Equal about the trailblazers and unsung heroes who fought for queer justice and equality in the pre-Stonewall era.

Not surprisingly, San Francisco plays a major role in these stories. One wants to thunderously applaud this well-intentioned endeavor, but only a smattering of hand claps can be elicited for its abbreviated fragmentary format, with style and ambiance overwhelming substance.

Episode 1, entitled "Birth of a Movement," focuses on the founding of LA's Mattachine Society by Harry Hay and Dale Jennings and SF's Daughters of Bilitis, created by Del Martin and the recently deceased Phyllis Lyon. Both organizations were formed as secret organizations acting as support systems for gays and lesbians plus alternative means to socialize. Bars were often raided by the police, leading to arrest and being fired after arrestee's names were published in local newspapers. They became more politically focused trying to foster change incrementally, politely, and apologetically to the powers-that-be.

Episode 2, bookended by the 1966 Compton Cafeteria riot in San Francisco's Tenderloin, pays tribute to transgender pioneers. Jack Starr (aka Jacques Moret) was a local outcast in fin-de-siecle Montana in and out of jail for wearing men's clothes. Lucy Hicks Anderson, a black chef, socialite, and Prohibition entrepreneur, owner of a brothel in Oxnard, CA, was outed and arrested during a medical exam for a syphilis outbreak at her business. Christine Jorgensen, the first transsexual (the term used in the 1950s/1960s) luminary who became a nightclub entertainer, author, and lecturer, used her fame to inform the public on trans issues.

"Black is Beautiful, Gay is Good" comprises episode 3, with a focus on the contributions from the Black community during the Civil Rights Movement. Playwright Lorraine Hansberry (A Raisin in the Sun), activist Bayard Rustin (associate of Martin Luther King who organized the 1963 March on Washington), and José Sarria are included. The San Francisco cabaret Black Cat Cafe entertainer was the first gay person to run for elected office as Supervisor 16 years before Harvey Milk. 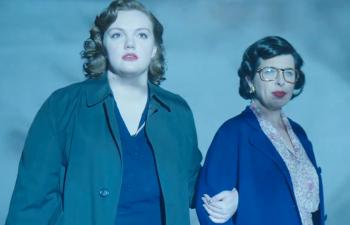 The final well-balanced installment details the Stonewall rebellion as less a riot than civil disobedience through the lens of activists Sylvia Rivera, Marsha P. Johnson, Craig Rodwell, and Mark Segal, leading to the formation of political groups such as the Gay Liberation Front and Gay Activist Alliance, and culminating in the birth of the contemporary queer community in the first nationwide parades in 1970.

What we are presented with in Equal are mini-biographies of queer movers and shakers, a Cliff Notes condensed summary of the pre-Stonewall past that provides little context and nuance through questionable imagined re-creations.

While it is a welcome gesture on the part of the producers (including actor Jim Parsons and director Greg Berlanti) to hire openly LGBTQ actors to play these roles, they are mostly cameo appearances that give little insight to understanding these famous pioneers and at worst are distractions from seeing and hearing the bonafide more absorbing entities in video or audio clips.

For example, we watch a fascinating interview clip of Phyllis Lyon recounting encountering Del Martin for the first time, which then jarringly morphs into the image of actress Heather Matarazzo playing Lyon, finishing the speech. Why would one want to hear a rather blasé theatrical rendition of Lyon when we can observe the real Lyon? Do we need Jamie Clayton imitating Christine Jorgensen when there are a plethora of television interviews she gave on a wide variety of trans topics? This juxtaposition occurs throughout the series increasingly to annoying effect.

The one time these artificial re-enactments work is in episode 2 featuring Starr and Anderson. Since the only available source materials are newspaper articles, we have no audiovisual cues about them, thus rendering reconstructed scenes some plausibility.

Also, because there was little media content available concerning the Compton Cafeteria Riots —then not considered newsworthy— we meet an invented composite character, Alexis, who represents all the angry trans people fed up with police harassment at their favorite meeting place. These scenes genuinely convey the desperation of the period. 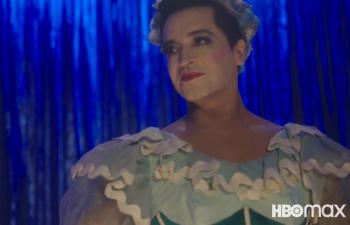 Finally, we loved Billy Porter's performance as emcee Pray Tell in F/X's Pose series, but as narrator, Porter has transposed that persona into Equal, bringing along the character's stridency and brashness, a snarky vibe that doesn't fit that era or the content.

At times, Porter is shouting at viewers so as not to miss an obvious point, which unintentionally insults their intelligence as if they weren't capable of comprehending the import of the issues at hand. A calculated gambit to frame the content as fashionably and politically relevant for 2020, Porter's narration serves more as advocacy, and entreats audiences to "Join the revolution!"

The truth is that anyone over 40 will be familiar with almost all the people and events depicted in Equal, probably from viewing superior, more insightful documentaries on queer history, such as Before Stonewall, Word is Out, and Stonewall Uprising.

We hasten to add there are superb full length biodocumentaries on all the visionaries discussed in this series, including a new film on Jose Sarria, Nelly Queen, that Frameline 44 rejected (but shown at OutFest) and opted instead for this inferior eight-minute portrayal in Equal. On September 9 Frameline announced, perhaps in an act of contrition, that Nelly Queen would be screened at 2021's festival.

With its use of eye-catching graphics, the lightning-fast pacing of the assembled historical information, and the anachronistic use of 21st-century lingo and social media terminology, Equal seems geared to millennials with little to no knowledge of LGBTQ history. We can commend the producers for such a laudable educatory goal, though its truncated, celebrity-oriented presentation will have limited appeal to more astute seasoned viewers.