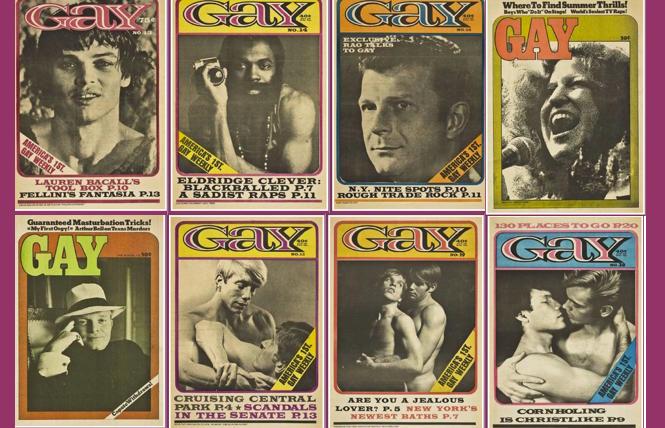 Two years after The Advocate began publishing, and two years before the Bay Area Reporter premiered, the New York City-based GAY covered politics, arts, civil rights and sexuality with a bold and groovy style. The complete issue collection from 1969 to 1974 is downloadable online.

National politics, photo essays of the 1972 Christopher Street Liberation Day march, multiple reviews of Bette Midler albums and concerts, plus reviews of gay-themed plays are among the many historic features (including a scathing takedown of Mart Crowley's then-controversial play, The Boys in the Band.).

GAY's editors were Lige Clark and Jack Nichols, with Jim Buckley and (the mostly straight) Screw magazine's Al Goldstein as publishers. While The Advocate preceded GAY in its premiere, it was then published twice a month, with GAY being, for a time, the first gay weekly (it changed to biweekly and later monthly before ceasing publication in 1974). 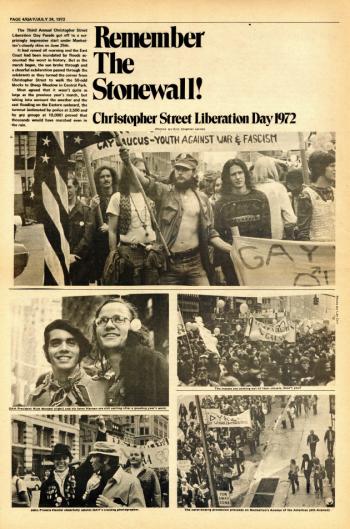 Most issues include images of male (and female) nudity, so be warned. This was a time of sexual revolution, and that included debating topics relative to the growing out gay and lesbian population.

Scanned and uploaded (with assistants) by gay historian J.D. Doyle, his website, http://www.houstonlgbthistory.org/index.html includes a vast array of mostly Houston-based LGBT historical documents, periodicals and photos, and numerous drag and music acts featured in our own BARchive columns written by Michael Flanagan.

Whether you lived through this fascinating era, or have an interest in LGBT history, GAY is worth perusing.

Start your vintage reading at http://www.houstonlgbthistory.org/GAY.html