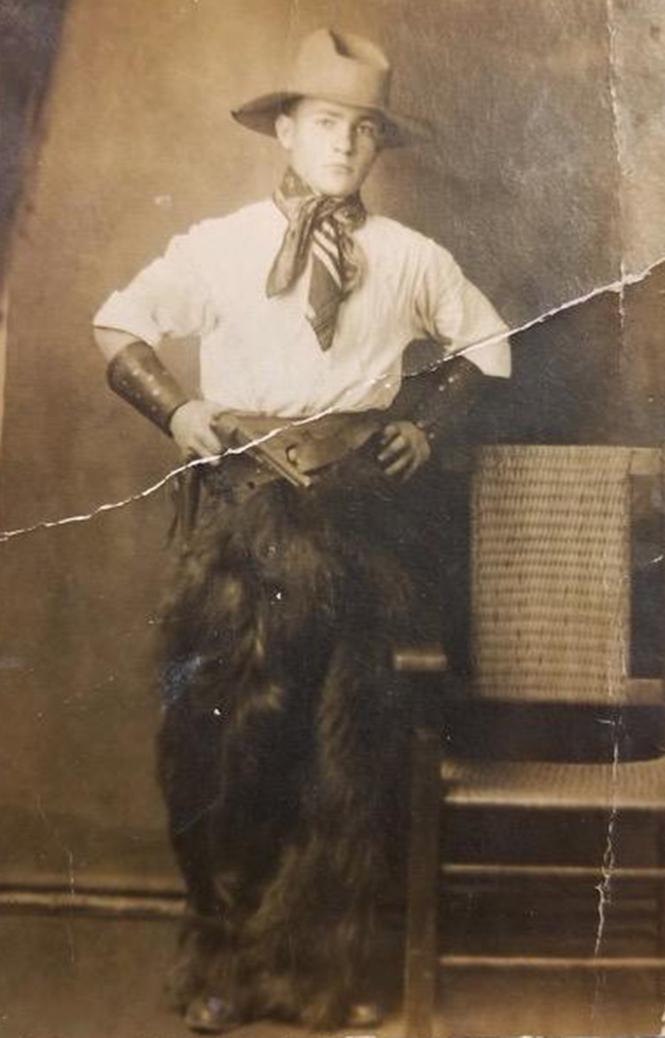 Out There is visiting Santa Fe, New Mexico, this week, on a sweet little press tour, and we'll fill you in on our travels next week. Surprisingly, the pre-statehood New Mexico Territories figure in our own family back-story, as related in this oral history provided by our cousin Danny Friedman.

"Here's what I 'know' about our paternal grandparents' histories. I put 'know' in quotation marks because I learned all of this from my father, so it's oral history without any documentation, but, then again, so is most history.

"Isidore and Sophie did not meet in the Old Country, but in New York City. She was from Kiev, Ukraine, and he was from Bialystok, Poland. Sophie's father was a rabbi, and both her parents died from an epidemic that swept through Kiev when she was 12. My father didn't know what the disease was. The following year, when she was 13, she left for America on her own. She got work in the garment industry in NYC, and worked as a seamstress most of her life. Her original surname was Bitchov, but upon learning what 'bitch' meant in English, she changed it.

"Meanwhile, in Bialystok, Poland, then an industrial city which was about 60% Jewish before the Holocaust, Isidore (Izzy as he was known to friends and family) became involved in radical politics at the age of 13 after his best friend was shot dead next to him during a pogrom. He joined the Young Communist League after that, since the communists were the only ones, at that point, who were arming to fight back against the anti-Semites [in the early years of the 20th century. In the ensuing century, not so much. — OT].

"At 17, Izzy fled the Russian Empire to avoid serving in the Czarist Army. The draft was for 12 years, and Jews rarely came out of the army alive. He was smuggled out through Poland and into Germany in the bottom of a hay wagon. Once in Germany, in exchange for passage to America, Izzy agreed to work for two years on a ranch in New Mexico — that is, he was an indentured servant, working as a cowboy, for two years.

"My father says it was a lonesome time for Izzy. While he could speak Yiddish, Russian and German, he had not yet mastered English, so the only one he could talk to, he said, was his horse. He got one day off work each month and would travel to a nearby town where there was a Jewish tailor who spoke Yiddish. (The photo is of our Grandpa in his cowboy outfit.)

"Once he had done his two years on the ranch, Izzy moved to New York and became a professional boxer. He fought for (and lost) the welterweight championship of the world. Welterweight is between 140-147 lbs. He was only 5'3", but I remember him being powerfully built. Sophie (who was 4'11'') and he met when he was a fighter. After he lost the championship, she made him quit boxing as a condition of their getting married, according to my father. He then worked for some years as a baker before becoming a housepainter. I don't know why he switched trades. He was a militant with the International Union of Painters and Allied Trades all his life, as well as an active member of the Workman's Circle, a Yiddish-language cultural and mutual aid organization long affiliated with the Communist Party.

"As for the name Friedman: My father says that his father's original surname was Flectich. When he was going through immigration at Ellis Island (or? not sure where), the agent asked him his name. Since he didn't really understand English at that point, he said that arriving in America made him 'a free man,' which immigration wrote down as Friedman. It's probably too corny a story to be true, but I loved it as a kid. As we know, Friedman is a common Ashkenazi name."

OT loves this story (and Grandpa Izzy's cowboy duds) because it "rhymes" with our own story of coming out West. When we were young, we were radicalized when our own best friend died of AIDS during the early days of the epidemic, when straight society was largely indifferent to the fate of homosexuals, Haitians and IV drug-users who had contracted the disease. In that respect, his death was analogous to Izzy's best friend's murder in a pogrom. OT was motivated, like our granddad, to "light out for the territories" when life in the Old Country (or in our case, the East Coast) had become unbearable.

Much happier news next week, when we catch up with New Mexico today.