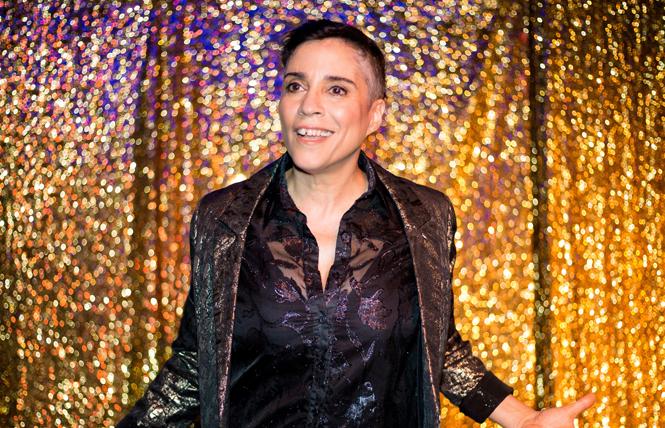 Last week Out There was lucky enough to catch two major figures from contemporary LGBT arts & culture live in performance, and to learn what they're up to these days. Lesbian comic nonpareil Marga Gomez brought her latest, and self-described last, solo show to The Marsh Berkeley, and transgenre vocal artist Justin Vivian Bond headlined the GLBT Historical Society's annual Gala, unfolding in the posh setting of the War Memorial Building's Green Room.
Gomez's "Latin Standards" tells the true story of her relationship with her father, the Cuban-American showman, comedian, producer, entrepreneur, and composer Willy Chevalier. She uses the framing device of a "final farewell concert" to offer a few of his popular ballads — not sung, but hilariously expounded upon — and give the back-story of life with her performer parents in 1960s Manhattan. Though he was clearly a character, Gomez portrays her father with tenderness, empathy and nuance.
Marga being Marga, we also get to hear dishy stories from her adult life, from dealing with a terminally blonde girlfriend to putting on a weekly comedy show at the late, lamented gay Latino club Esta Noche in the years before it succumbed to the rapidly gentrifying Mission District. In these tales of show biz and the "creative addiction" they both share, Gomez proves that she's still her father's daughter, as much of a "showman" as he ever was. Directed by David Schweizer, "Latin Standards" plays The Marsh Berkeley through Nov. 17. Tickets: www.themarsh.org.
Mx Bond does not possess the most dulcet set of pipes, but they (preferred pronoun) can sure sell a song! For their set at the Historical Society shindig, Bond looked elegant and soignee in a sparkly gold wrap and long blonde fall. Their patter and songs, accompanied by pianist David Sylkowski, were exactly right for their knowing fans: cabaret songbook, world-weary reflection, and early Bowie nostalgia.
The Gala honored community members who have helped make gay history. Bob Ross Foundation president Thomas Horn was given the Willie Walker Award; the San Francisco Gay Men's Chorus the History Makers Award; archivist Lisbet Tellefsen the Clio Award; and the late pioneering LGBTQ studies and human sexuality scholar Dr. John Paul De Cecco the honor of having the Historical Society's Archives named after him. Executive director Terry Beswick and Board Chair Tina Valentin Aguirre presided over it all and helped make the case for the GLBT Historical Society's continuing mission of preserving and presenting our history through archives and the museum. We feel historical already.