Lew the Jew & his rebel friends 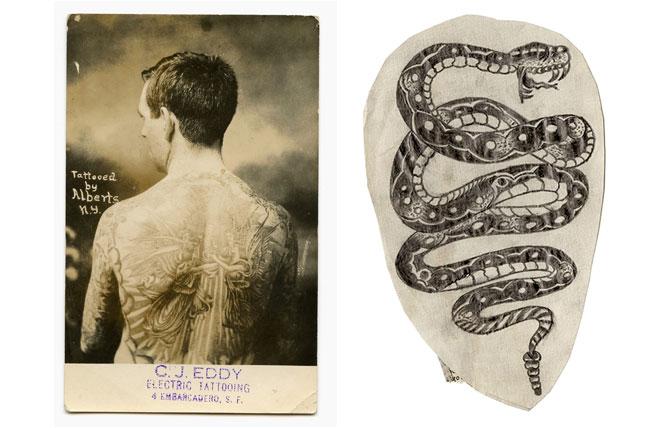 Any show that has the balls to call itself "Lew the Jew" has a leg up on the competition in my book. Actually, the official title of the Contemporary Jewish Museum's new original show is "Lew the Jew and His Circle: Origins of American Tattoo," but who's quibbling? Largely drawn from the collection of local tattoo maestro Don Ed Hardy, this slight exhibition will have its greatest appeal among aficionados, the already converted and rebels-in-waiting. That said, it provides a colorful slice of underground American culture during the early 20th century, and a glimpse of an urban industry that began with a tight-knit community consisting of a few hundred hardscrabble artists. Currently they number in the thousands, with hundreds of thousands of customers generated by the Internet and cheeky, pop-culture trendsetters like Angelina Jolie, Cher, and other self-styled outlaws.

Rarely has light been shed on tattooing in a museum; it's an especially complicated topic for a Jewish institution, given that passages in the Hebrew Bible appear to forbid the practice of marking the skin, making it unacceptable for Jews. There's also the bitter, still potent memory of the barbaric Nazi policy of tattooing numbers on the forearms of concentration camp prisoners. Still, tattooing has become commonplace, and some descendants of Holocaust survivors have even inked their wrists in an act of solidarity with their relatives and the spirit of those lost.

The exhibition's star attraction, "Lew the Jew" Alberts, ne Albert Morton Kurzman (a birth name that, let's face it, is not as catchy a moniker), was a pioneer in the field. The son of Jewish immigrants who settled in New York, he studied mechanical drawing, specializing in wallpaper design, at a Hebrew trade school, and learned the dark art as a solider fighting in the Spanish-American War. He came back to establish a thriving shop out of the Bowery amidst the top purveyors in the business. Members of the military were regular consumers, arriving each week flush from payday to get the latest body art. It could cost them $3 for small images, and up to $100 for major chest and back work, a procedure reserved only for the stout-hearted and thick-skinned.

An entrepreneurial innovator, Alberts is credited with constructing one of the first electric tattoo machines, and originating the tattoo "flash" - sample design sheets available to prospective customers, printed and marketed to fellow tattooists. A selection of his detailed, small-scale, pencil-on-paper artworks featuring grinning animal faces, clowns, roses, anchors, coats of arms, a horned devil, and of course, a bevy of alluring women, naked and otherwise, is on view.

Alberts' Lower East Side coteries, a cast of characters with unconventional resumes, flesh out the exhibition with contributions of their own. The best back-story belongs to Millie (Mildred) Hull. A tattooed lady and the foremost female tattooist in the land, she dropped out of school and ran away to the circus at 13, spending the bulk of her career as an exotic dancer, the secretarial pool not being an appropriate fit for a woman of her unusual talents. A color newsreel on Hull from 1937 playing nearby gives a sense of what she was like. Charlie Wagner, a Slovakian émigré who worked with Alberts on and off over the years, gained notoriety for tattooing a trio of Jewish boys whose parents reported him to the police. In 1904, we're told, he filed for the second patent on an electric tattoo machine, and before he was wiped out by the Great Depression, he was touted as the King of the Bowery tattoo crowd. Best-known for his work on circus sideshow performers, he's shown in photographs tending to his clients, and promoting back and front views of his art-covered body, a kind a sandwich board without the board or the sandwich.

Bay Area tattooist "Brooklyn Joe" Lieber, so named even though he lived in Alameda, corresponded with Alberts and helped popularize depictions of a triumvirate of panicked Pharaoh's horses who drowned while pursuing the Israelites out of Egypt in the Exodus story. In a 1922 picture, the bespectacled Lieber plies his trade looking more like the town postman in a cap, vest and bowtie. A large black & white photograph of one of his customers, a brawny circus strongman, tattooed head-to-toe and naked save for his socks and wingtips, attests as much to Lieber's patience as the other fellow's threshold for pain. Bear in mind, the practice, which now attracts sophisticated professionals with Fine Arts degrees, was not nearly as safe, sterile or respectable as it is today.

A portion of a wall is devoted to the good old bad days of "Pin-ups," which were published by men for male consumption as early as the 1890s, and aimed at the libidos of lonely sailors and soldiers. The politics surrounding pin-ups being touchy, the text accompanying this section ranks as some of the most tactful ever written. Still, there they are, in all their ridiculous girlie glory and exaggerated curves, so silly and innocent by modern standards they don't rise to the level of offensive. Lieber's color "flash" sheets offer a rambunctious procession of buxom, leggy, male fantasies with swords and without, frolicking in martini glasses, scantily clad three-musketeer gear, and lusty, top-heavy mermaids beached for male pleasure. You name it, honey, you got it.