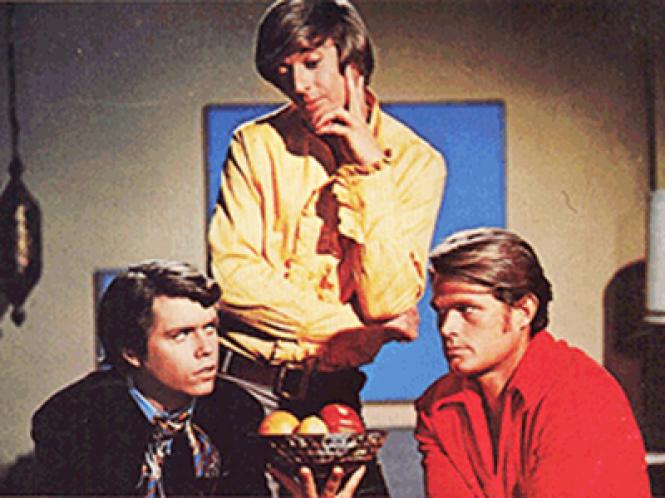 When you consider entertainers associated with gay San Francisco you could be excused for thinking there are two tiers of performers. Those like Phyllis Diller, Sylvester and Johnny Mathis were discovered here and went on to international fame, while others were famous in the city but little known elsewhere.

However, there is a third kind of performer who is somewhat well known by the world at large, but held a special place in the heart of San Franciscans. The actor, comic and writer Michael Greer was one of these performers.

San Francisco wasn't the first stop in Greer's search for fame. Originally from Illinois, in the 1960s he moved to New York, where in a talent competition at the Coronet Lounge he came in third behind Barbara Streisand and Tiny Tim.

In 1965 he was off to L.A., where he formed the troupe "Jack and the Giants" with Jim Bailey. Bailey's impersonation of Judy Garland got the attention of Garland herself, who attended the show five times. Buzz from her attendance resulted in a 16-month engagement of sold out shows. Since most performances in gay clubs were lip-synched at the time, Greer liked to say said that he brought the Talkies to the gay world.

In 1967 Greer moved to San Francisco and began performing at the Purple Onion Two (435 Broadway) in "Discoveries '67." It was here that he introduced a character he performed throughout his career - the Mona Lisa.

"The way I play her," he told John Stanley in the Examiner, "she's like everyone's favorite aunt. You know, the one everyone is afraid to invite to the party because she always says the wrong thing. Still, everyone loves her."

It didn't hurt Greer's showbiz buzz that he was involved in a scandal with A-list dancers. On July 12, 1967, under the headline "Dancers' Hippie Spree" it was reported Dame Margot Fonteyn and Rudolph Nureyev had been arrested at a wild party and booked for "being in a place where marijuana was kept" after trying to escape to the rooftops of adjacent apartments, according to the Chronicle.

The party was at Greer's apartment (42 Belvedere), although Greer was booked under his birth name (James Malley). Aside from Greer and the dancers, a performer from the Gilded Cage was arrested as well, making the party a pretty gay affair.

All charges were dropped, but later that month Chronicle entertainment writer John Wasserman referred to Greer as being part of the "Fontaine (sic)-Nureyev Rooftop Ballet Company." If your party got the attention of police in the middle of The Summer of Love, it must have been a pretty good party indeed.

Chronicle writer Wasserman labeled Greer, "someone to watch" and indeed people were watching. Sal Mineo caught Greer's performance and offered him the role of Queenie in John Herbert's Fortune and Men's Eyes.

The jailhouse drama (premiered in New York in 1967 to great controversy) opened its West Coast premiere January 9, 1969 at the Coronet Theater (366 North La Cienega) in Los Angeles. Greer went on to perform in New York and San Francisco casts of Fortune and was cast in the film adaptation as well. Performing as Queenie, he caught the eye of director Bruce Kessler, who cast him as Malcolm in the film The Gay Deceivers.

To say Greer met with positive film reviews would be something of an understatement. In the Chronicle review of The Gay Deceivers Wasserman reported, "It is not quite accurate to say that he steals it, because the nature of the role provided the potential and director Bruce Kessler let him have his head. But it is Greer's picture - whether you are straight, gay or AC-DC."

The Gay Deceivers was picketed in San Francisco due to the camp and effeminate nature of the gay characters in the film. But when referring to the role in The Celluloid Closet Vito Russo said:

"The saving grace of the film is Michael Greer as Malcolm, the landlord. Greer not only wrote his own role as a flamboyant queen (complete with Bette Davis imitations) but apparently rewrote the screenplay in places, making it 'funnier and less homophobic than was intended' wherever he could."

Greer's openness about his sexuality had a direct impact on his career. In 1980, The Advocate subtitled an article, "What has coming out cost his career?" The actor Michael Kearns wrote an obituary entitled "The Legendary Michael Greer" for gaytoday.com in 2002 discussing this:
Michael Greer in The Gay Deceivers with Sebastian Brook.

"I remember him telling me that his management wanted him to get married so they could make more money off of him. 'I was gay at the wrong time,' he joked. And that's the truth. Because Greer refused to play the game, his film career was tragically truncated."

Though Greer's career was impacted, he did appear in The Rose (1979) and worked on television and as a voice actor. His work as a stand-up work continued as well. Though he moved to Southern California in the early '70s, he performed at the *PS (1121 Polk), Gold Street (56 Gold), Chez Jacques (1390 California), Hotel York (940 Sutter) and Chaps (1225 Folsom) and was emcee for the Cabaret Gold Awards in 1980 at Bimbos and for Men Behind Bars in 1994 (he performed in San Francisco practically every year till his death).

In an interview with QQ Magazine (Nov/Dec 1971) he said, "If I could be a combination of Cary Grant, Alain Delon and Michael Greer and have everything else going for me, I would like to top it all by saying that I had been born in San Francisco... I've worked straight clubs and gay clubs there, and clubs that weren't sure, and the people just dug me and threw back all the love I thrown out to them; I've got fan clubs there and even good press."

It appears the feeling was mutual. Every time he performed in town, Sweet Lips would mention it in his column (often with an accompanying picture). A heartfelt obituary written by Bob Ross appeared in the B.A.R. when he died of lung cancer in 2002. He was a true entertainer and a well-loved San Franciscan at heart.

The bars that brought us the B.A.R. - from the Tavern Guild to the Bay Area Reporter
Sign up!