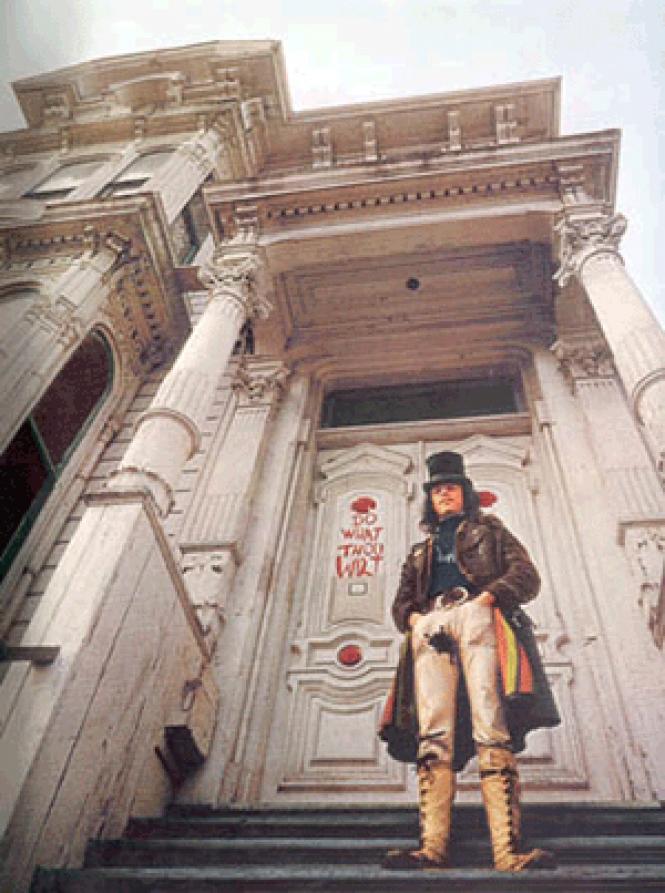 Bobby Beausoleil in front of 1198 Fulton Street (1967) with the Aleister Crowley phrase 'Do What Thou Wilt' on the door  (Source:Courtesy of Esquire UK; photographer unknown)

Earlier this year, while doing research for another article, I found the term "witches Christmas" for Halloween. It first appeared on a calendar for the S.I.R. center in October 1967 and was taken as the name of an annual party for the Warlocks Motorcycle Club. The term made me wonder about the history of pagan and occult interests among LGBT people in San Francisco. This is the perfect time of year to explore that topic.

At his talk "Do What Thou Wilt: Kenneth Anger and the Dawn of Aquarius," held at the GLBT Historical Museum in August, historian Joey Cain handed out cards with Aleister Crowley's work Liber Oz. One line in that work is, "Man has the right to love as he will." As part of the doctrine of Crowley's Thelemite religion, it declares the equality of all forms of love, and it was written in 1941.

Crowley is central to many schools of occult thought. In "The Confessions of Aleister Crowley," the bisexual mage writes he visited San Francisco twice, in 1901 and 1916. In 1901 he found the city to be "a madhouse of frenzied money-making and frenzied pleasure-seeking" (an accomplishment, considering he was called the wickedest man in the world).

The gay bohemian poets of the San Francisco Renaissance worked with the magic of words. Robert Duncan was raised by Theosophists in Alameda. In December 1964 filmmaker Kenneth Anger left a trunk at Duncan and Jess' house at 3267 20th Street which contained items belonging to Crowley. In Robert Duncan, The Ambassador From Venus, Lisa Jarnot relates that after having Anger remove the trunk:

"In the following days, Duncan poured through his books on magic and spells, carrying out various makeshift rituals to evict the unwelcome spirits."

Poet Jack Spicer was likewise interested in the occult. Lewis Ellingham and Kevin Killian relate in the Spicer biography "Poet Be Like God" that he was interested in Tarot and Crowley and planned a book on Tarot. In 1957 Spicer conducted a workshop called "Poetry as Magic" at the Public Library, which included (among others) Spicer, Duncan and the poet Helen Ada, whose work often involved the supernatural.

Anger lived in San Francisco from 1964 to 1967. On November 27, 1964 he premiered "Inauguration of the Pleasure Dome" at The Movie on 1034 Kearny Street (Anger lived above the theater at 1032 ½ Kearny). The Chronicle reported that it was the first showing of the film in America. Anger told the paper the film "is based on a cult started by Aleister Crowley."

By 1967 Anger was living at the William Westerfeld House (1198 Fulton). On February 24 he attended the Digger's "Invisible Circus" at Glide Memorial Church. There he met Bobby Beausoleil, who would go on to infamy with the Manson Family.

Anger invited Beausoleil to move into the Fulton Street house and to personify Lucifer (which Anger saw as an angel of light) in "Lucifer Rising." Some material in the film comes from a live concert, "Equinox of the Gods" (named from a book by Crowley), which happened at the Straight Theater (1702 Haight) on September 21, 1967. Events surrounding the concert resulted in both Anger and Beausoleil leaving town.

Another star of "Lucifer Rising" was Anton LaVey, who was well-known in San Francisco in the '60s, even before founding the Church of Satan in 1966. Featured in Herb Caen's column as the owner of a lion named Togare, LaVey held a series of Friday night lectures on the occult in the early '60s at his Black Victorian (6114 California St.), where Anger was a frequent guest.

LeVayan Satanism is LGBT-friendly, as the will of the individual is paramount (he referred to his form of Satanism as "Ayn Rand's philosophy with ceremony and ritual added"). His The Satanic Bible (first published in 1969) states:

"Satanism condones any type of sexual activity which properly satisfies your individual desires - be it heterosexual, homosexual, bisexual or even asexual, if you choose."

This philosophy is also made clear in the documentary "Satanis" (1970), in which he performs a ritual of sexual attraction between gay men.

The 1970s saw an explosion of interest in Neopaganism, witchcraft and the occult. Jack Fritscher published "Popular Witchcraft, Straight from the Witches Mouth" in 1972.

In 1976, Arthur Evans gave a series of "faeries" lectures, which were published as "Witchcraft and the Gay Counterculture" in 1978.

Starhawk, a founder of the Reclaiming tradition of Neopaganism, wrote the Chronicle in 1976 responding to an article entitled "Alarming Revival of Witchcraft." She pointed out in her letter, "Witchcraft has no connection with diabolism, Satanism or the worship of the forces of evil in any form. We practice the religion of the Goddess, the loving Mother of the Universe."

Z. Budapest, who would hex the LaRouche proposition in 1986, fought for her right to practice Wiccan religion in the '70s.

The Radical Faeries and the Sisters of Perpetual Indulgence, with their versions of Neopaganism, were founded in 1979.

Many of these traditions remain with us to the present. Although some occult bookstores like Fields, which was at 1419 Polk Street for 80 years, moved online (www.fieldsbooks.com) others, like Enchantations in Campbell (2160 Winchester) remain open and LGBT-friendly today.

The Reclaiming tradition (www.reclaiming.org) holds its annual Spiral Dance for Samhain every year at this time. Ghost tours like the Haunted Haight Walking Tour (www.HauntedHaight.com) include sights like Trax Bar, which tour guide Tommy Netzband tells me was haunted by a ghost from the 1940s.

It may seem odd that our community found acceptance in occult philosophy while religions which profess to follow a god of love object to LGBT people both legally and spiritually. But perhaps Halloween is a good time of year to remember: our daily existential horror often trumps gothic horror.

Tripping through history: 'The Letters of Thom Gunn' as a roadmap to San Francisco's past
Sign up!