From 'Beach' to Memorial: Castro Site Evolves Over Decades 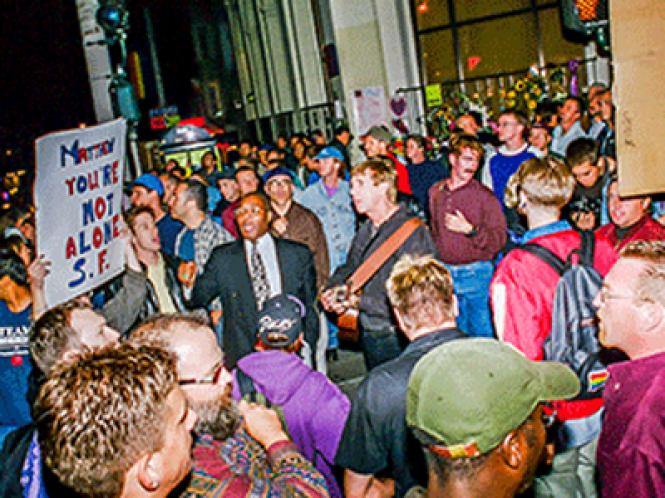 The corner of 18th and Castro streets - arguably the center of the gay universe - was known in the 1970s and 1980s as a sunny social spot for gay men who had escaped to San Francisco from other parts of the country. Since then, it's become known as a place to memorialize people who've died.

The evolution of Hibernia Beach, named after the Hibernia Bank branch that stood at the intersection for years, follows the migration of the gay men who flocked to the neighborhood to take advantage of opportunities for liberation through the early 1980s, when the AIDS epidemic started. The building now houses a Bank of America branch, and the northern wall of the building is where people regularly post tributes to their friends.

Asked about Hibernia Beach, Cleve Jones, 62, who first moved to the Castro in the mid-1970s, said, "I'm pretty sure I coined that phrase. Back in the day, on any sunny afternoon, that area was just packed with shirtless men."

Asked when he first noticed it as a gathering spot, he quipped, "Please, I don't know. It's a long fucking time ago."

However, Jones, who was a confidante of slain gay icon Harvey Milk and went on to found the AIDS memorial quilt and other projects, does remember walking by and seeing men "putting suntan lotion on each other," which he thought was "hilarious" given that it was "right in the heart" of an urban neighborhood.

"Long before climate change made us a tropical place, it was a cold and damp town, so when the sun did come out, within moments of the sun emerging through the fog, the boys would just take off their shirts," Jones said.

"Almost any time the sun came out, there would be almost a carnival atmosphere there, especially on weekends," he said, even though "one could not smoke pot as openly as we do these days."

People still had radios then, and they'd put out speakers on their fire escapes, or there would be music in the streets from people's boom boxes.

"There would be people almost naked, as close to naked as you could get," Jones said.

There was also "a lot of political stuff," he said.

"We were always registering voters on the corner" and they'd set up ironing boards to set the registration forms on, Jones said.

"It was a great way to meet guys, as well as to be part of the democratic process," he noted.

Ron Williams, 73, who first moved to the Castro in 1971, recalled that the intersection was also a place where people could catch the bus, as it still is now.

On the Castro side, "men used to line up there in the afternoon sun. It was kind of a posing and pick up stop. It was also a bus stop for the 8 Market," Williams said.

If anyone asked men what they were doing there, they could say they were "waiting for the bus," he said. "... They couldn't be accused of loitering."

There was a fairly standard uniform for the neighborhood in those days, as many would probably argue there still is today.

"In the 1970s there was a lot of clone-type gay men who almost wore the same thing," mostly Levi's and T-shirts, Williams said.

But despite the spot's popularity, Williams, who now lives in Palm Springs, said it wasn't a place he frequented.

"I don't think I was the type that would just hang out like that," Williams said.

Mark Abramson, 64, moved to San Francisco in 1975. Within a few years, he said, "Any day there was any sun at all, there were guys standing [at 18th and Castro] with their shirts off, cruising, posing, smoking cigarettes, and smoking joints. ... People were pretty much all the way around the corner, standing up against the building."

But that's not all that would happen at Hibernia Beach. Abramson recalled seeing actress Shirley MacLaine helping to judge a dog show there one year.

"Eighteenth and Castro was the center of the gay universe," Abramson said. "It was as famous as Haight Ashbury, or Christopher Street in New York. Everybody knew it, so when everybody came to town, they wanted to have their picture taken at the corner of 18th and Castro."

"It's so different now," Abramson said of the neighborhood. In the 1970s and early 1980s, "You never saw a stroller. You never saw a child. You hardly ever saw a woman in the Castro. It was all men, and pretty much mostly younger men."

Although "there was some diversity" within the gay crowd, there was "a preponderance of white gay men in their 20s, which was what I was," he said.

Eventually, the intersection started to emerge as a spot for memorials.

Williams first noticed people posting things after Milk, who was a city supervisor, was assassinated along with Mayor George Moscone by disgruntled ex-supervisor Dan White in November 1978.

But Williams recalled the memorials became more popular "when people started dying of AIDS. That's when you really started to see stuff up there."

Tributes would often include a photo and the obituary that was published in the Bay Area Reporter, or a candle and some flowers, Williams said.

"The bank would usually leave it up there for a day or so, but then it would get cleaned up," he said. But after some time, "I think the bank just accepted it as part of the community and just let stuff stay up there."

Williams also remembered groups like ACT UP and Queer Nation posting information at the site.

"People would always go up there and read what was going on," he said, particularly if someone had died or there was an event coming up. "Sometimes this was the first that they had heard about it. It was kind of an instant place for disseminating information about the neighborhood or an event."

Abramson likened 18th and Castro in those days to Lotta's Fountain on Market Street, which served as a gathering spot after the 1906 earthquake.

"I think during the AIDS years there were constantly memorials up there to people who died of AIDS. You'd walk by there and see the pictures and say, 'Oh, I remember him.' You didn't necessarily remember everybody's names, but you'd see the faces of people you knew who'd just died," he said.

The wall memorials "were a little more personal" than the obituaries that ran in the B.A.R.

People would post photos of their friends that showed them "when they were healthy and having fun, and there were a lot of personal tributes. People would write notes," Abramson said.

One of the most popular memorials Williams remembers was the tribute to Princess Diana after she was killed in a car crash in Paris in 1997. Diana was an icon in the LGBT community because of her AIDS advocacy. The temporary shrine included a large, colorful picture of her that someone drew on the sidewalk.

"People wouldn't even walk over that drawing, that's how sacred" it was, he said.

More recently, in June, the site was covered with candles, flowers, and photos to honor the victims of the Pulse nightclub shooting, after Omar Mateen, 29, fatally shot 49 people and wounded 53 others at the gay bar in Orlando, Florida.

Like the B.A.R., which has seen a drop in obituaries since AIDS deaths have slowed, there are also fewer memorials at the bank.

"Now when I walk to that corner and I have to wait at the light, I always glance over," Abramson said recently. "Yesterday on my way to the gym I noticed there was nothing up there. I thought, 'How nice, there's nobody I know, or nobody local has lost anyone recently.' "