Pre-Stonewall, There Was Compton's in San Francisco 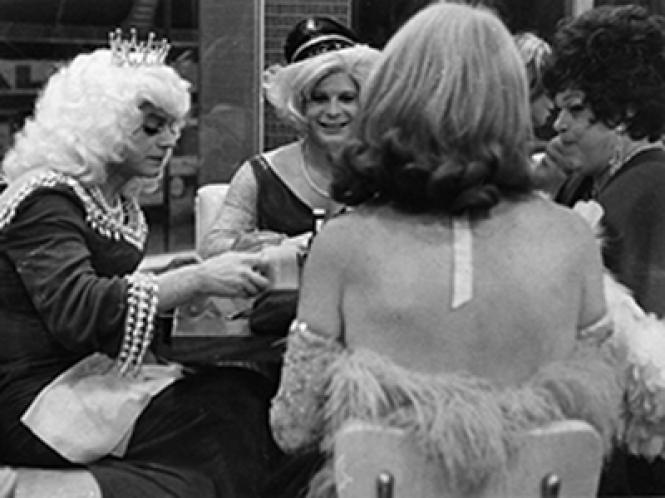 On August 4, Felicia Elizondo led a talk, "Compton's Riot: Cruising the Tenderloin in the 1960s" at the GLBT Historical Museum. It made me realize that when we discuss Compton's cafeteria (101 Taylor) it is generally compared with Stonewall.

Perhaps it's because Stonewall spawned the Pride parade, but it takes this event out of its Bay Area context. What happened at the Tenderloin cafeteria on an unknown date in August 1966 makes more sense when we look at events that led up to it.

The incident that first shapes the background for Compton's takes place across county lines. Hazel's Inn in Sharp Park was raided in the early morning hours of February 20, 1956. Sharp Park was in San Mateo and would be incorporated into Pacifica in 1957. Sheriff Earl Whitmore told the San Mateo Times, "The purpose of the raid was to let it be known that we are not going to tolerate gatherings of homosexuals in this county."

Ninety people (including three minors) were arrested, the majority from San Francisco. Most of the arrests were for "lewd vagrancy."

Risa Goluboff points out in her new book "Vagrant Nation" that vagrancy charges were used against African-Americans, women, poor people and gays to stigmatize them as people who threatened public order and safety. The charge had the added benefit of being easier to enforce than sex-related charges like sodomy, and was much used by law enforcement in the era of Compton's.

The juveniles who were arrested were sent to juvenile hall. Hazel's was declared off limits to military personnel, and owner Hazel Nickola lost her liquor license. Names of the people from San Mateo County (including ages and occupations) were listed in the Times.

The message was clear: Queers were unwelcome; they contributed to the delinquency of minors and if you consorted with them you could lose your livelihood. As the raid occurred after midnight on a Monday morning, it assured those arrested would be late for work. If you weren't a vagrant before you were arrested, the police wanted to be certain you became one.

On August 14, 1961, another raid occurred that set the stage for the attitudes in the city. The Tay-Bush Inn was an after-hours restaurant only six blocks from Compton's, at 900 Bush Street. The headline blared, "Big Sex Raid - Cops Arrest 103."

Again, the raid occurred in the early hours of a Monday morning to guarantee maximum exposure for the people who were arrested. But this raid happened the year after the "Gayola" police payoff cases, and the press was a bit more sympathetic toward those arrested.

The San Francisco Chronicle interviewed Bob Johnson, the owner of the club. Johnson seemed more concerned about his patrons than himself.

"They were booked on phony charges," he said. "And the police were real sassy toward them - real rude."

By September 6, 1961, when it was reported that Bob Johnson was given a $500 fine, the Tay-Bush was referred to as "now-defunct," so the threat to close businesses was apparent. The men who were arrested on lewd conduct had their names and addresses listed in the Chronicle. The judge told them, "We don't need people like you in San Francisco. Go back where you came from."

Things started heating up in the Tenderloin two years before the riot at Compton's. In August, 1964 the Citizen News reported a sit-in was probable at the Plush Doggy (904 Market).

"The management has taken a jaundiced view of customers who dawdle overly long with a cup of coffee," the paper reported. "Last week a person... was invited by a SF policeman to leave the place or be arrested for vagrancy."

The following month, however, the paper reported that a truce had been negotiated and the sit-in was called off.

"About 200 patrons were roistering in the three rooms of the club, the juke box was wailing, light spun and flickered on the ceiling and young things in bouffant hair-styles and false eyelashes fluttered through the throng.

"Among those arrested was the heavily made-up owner of the Chukker Club, 26-year-old Carlos Lara. Lara, dressed in tight slacks and V-necked sweater, was booked for impersonating a woman."

Lara was in for at least a year of police harassment at Chukkers. In May, 1965 Citizen News reported that at Chukker:

By February, 1966, Lara had enough and put up signs in his windows saying, "Chukkers famous for its unusual entertainment now presents police harassment... Last Sat. we had a practice raid. So this week should be the event you've all been waiting for."

Elizondo verified the harassment at Chukkers at her talk.

She said, "It was against the law to wear long hair." Regarding Chukkers, she said Lara would tell people, "Enter at your own risk because this place could be raided at any time.".

At the same time Chukkers was coming under increased police attention, the press was paying attention to an increase in young male hustlers in the Tenderloin. The Chronicle ran a series of articles with titles like "Outcasts' Strange World of Sin," "Neon Sex Jungle" and "Police vs. Sin Jungle" that were related to a Glide Memorial report called "The Tenderloin Ghetto: The Young Reject In Our Society." The outreach from Glide also helped form the first gay youth organization in the U.S., Vanguard. Vanguard picketed Compton's Cafeteria beginning on July 18, 1966.

It is important, however, to distinguish between the picket of Compton's by Vanguard and the riot at Compton's in August, 1966. As a political organization, if Vanguard had been involved in planning the riot, they would have written about it in their newsletter and they did not.

Compton's was a spontaneous event. In "Transgender History," Susan Stryker described the scene:

"The restaurant's management became annoyed by a noisy young crowd of queens at one table who seemed to be spending a lot of time without spending a lot of money, and it called the police to roust them-as it had been doing with increasing frequency throughout the summer. A surly police officer, accustomed to manhandling Compton's clientele with impunity, grabbed the arm of one of the queens and tried to drag her away. She unexpectedly threw her coffee in his face, however, and a melee erupted."

The riot was a fight against police harassment and the enforced poverty that transgender women faced on a daily basis for years. It has echoes of the vagrancy arrests at Hazel's, the lack of respect shown at Tay Bush and the prolonged harassment at Chukkers. It was probably not covered in the press because it did not fit the role the press had assigned them - that of passive vagrant criminals.

But we have both books like "Transgender History," movies like "Screaming Queens: The Riot at Compton's Cafeteria" and the eyewitness testimony of people like Felicia Elizondo to tell us the truth of what really happened. And these stories make more sense when we view it through the lens of Bay Area history, and not in response to Stonewall.