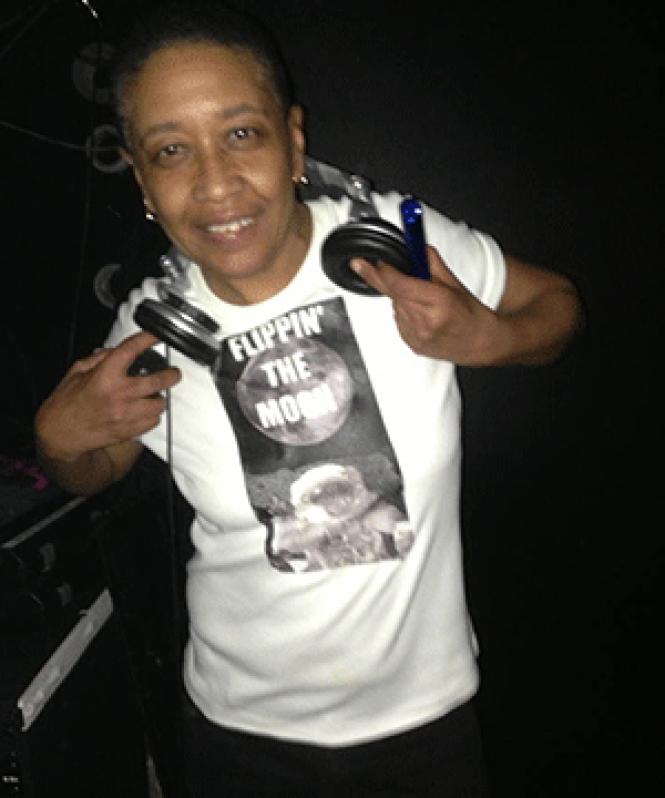 Sharon White in a DJ booth

Sharon White has been playing music for decades, but still keeps up with the newest of sounds. Known for her legendary beginning at the historic Saint parties in the famous and long-gone dome on Sixth Street in Manhattan, the 62-year-old DJ will be the featured guest at this Saturday's Flagging in the Park, and on Sunday, July 31 at The Lookout bar in the Castro.

Don't expect an old-school mix from White. In a phone interview from her New York home, she said, "I'm not a retro DJ by any means. For the most part, fans of older disco are not with us anymore, or are not going out. A lot of that audience listens to me on my podcasts and internet radio."

White said she rarely plays oldies, except for songs that are "restructured for today's sound. I relate to my audience by playing music that they may not have a relationship with. I play what's coming out today or tomorrow."

White got her start playing on radio stations, where she planned sets, only to shift and grow them as her gigs lengthened.

She DJed at womens' events at various New York City clubs and on Fire Island. She also played music and toured with Bonnie Raitt.

The historic Saint, once the Fillmore East rock venue, was also a planetarium in its early days. Since its transformation from 1980 to 1988 as the gay disco haven, with exclusive membership restricted to mostly men by owner Bruce Mailman, White did not get a chance to play until one morning when DJ Jim Burgess left, giving White a chance to fill in.

She played frequently after that, and at historic clubs like Paradise Garage, Limelight and at San Francisco's Trocadero. She still plays Saint at Large events.

"Back in the day, we made about $1500 a night," said White of her early gigs. "I was part of the generation that had hands-on influence in creating the technology. Panasonic would send us turntables that we beta-test for them.

"Now, everybody's a DJ with a laptop. Songs have a life of nanoseconds. They come out so quickly. It's a totally different audience now, with 50 new tracks released in a day. As fabulous as it sounds on Monday, by Friday, you've got 20 more tracks out."

White spoke of how, in the vinyl days, the tradition was to release an album or single on Tuesday, to give DJs the week to blend it into their planned format.

At one point, White had collected more than 25,000 records, and even ran a record store with her then-girlfriend, DJ Susan Morabito, but recently sold them to a fan and collector.

"It was gone and I didn't look back," she said. "Anything that one might want in retro is available digitally. Nothing is collectible anymore, except for people who want to hold it and look over the liner notes."

White does still long for the classic sounds, though.

"Analog sounds so much better anyway. There's no comparison. That being said, we've switched over. We're working in a modality that doesn't have that sound anymore. The kids today aren't missing it, so there's no comparison. It's like talking about a collectible car to someone who doesn't own one."

After chatting about our old New York connections, we discussed the differences between generations, not just in music and fashion styles, but the reason for dancing all night.

The 1980s were about celebrating a sexual revolution, which in the late '80s and 1990s, became benefits to save lives, or dancing late after getting sprung from jail after an ACT UP protest.

So, what are nightclub revelers celebrating today?

"We grew up in a time when revolution was real and we were changing things," said White. "Look how far we've come as LGBT people in the universe and what's accepted and mainstream."

White spoke of the continued need to dance and get a groove going, and how she still plays spontaneously, working with a crowd to find the songs to mix.

"Unless I'm doing something that is a specific occasion, with a live performance, I don't plan it. I let my creative juices flow and wing it. The longer you format a set, the more easily you get stuck."

Long sets were part of White's heyday at The Saint, where, she said, "We worked with a 12-hour minimum. It's like being in brain surgery. It's hands-on and you shift to guide through the night. You didn't have a relief DJ."

White said she's enjoyed the past years of shared nights and collective DJing.

"I love playing with other DJs. Our creative juices blend and push the envelope. I love to collaborate, I always have. I also enjoy being a mentor. That keeps me in the loop of what's going on."

With her online presence being easier than working in clubs night after night, White said that she's still able to connect with fans, just differently.

"It's sort of freeing," she said. "People respond and take the time to chat with you online and ask about things. It's different. You can be so close with a person that you've never met."

White said she's excited to return to San Francisco, where, she said, dance music fans are "edgier, more than New York or LA."

She's also thrilled to be playing in Golden Gate Park for Flagging in the Park.

"I look forward to getting back there. I have lots of really close friends there and I'm pining for them, and to meet my new friends, too."

On the record with Lorant Duzgun