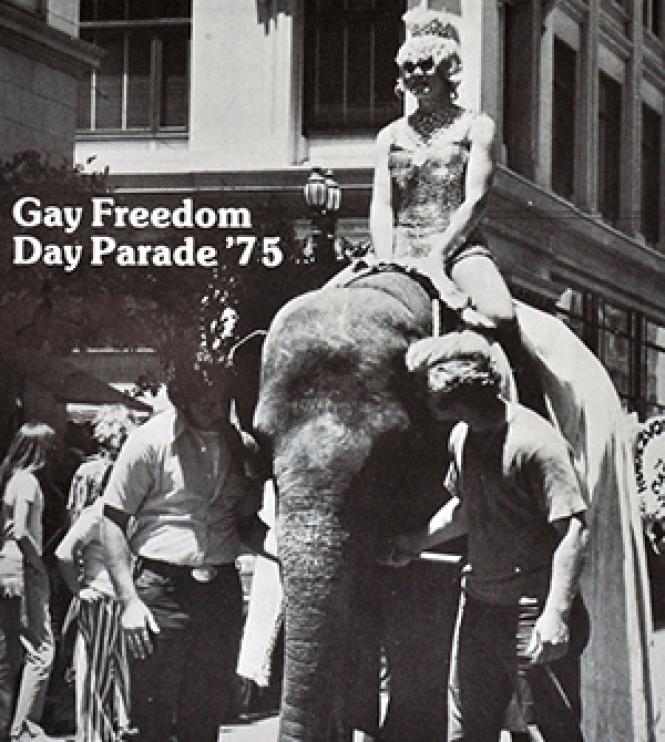 1975 left behind bird affiliated names, when out of a field of seven candidates, the Daisy Empress X Doris took the throne. At her Investiture -when the Empress receives all the symbols of office in an elaborate ceremony - there was a bomb threat and the Sheraton Palace Hotel had to be evacuated; as soon as the all-clear sounded, Investiture resumed.

Doris turned heads in 1975 when she rode a live elephant in the Gay Freedom Day Parade, costing her $800 with a trainer from Marine World. Since Emperors and Empresses were still elected independently and at different times of the year, Doris shared most of her reign with the Cable Car Emperor III Bob Cramer, who fittingly founded the Cable Car Awards, honoring men, women, and businesses in the gay and lesbian community for their accomplishments.

Sadly, these important awards, which lasted for 20 years, ending with a grand finale program in 1994, are nowhere to be seen on Wikipedia or any other easily accessible on-line historical site. Bob Cramer is also the only San Francisco Monarch to lie in State at the City Hall Rotunda, evidenced by a video in the official archive.

In September of 1975, Michael Caringi defeated two other candidates to become the Golden Gate Emperor IV. In 1976, out of five candidates for Empress, Flame ascended to the throne as the Red Cardinal Empress XI, and San Francisco has been seeing red ever since. In a comical salute to her leather roots, Flame had a stepping down party South of Market, where courtiers wore red firemen helmets among flashing street repair signs as they "put out the Flame."

Her second Emperor, running for the second time against four other candidates, was Hector Navarro Caceres, the Gamecock Emperor V. One of his first proclamations was that the words "After Norton" or "A.N." be added after the Emperor titles and numbers in deference to the historic figure Joshua Abraham Norton.

The next year, Hector started an annual pilgrimage to visit the grave of this first Emperor at Woodlawn Cemetery in Colma; Jose Sarria was a special guest at that first pilgrimage, a tradition that continues to this day, bright and early on the morning after our annual Imperial Coronation (sunglasses encouraged).

In 1977, Jane Doe became the Silver Rose Empress XII, to this day, the youngest elected Empress of San Francisco. Perhaps because of her age and/or her proclivity for leather, demonstrated by her arrival at the San Diego Coronation in full leather with crawling slaves on leashes, Jane had many run-ins with the Tavern Guild Board and Privy Council, resulting in her being prohibited at the end of her year to do her traditional final walk and number.
Red Cardinal Empress XI Flame.

After much discussion at the ball, she was granted her final performance and completed it by walking off the stage and out the door of the Hilton ballroom. This was the infamous Coronation attended by Carol Channing, who famously asked, "Are Coronations always this exciting?" She went on to crown Char the Silver Star Empress XIII, besting three other candidates, and to be declared Carol Channing, the Honorary Empress of California.

Meanwhile, Hector was followed by Jim Ostlund the Golden Spike Emperor VI, After Norton, competing against three other candidates. Jim was the owner of the Castro Station bar and known for his train engine prop, in which he rode, even into Portland's Coronation in 1977.

In 1978, Bob Ross, successful businessman and part owner of the Bay Area Reporter, stepped up to compete against two others and became the Double Eagle Emperor VII. He became known for his auctions at monthly charity events, raising money for various organizations, generosity which continues today through the Bob Ross Foundation. He shared much of his reign with the Spice Empress XIV Ginger, who won in 1979 against two competitors who went on to win the title in later years.

Much later, Jose Sarria gave Ginger the dubious title of Grandma, thinking she acted much older, although they were close in actual age. When she stepped down, Ginger amazed everyone with her elaborate Elizabethan costume, make-up, and dramatic sets borrowed from the San Francisco Opera.

Both Chuck Demmon, The Trident Emperor VIII, A.N., and Bobby Pace, the Shamrock Emperor IX, A.N., stepped down not at a Coronation, but at the Joshua Norton County Fair, showcasing various vendor booths, games, and charity events. Chuck became instantly recognizable for his uniforms suggestive of Emperor Joshua Norton, including a hat with plume. Bobby was well known as a bartender at Maud's, Rickki Streicker 's Lesbian bar; at the time California law prohibited women bartenders, unless they owned the bar.

In 1980 Tessie was elected the Red Rose Empress XV out of three candidates and became known for her dedication to the hungry. The Tenderloin Tessie Dinners she started continue today at Easter, Thanksgiving, and Christmas, staffed with volunteers from the Imperial Court, the Ducal Court, and various other groups. Phyllis then defeated only one competitor in 1981 to become the Rainbow Empress XVI. She was until recently quite active in the San Francisco community, but now resides in Palm Springs and continues to say "Doncha know?"

Finally, in 1982, coincidentally the same year as the first Gay Games in San Francisco, the Tavern Guild, the Emperors, and the Empresses agreed that a single annual Coronation made more sense. Gene Bettis, the Wild West Emperor X, A.N., would serve longer than any other Emperor in order to coordinate a joint Coronation in February of 1983. The Ivory Fan Empress XVII Mae had been elected over two others in 1982, but was in the hospital and unable to attend Coronation, so the Council of Empresses made special arrangements to crown her in her hospital bed.

And so, the first Emperor and Empress to ascend their thrones together were the Mythical Dragon Emperor XI, A.N., Tattoo Jim Michaels and the Siren, Temptress, Seductive, Musical Empress XVIII Connie. It was a year of great transition as all the details of a joint reign worked themselves out, but the Imperial Court was finally unified and the organization was stronger.
Tessie the Red Rose Empress XV. photo: courtesy Imperial Court of San Francisco Coronation program

In 1984, at the Kabuki Theater, at the time a much larger single theater suitable for such a large event, the Golden Phoenix Emperor XII, A.N., Rich Carle and the Silver Nightingale Empress XIX Remy Martin stepped up, setting new standards of pageantry and authenticity. At their Investiture, they both appeared in bathrobes and were then properly attired by their attendants in the garbs and symbolic emblems of Emperor and Empress. Their step-down in 1985 introduced a new start time of 6 P.M. sharp and featured a dramatic opening entrance with the Lesbian/Gay Freedom Band dressed in Chinese costumes.

Remy was the Empress who insisted that San Francisco Empresses, upon the successful completion of their reigns, would be titled Absolute to distinguish them as Empresses from the first Court of San Francisco, as opposed to any other court of the International Court System.
Emperor 10, A.N, Gene Bettis.