The absence of doubt: Michael Lowenthal's dynamic 'Sex with Strangers' 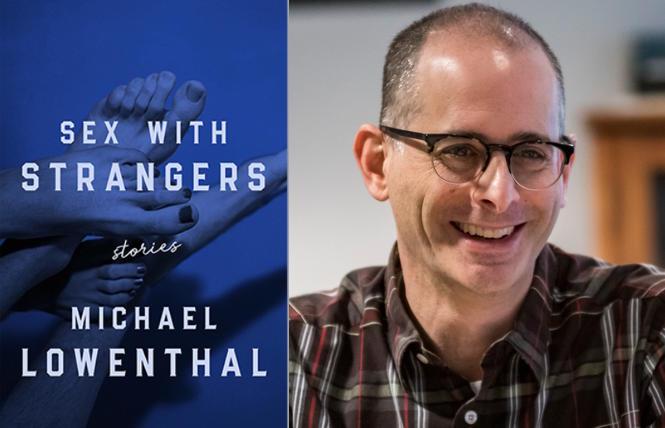 In Michael Lowenthal's fifth book, Sex with Strangers (University of Wisconsin Press 2021), the writer steps out of the novel and delivers a fiery collection of eight stories coursing through queer and straight lives, revealing the untamed self and the tools that bring us both nearer to, and farther from, self and others. The book brings us closer to the questions of being here and there and wherever we find ourselves, inclined to intimacy, involved in this life where the body remains our preeminent companion.

Narrated in the manner that the best sex writing is written in, the book expands beyond mere interminglings of body parts with another's body parts. Lowenthal's deft sex writing allows the reader's imagination to fill in more of the scenes and to do the thrilling work: to provide the color, the modes of performance, the dance between people entering intimate acts, providing the space to trigger the theater of the mind.

The story that rises out of the book and succeeds its own fascinations, "Overboy" delivers an exacting account of an Ecstasy high, the absolute "absence of doubt," Lowenthal writes. Keith is out at a gay club, alone, a gastroenterologist by profession, and it's his 29th birthday. Regretting the end of his twenties, he meets Ryan, already high, already free. Keith takes one of Ryan's pills and ends up on the dance floor where he discovers a hand inching into his jeans. But it turns out to be an older man named Stan, not Ryan, who is off dancing and cavorting with an Irish-looking guy with whom he leaves the dance floor.

Of Ecstasy, "Up was the perfect word for it, and not the hyper up of cocaine —nothing to do with superiority, with one person higher than another— but a soaring elevation of everything and everyone together." Put into words many of us have tried to express, Lowenthal transcends here.

In "You Are Here," a newly-ordained priest stationed on a cruise, "Father Tim was hoping to move confession to the Liberty Deck, where penitents could come clean beneath the pure tropical sun." Father Tim begins the confession session with Babs, who navigates her life in the middle of a cruise she and her husband Les have taken for the purpose of renewing their wedding vows. But as Babs confesses to Father Tim, she's met a woman with whom she's initiated a lesbian affair. "'With her,' says Babs, "I feel I'm finally there. Know what I mean? We're the center. Everything else dissolves."

In another half-confession, Father Tim meets Alison, an old flame from before he entered the priesthood who works for the cruise line, and she's beautiful as ever. Father Tim asks her, "Something you want to confess?" Alison, baffled by the question, replies, "I have nothing to confess. I mean, other than what you already know." Later to be disappointed that Alison is engaged, by story's end Father Tim "... conjures the future, seeing it all too well: the dozens and dozens of weddings he'll be called to oversee, and the others he'll never witness or attend——Alison's wedding to Andrew, his own. He'll be joined to God, and that will have to do."

From queer to straight, the encounters question what it means to be alone. As in "Thieves," the narrator is on his third trip to Bahia, able to handle basic conversations in Portugese, encountering two locals who ask to use his phone. Later, "I pressed my face into the smother of cheap perfume. I was touched to think of him primping, dousing these parts for me, to cover up his smell of poverty: sweat and grime and palm oil, the faintest trace of piss... he filled me in one stab. I loved the way he handled me, thumbs hard at my ears, as though I were a tricky apparatus that needed steering."

On the evolution of not only queer literature, but our community as a whole, Lowenthal told the Bay Area Reporter, "I love how the queer canon has been expanding beyond what used to be its typical constituencies and topics, e.g., coming out stories. We're seeing a lot of previously underrepresented voices and perspectives starting to take center stage: trans and nonbinary voices, queer Black and Asian and Latino voices, queer African stories. Plus, we're seeing queer stories that play with form and structure, queer stories that travel back into the past or imagine into the future."

Indeed, we see a coming to terms with our own identities, complexities, and the possibilities for a stronger future as a potentially united LGBTQ community.

Beyond casual encounters and hookups, beyond dating apps and quick, anonymous sex, Sex with Strangers looks at people and the content that makes them who they are. There is yearning in the stories, the universality of this condition, and how what mentally drives us is as indefinable as our biological impulses.

In "The Gift of Travel," Ben is a writer taking care of Jim, his terminally ill mentor. Jim "... hoarded the miles in the past few years, before he got too sick to fly, hopping from campus to campus with his retrospective lecture 'Filthy as Fuck: A Faggot Writer's Life.'"

Further on, Jim asks "This is why we marched? And screamed our fucking faces off? And sat in all those nasty jail cells — this? For your right to be such boring marrieds?"
Lowenthal sums up in a handful of words what elder gays and lesbians have echoed and tried to keep asking. It's a pertinent question, one beyond sex, one that brings us closer to the now, to identity, to the answer who the LGBTQ community truly are. We are many things, but evolving, hopefully, as distinct creatures not only defined by a heteronormative world.

In language rich with metaphors, Lowenthal traces scenes that pop across the page and douse with fire the reader's own ignited thoughts. It is writing in touch with the projections of life and how their reflections bounce from one another.

Lowenthal added, "So many younger people these days have a different concept of sexuality than we did when I was in my twenties or thirties. There's so much more fluidity, so much more resistance to categorization. I expect this will show up more and more in queer books, and it will blur the very category of 'queer' lit and make it harder to define. Which I think is just fine. We live in such a tribal time, and I'm all for breaking down the distinctions between tribes."

On the question of being a queer writer, Lowenthal concluded, "Being a 'gay writer' or not is more about marketing than about any inherent identity. I've never chosen what to write or how to write it based on any conception of what category or categories other people might put me in. I'm queer and I write a lot about queer characters, but that's not exactly by design. It's just what I'm interested in and how I see the world. But if I think of a compelling story that doesn't involve queer sexuality, I see no reason not to try to tell it."

By the end, we're left with the real person we're afraid of and that is ourselves. Where we go from here depends upon the quality of the questions we're asking ourselves. Sex with Strangers is a useful tool to assist the process in knowing more about the human condition and the inexplicable nature of intimacy, sex, relationship, and self.