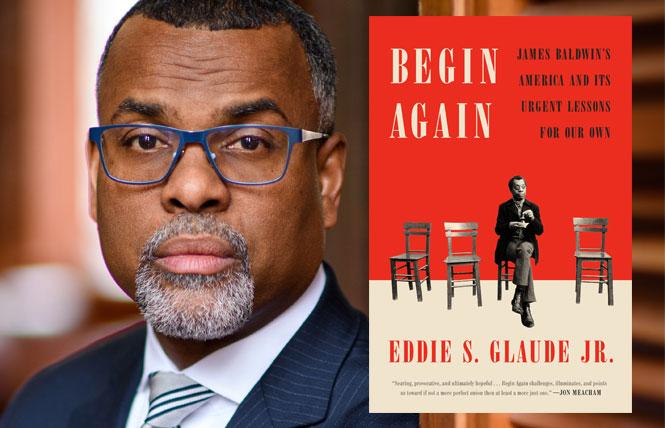 Few American writers have evoked as much adulation and vituperation as James Baldwin. Had he written only his second novel, Giovanni's Room (1956), his place in the gay literary canon would be assured. But he wrote and wrote because he had to, at least as much non-fiction, his views of what it meant to be an African-American and gay writer ever deepening. Begin Again: James Baldwin's America and its Urgent Lessons for Our Own (Crown) joins a shelf of books whose timings have been as perfect as space-re-entries.

Its author, Eddie S. Glaude Jr., Chairman of the Department of African American Studies at Princeton University, author of a shelf of books of his own and a close reader of Baldwin for three decades, has added to the vast Baldwin literature a book unique in every way. It's biographical without being a biography, personal without fawning about its subject, political, polemical, and deeply moving.

It was Baldwin's fate —you could call it nothing else— to come into himself atop the grating seismic plates of Martin Luther King's non-violence-oriented near-messianism and Eldridge Cleaver's Black Power movement, with its generation-rousing text, Soul on Ice. As it happened, Baldwin made public appearances introducing —at length— both of the black titans.

"[Baldwin] was a captivating speaker," Glaude writes, "with a powerful and almost hypnotic cadence; if the desire to be a preacher had long since left him, his ability to hold a crowd in his hand had not." If neither of the men he introduced knew quite what to do with him, it is Glaude's speculation that it was the uneasiness both leaders with Baldwin's unmistakable and undisguised queerness.

The concept at the core of Glaude's book is "the lie": "Taken as a whole, the author writes, "the lie is the mechanism that allows, and has always allowed, America to avoid facing its unjust treatment of black people and how it deforms the soul of the country. The lie cuts deep into the American psyche.

"[Baldwin] fully understood the power of the American lie. It is the engine that moves this place. It transforms facts and events that do not quite fit our self-understanding ... of American greatness or features of our never-ending journey to perfection. The lie is the story that warps reality in this country, which means that resisting it involves telling in each moment a truer story, one that casts the lie into relief, showing it for what it is."

The lie resurfaces in this book as much as it does is because of Baldwin's incessant peeling away of its untruths in his thinking, his writing and his soul. By the time Baldwin introduced King, "the distance between them was widened by Baldwin's sympathies with the militancy of the younger generation." King's assassination devastated Baldwin, but, Glaude argues, opened a path for Baldwin to go deeper into the exposure of the lie than King had.

As arresting as anything in this book is Baldwin's insistence that it was also the duty of black people to challenge the lie, to look deeply into how much of it they had come to believe and act in accordance with.

Glaude writes, "It is not our task to save White People: That old idea has provided comfort for far too many across generations who continued to hate and harm. It works like a ready-made absolution: White people will be forgiven for their sins, because that's what black people do. We forgive them, and they sin again. Baldwin was right to give up on this folly."

Again and again, it's startling to read descriptions of campaigns of black activists —across generations— assailing the symbols of the Confederacy, the flags, the monuments, the statues. Book publication is a comparatively slow process, but, both astonishingly and ironically, Begin Again seems ripped from today's headlines.

At his most polemical but moving, the author decries wasted effort to woo and change Trump followers, a lesson reinforced from his return to Baldwin's later work.

"Our task is to build a world where such a view has not space or quarter to breathe. I am aware that this is a radical, some would say dangerous, claim.... But we cannot give in to these people. We know what the result will be."

Significantly, the book is all but devoid of discussion of Baldwin's fiction. The revelation for me was that Another Country, my personal favorite Baldwin novel, was written during a second, nearly decade-long self-exile — in Istanbul.

In his own hard-fought retrieval of the core King principle —on which both Baldwin and Glaude rely— is the supreme value of love. The author compares late Baldwin to the late John Coltrane's A Love Supreme.

"No matter how vague [Baldwin's] invocation of love may be, love remains the one force that transcends the differences that get in the way of our genuinely living together." 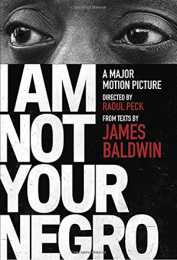