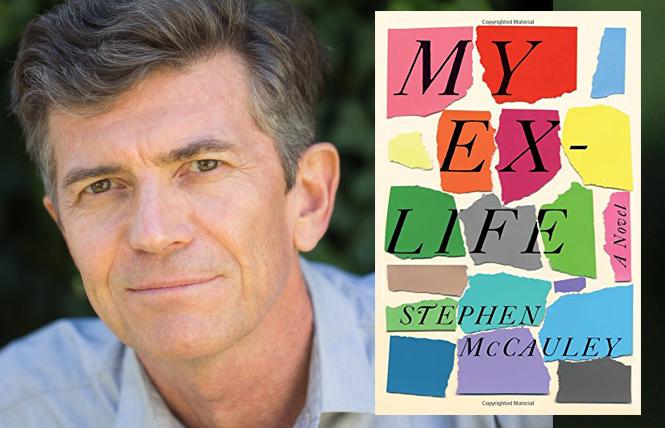 With the disastrous outpouring of calamitous news daily from the Trump administration, never has some mordant humor been more urgently needed. Fortunately, the great news is that after an eight-year absence, author Stephen McCauley has resurfaced with one of his best novels. McCauley has written six previous books, the most well-known being his debut, The Object of My Affection, later turned into a movie starring Jennifer Aniston and Paul Rudd, about the relationship between a gay man and a straight woman, a theme he returns to in his new book. He currently serves as Director of Creative Writing at Brandeis University. The press release states, "In his spare time, he practices yoga, the ukulele, and ironic detachment." The latter comment is an excellent example of McCauley's drollery, cementing his status as a superb exemplar of the comedy-of-manners genre. He writes amiable satires on the mores and affectations of contemporary life that questions cultural norms. With this format, plot is of secondary importance. Witty dialogue and biting (but not offensive) social commentary are paramount.

David Hedges is a 50-something gay man, a successful college admissions consultant living in San Francisco, who helps privileged children get into good schools. But at the start of the novel, his boyfriend Soren has left him for an older surgeon, he's now overweight, and his best friend Renata, a realtor, is trying to sell his ocean-view rental out from under him, pushing him to the verge of eviction. Meanwhile, across the country in Beauport, a tourist town on the New England coast, resides Julie Fiske, David's ex-wife from 30 years ago. They were briefly married, but discovering he was gay and having lost their baby, they divorced. Her second husband Henry has abandoned her for a younger woman, Carol, but wants to sell their huge Victorian house, in which Julie has been renting out rooms on AirBnB to make ends meet along with her teaching. She wants her 17-year-old daughter Mandy to get serious about applying to colleges. With all this stress, despite claiming she has quit, she continues to smoke pot. Finalizing their divorce, Julie has only two months to raise some serious money to buy the house from Henry.

Mandy, rummaging in the basement, finds old boxes with books, records, and photos indicating her mother had been previously married. Henry, making a threat that if Mandy doesn't apply to college, she will have to live with him and Carol, compels Mandy to lie to him that they are getting assistance from David, prompting Julie to email David and renew their connection as best friends. To escape his problems, David flies across country to spend his summer vacation, aiding Julie with her issues and assist Mandy in writing a winning college essay. Mandy is confused and is making some dumb, potentially dangerous choices. Can David and Julie help each other put their lives back together?

Even with a brief summary, the plot is rather minimal, but there are numerous colorful supporting characters, a McCauley specialty, such as the alcoholic Sandra, an online expert in making more money renting out AirBnBs, including her obsession with throw pillows; Julie's sultry neighbor Amira, good-naturedly cheating on her rich older husband; and Kenneth, a bossy antique store owner romantically interested in David. McCauley's gift is to summarize these people in just a few sentences of dialogue so you recognize instantly who they are, yet appreciate their eccentric qualities.

It's hard to convey the sheer joy of reading McCauley's effervescent, penetrating prose that can be simultaneously hilarious and heart-breaking. McCauley's genius is to allow characters to say outlandish comments that we all think in our heads but wouldn't have the courage to voice out loud. McCauley is particularly keen on the complexities and pitfalls of modern relationships, both gay and straight. Here's a brief taste of the many bon mots: "All couples start off as Romeo and Juliet and end up as Laurel and Hardy." "They were probably in their early 30s, that awkward age when people still believe they matter and that life is going to go their way." "She had the disturbing pallor David had come to recognize as a sign of either genetic illness or an unhealthy familiarity with Harry Potter." "She and her husband were wine connoisseurs, which is to say, incipient alcoholics with money." "My mother was awful, a real - oh, what's that word, the terrible one that begins with a C? Catholic?" "I think people like standing ovations as a way of convincing themselves they got their money's worth."