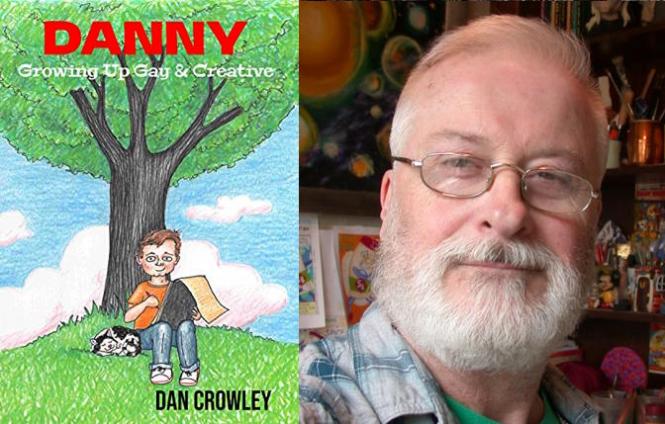 Chicago-based gay visual artist Dan Crowley is a creative person with a considerable adult following. Working in multiple media, including sculpting, painting, and illustration, Crowley has established himself with pieces in private collections as well as public and commercial exhibitions. He even had a popular comic strip, "Uncle Dan," that ran for three years in the now-defunct gay publication, Nightspots.

As he writes, "It's not easy growing up in a world that tells you to hide who you are," and via a series of illustrated vignettes, Crowley tells his story of learning who he was and how he became himself.

Gregg Shapiro: Dan, I'd like to begin by congratulating you on the publication of your first book 'Danny, Growing Up Gay & Creative.' How long was the book in the works?
Dan Crowley: This was the project I decided to focus on when quarantine time struck on March 12, 2020. I had several book projects in pieces and wanted one of them to be completed during that time. I worked on it all during the lockdown. I decided on this book because I needed to be sure to send out healing thoughts to people who are going through this now.

Were any of the drawings in the book already in existence or did you create them specifically for 'Danny: Growing Up Gay & Creative?'
All 50 drawings are new and were drawn for this book. Some of the images are based on old family photos.

Who do you see as the target audience for the book?
When booksellers ask about a target audience, they want to know what part of the store to put your book in. My book deals with childhood and growing up so it wound up being labeled a children's book, which in a way it is. But I want people who are grown to see it too, and to remember the moments in their lives that are like mine. 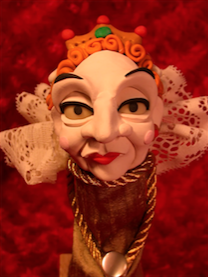 Please say something about the decision to make it personal, your story, as opposed to creating a character.
It never occurred to me to make up a character for this book because it was always meant to tell my story. If I changed things, it would have lost the honesty that's there.

At first, it was going to be a written book with a few drawings and then the drawings took over and it became two books. I worked on the drawn book because it seems to be more universal. I want people to remember their own stories. Overburdening them with written details about my experience makes it too much about me. This is about all of us. Making it about my moments but leaving it open to what the reader brings to it.

Since it's not a traditional story in terms of plot, such as having a beginning, middle, and end, how would you describe "Danny: Growing Up Gay & Creative" to potential readers?
So far, my story doesn't have an end, true. This book is fifty drawings showing a gay child developing from birth up till his high school graduation. It's a one-character book full of those moments when being gay or creative popped out. The moments that were my "shame" I turned into my glory. By focusing on Danny having his moment and not the adults' reaction to it, I explored the freedom I had and what I did with it naturally.

As is so often the case, religion played a role in your upbringing, from "ruining Easter" (p. 7) to Adam in the movie 'The Bible' (p. 13). What role, if any, does religion play in your present life?
I was raised Catholic. It left a mark. I know wonderful people who lived as nuns or priests, but I learned that people are people, some good and some not. There are wonderful people in each religious community who are there for the right reason, but not all. I went to an Episcopal church for 10 years and now I find my path of spiritual discovery has me focusing on a more personal spirituality (rather) than an organized religion. I have strong beliefs on creation and the artist. I think what I do is a form of prayer.

Dr. David Reuben delayed and impacted the coming out of a lot of young queer people of a certain generation with his book 'Everything You Always Wanted to Know About Sex.' Would you say that you were one of those people?
That book came out when I was nine years old. I read it when I was eleven. I didn't know anything about gay sex or the world of homosexuals, but I knew I wanted to be loved. That book told me that wouldn't ever happen for me. That was soul-crushing. I came out in stages with the final steps at 23 years old. That book, the Catholic church, and everyone I knew were my reasons for not wanting to come out and be myself. I didn't know who I was! Positive gay role models were not to be found then.

Thankfully, Barbra Streisand and other strong female icons including Mae West, Liza Minnelli, Helen Reddy, Bette Midler, Joan Crawford, and Glenda Jackson provided comfort and inspiration to you and many others. Those women are depicted in the book.
I love to sing. For me, it was always about emotional release. Singing along with Barbra started when I was six and would see her sing on talk shows in black and white. She taught me how to release feelings through music. I wish I had a film of my 11-year-old self singing "Maybe This Time," full of tears and heart. Yes, powerful women have always caught my eye and taught me something.

Another "woman," although one made of injection-molded plastic, namely Barbie, is included in the book.
When I was a baby boy in diapers, I loved Barbie. My sisters each received one, but not me. When I would play with my sister's Barbie I would get yelled at. "Danny! No!" it would go. One day while changing my dirty diaper my mother saw a face peeking out from the poop. Barbie's head had come off while I was playing with her, so I stuck it in my pants. My mother yelled, "Ahhhh!" then laughed. I still play with Barbie and have many. She's a muse, not a role model.

You have had a successful career as a visual artist. Are there any projects at which you are currently at work that you would care to mention?
Throughout my very long career I've done all sorts of projects. I've done window display, poster design, sculptures, paintings; all sorts of things. Right now, I'm learning about publishing. My first book was a learning curve. I have a couple other books that I'm working on and, as always, sculpting commissions for portrait puppets keep coming in. I've done those for over thirty years now! My Etsy page, Dan Crowley Studio, is filling up with new work for the holidays.

You mentioned other books in the works. Would one of them be based on your popular series of famous people in history depicted as frogs?
Two new books in the works, but neither about frogs. I began drawing my frog characters when I was in seventh grade. My Fargo Frog was to be my Mickey Mouse. From the beginning, I also drew my frog as characters from history and pop culture, but then people wanted their portraits done as frogs, too. I've done many paintings of them at this point, lots from my old family photos. Would they wind up in a book? I don't know yet. One of the exciting things about following where my interests take me is that I get surprised!