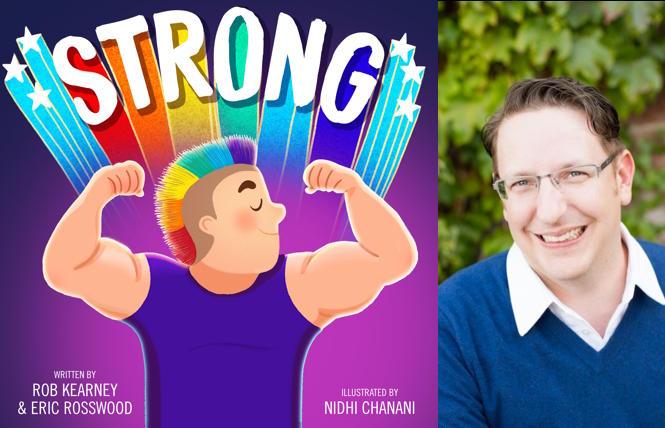 Gay author Eric Rosswood wants LGBT kids to believe in themselves. In his new children's picture book "Strong," Rosswood tells the story of Rob Kearney, a gay strongman who trains himself to lift hundreds of pounds. As the story progresses, Kearney learns with the help of his husband to fully embrace who he is without worrying about what other people think of him. Rosswood co-authored the book with Kearney.

The book is short, simple, and to the point. Each page features a drawing by Nidhi Chanani. Each drawing comes with a short text that tells Kearney's story.

The book poses a simple question for its readers: what makes you strong? In Kearney's case, his strength comes from not only his ability to lift heavy weights, but also from his ability to proudly be who he is.

In an email interview with the Bay Area Reporter, Rosswood revealed that he first discovered Kearney's story in an online article and was quite taken with him. He found the story inspiring and felt that it would also inspire young people, so he reached out to Kearney on Twitter and asked him if he'd like to collaborate on a children's picture book. 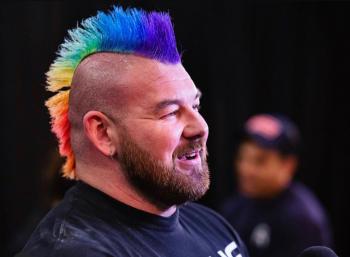 "I interviewed Rob multiple times so we could identify the best story arc for this book," Rosswood said. "He's a wonderful guy with a big heart."

The book follows Kearney through his childhood, when he was found to be an unusually strong kid. When he was 17, a teacher introduced him to Strongman, a competition which tested strength. Kearney began training. He ran, swam, and lifted weights, eventually being able to lift four hundred pounds.

Whenever he finished training, Kearney would change into his colorful street clothes, which he felt were more representative of him. At one weightlifting event, Kearney meets Joey, and the two fall in love. Joey notices that Kearney always changes into drab colored clothes when he lifts weights, saying that strongmen don't wear bright colors.

"Well then," said Joey. "I'll wear bright colors with you." 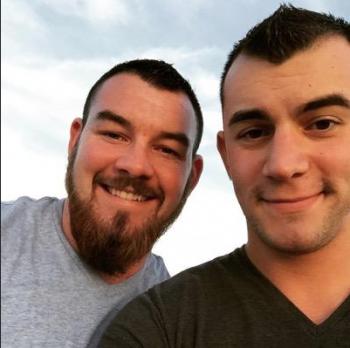 As the two train together, Kearney prepares for a major competition. Not only is he now wearing brightly colored clothes, but his hair is also dyed to match the colors of the rainbow flag. With Joey's help, Kearney learns to stop worrying about what other people think of him and finds joy in presenting himself as he truly is.

"There are very few LGBTQ+ role models in children's literature and I think that needs to change," said Rosswood. "When I heard Rob's story, I thought this is something kids need to know about. They need to see openly queer people thriving and succeeding in life. Because when a young person sees another person like them achieving greatness, they think to themselves, I can do that too. And that's how we create positive change."

Rosswood feels that a book like "Strong" is especially needed now, with Florida having passed the so-called 'Don't say gay' bill, which forbids teachers from acknowledging that gay or trans people exist in any classroom from first through third grades. Other states like Texas are now threatening to do the same.

"Bills like that are so damaging to kids," said Rosswood. "When they have to draw pictures of their families in school, there's nothing wrong with them sharing a picture of them with same gender parents. Being pro-family is about being pro-all-families. 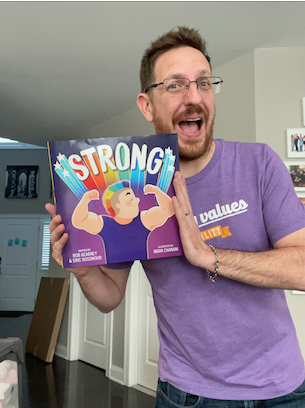 "These hateful laws send messages to children that there's something wrong with them and/or their family. We need to combat that at every opportunity. In addition to voting to make sure that supportive people are put in office, we also need to surround kids with positive reaffirming messages that they are valid. We hope this book does that."

The author feels that there's another simple but important message in "Strong," that once a person has accepted themself for who they are, they can achieve anything. He also believes the book has universal appeal, that it will not only appeal to gay kids, but to lesbian and trans kids and even to kids who aren't queer.

"The story of 'Strong' is about finally being able to be your true, authentic self," he said. "But there's also so much more to it. The story is about all the different ways we can be strong. It's not just about physical strength. It's about finding your inner strength, and I think that's something we can all relate to regardless of one's orientation or identity."

'Strong' is available at Fabulosa Books, 489 Castro Street, at Books Inc, and on Amazon. www.ericrosswood.com