Gran Fury's glory: Jack Lowery discusses his book, 'It Was Vulgar & It Was Beautiful: How AIDS Activists Used Art to Fight a Pandemic' 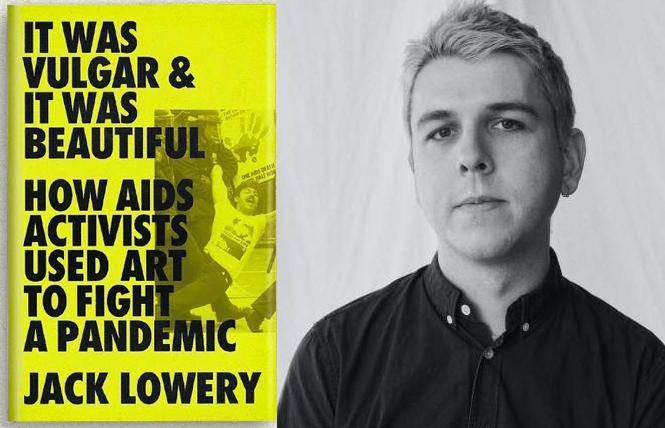 In "It Was Vulgar & It Was Beautiful: How AIDS Activists Used Art to Fight a Pandemic" (Bold Type Books), writer and scholar Jack Lowery fully explores the history of Gran Fury, the activist-artist collective that cleverly incorporated advertising style into activist agitprop in the late 1980s and early '90s.

Lowry not only discusses and fully explores the intent of the notorious posters that were wheat-pasted on buildings around New York City during the peak of the ACT UP's heyday amid the AIDS crisis. He also dives into the collective's inception and their internal squabbles, relationships, losses, and eventual rise to fame with galleries in the art world.

The book's title is derived from a quote by Gran Fury member Donald Moffat, who, when Lowery critiqued other sanitized depictions of the AIDS activist group, saying, "What made ACT UP so effective was that it was kinda vulgar and raunchy," Moffatt replied, "It was vulgar. It was all those things. It was vulgar and beautiful." 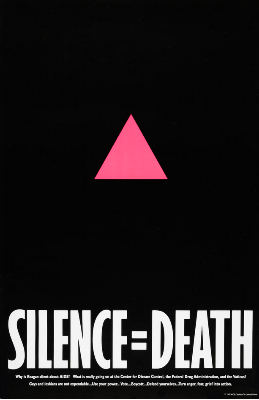 Initially called the Silence=Death Collective, the group's later name comes from the brand of the Plymouth cars used by police departments, but also, as one member noted, it sounded like a Tennessee Williams play.

Lowery doesn't pull punches and includes some of the darker aspects of the struggle that members of Gran Fury had in keeping the consistency of their focus while others later critiqued the growing expense of their projects.

Rather than frame the posters as remote objects, like certain later exhibits that leave viewers possibly unable to recognize the immediacy of their placement on subway and bus posters— like the famous "Kissing Doesn't Kill" series— Lowry investigates and shares the full evolution of how these powerful now-iconic images came to be.

Through personal interviews, oral histories from Sarah Schulman and Jim Hubbard's ACT UP Oral History Project, as well as numerous research materials, Lowery has been able to piece together a thorough history of a specific aspect of the AIDS activist organization that helped empower people with AIDS/HIV.

In a phone interview from his Brooklyn home, we discussed his extensive study of Gran Fury, and enthusiastically compared notes on my own experiences in ACT UP New York during these tumultuous years.

Jim Provenzano: In reading your book, I was struck by how many memories came back to me from my years in ACT UP, specifically participation in actions, the creation of a few smaller ones, the regular Monday night meetings at the Community Center on 13th Street, and later at Cooper Union. Can you talk about how you avoided nostalgia in recounting those years?

Jack Lowery: One of the things that gets cast in retrospect is showing the human frailty of what was happening in ACT UP; the human-ness. One thing that several interviewees mentioned was how when people were being trained to talk to the press, they wanted to be portrayed as regular human beings, not just militant activists, which they were, of course. 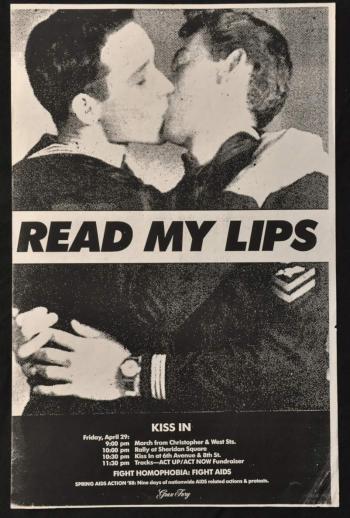 But that's not the whole story of what was happening. To be nostalgic about ACT UP, you have to cut a lot of stuff out. People often talked about things like where they went after the demonstrations, not just what they did at the demonstrations.

You do reference the inspiration for writing the book in its first part, but can you share a bit of that?
I started working on this book five years ago; writing and researching. The motivation for it was partially the moment that we were in around 2017. What was happening in politics and in our culture at the time set it off. Obviously, a lot has changed in the past couple years, but a lot hasn't.

The further and further I got into this work, I began to realize how integral Gran Fury was to ACT UP's success. It seemed like that was not being discussed. These posters had such an effect in visualizing its intent.

Living in New York, even though it's decades later, I can get a feel of how the posters, wheat-pasted on buildings, acted on people, confronting them. I was really interested in exploring the impact these posters had once they entered the world; what conversations they caused to have or circumvented. 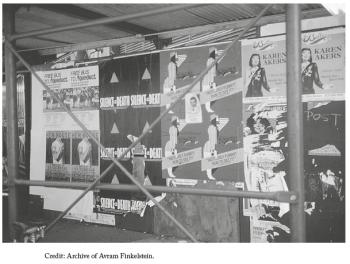 Yes, I remember walking down a street in Manhattan on a date with a guy and seeing the posters, and when he criticized them, I basically broke off the date after defending the posters. Less than a year later, I was going on guerilla wheat-pasting parties with a few other members of ACT UP. It was very sticky. There was a kind of alchemic mix of despair and joy in struggling together.
In the interviews I've done, one thing that people have asked is, 'Would a 25-year-old be able to understand about those days, for example, without social media? What I couldn't wrap my head around were all the pre-9/11 security measures that were in place; that you could just get away with so much.

The affinity group The Costas broke into federal property, the CDC offices in Atlanta. And they got released that day. You cannot do that anymore. You can't infiltrate the New York Stock Exchange. You would be shot, and that is not an exaggeration.

No, definitely. We accomplished some rather daring feats. I was arrested half a dozen times.
People ask what strategies ACT UP used that are applicable today, and there are a lot of things, specifically as it relates to Gran Fury and messaging, but ACT UP exists in a context that ended so shortly after. 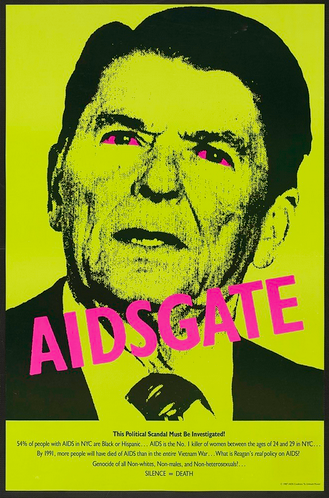 The consistencies of Gran Fury's imagery —borrowing a visual style from Barbara Kruger, the persistence of Futura Bold as a font— are explored in your book, in particular the now-iconic Silence = Death poster, and eventually, T-shirts. Another memorable favorite is the 'Kissing Doesn't Kill' campaign, which featured three couples, including people of color.
Gran Fury was always about fitting their work into the visual landscape. 'Kissing Doesn't Kill' is a great example of camouflaging, how they started to place their work in spaces reserved for conventional advertising.

They didn't want it to be immediately clear. It looks like a Benetton ad, which you're used to seeing, but there's just enough that's 'off' about it, even though it's using all the usual visual signifiers. With Silence=Death, though, there was no confusion. This was not disguised as 'a new product.'

I like how you also bring up different people's perspectives of not remembering certain specifics while others have varying memories, like the Read My Lips posters and T-shirts, specifically the two male sailors kissing, and how that came to be. You even recount how one of the subjects contacted ACT UP to thank them for using the image, and the sexy back story of the original photo shoot.
That was from Avram Finkelstein's book ("After Silence: A History of AIDS Through Its Images").

With two new ACT UP-themed books coming out, including Ron Goldberg's memoir, "The Boy With the Bullhorn," and K.M. Soehnlein's upcoming novel, "Army of Lovers," there seems to be a resurgence of literature about ACT UP. Peter Staley's memoir "Never Silent: ACT UP and My Life in Activism" was recently released, and last year Sarah Schulman's epic "Let the Record Show: A Political History of ACT UP New York, 1987-1993" was published. Did that have any effect on your work?
We were finalizing my manuscript when Sarah's book came out, but the Oral History Project interviews were hugely foundational for my work. It's hard to disentangle her book from the interviews themselves.

Towards the end of the book, you go into detail about the Ashes actions with how the ashes of the deceased were integral to some of the more somber events, particularly the ashes of David Robinson's partner Warren Krause, and another used Tim Bailey's body in a coffin at a protest in 1993. Did they, as some have claimed, lead to the end of Gran Fury and other prominent actions?
All the fun and joy had been extinguished by that point. Some people consider the political funerals as the dour acts that extinguished the last flame, but I think that's so not true. I think they externalized what had been happening in ACT UP for a long time.

I guess what I'm trying to explain is that it seemed like what with so many people dying, that it was the end of metaphor, the end of cleverness and just literal dead people used as part of a protest.
What the political funerals were saying was, 'This is where we're at now. We no longer have the aptitude to put on a campy Read My Lips-esque demonstration.' 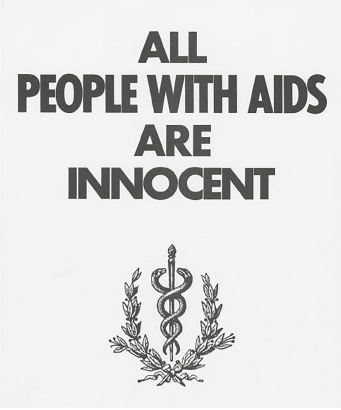 All People with AIDS Are Innocent, Gran Fury, 1988

If you look at the timeline, there is one month where Vito Russo, Ray Navarro, Kevin Smith; about five people died in the span of a week. Every person in the room was good friends with one of those people. I don't think the group found a way to fully process the unending stream of grief.

No, it was rough; lots of memorials.
When you're 28 years old, you don't know how to process the death of your peers. How do you process the fact that your phonebook is full of crossed-out names? Your straight friends just don't understand about going to funerals so often. There's no script for what happens when half of your friends die in 18 months.

One thing you mentioned, that I heard from my interviews, is how they miss it, but they don't. They say, 'If I was in my 20s again, of course I'd jump back in to ACT UP. But they also have a realization that a defining time of their youth was extremely traumatizing. It is a form of PTSD, and I'm not using that euphemistically. They're like war veterans.

It seems difficult to explain to a younger generation how few avenues we had to communicate, and how essential public poster campaigns were when we had mere fax machines and phone trees. Also, I wonder whether current activists have the true collective structure that affinity groups like Gran Fury had.
This was interesting to talk about with members of Gran Fury. There wasn't an effort to say, 'This person made this.' All this stuff was being made on an ad-hoc amorphous basis. It wasn't so clear with a defined mission, but much more messy and spontaneous. I had to find a way to write about the real-time decisions that were made and show the organic growth.

Jack Lowery will read from and discuss 'It Was Vulgar & It Was Beautiful: How AIDS Activists Used Art to Fight a Pandemic' May 12, 7pm at Fabulosa Books, 489 Castro St. www.fabulosabooks.com

Workshop explores lessons from ACT UP