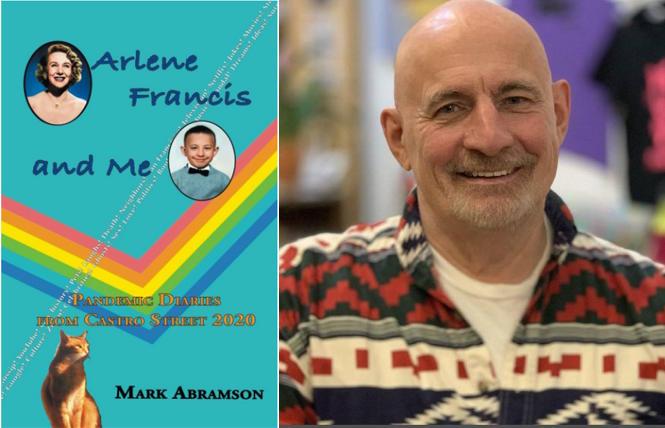 (Editor's note; While we holed up indoors in 2020 ¬—which now seems like much more than two years ago— prolific local gay author Mark Abramson took notes. He shared a few witty diary entries which are included in his latest book. See endnotes for info on his May 15 reading at Fabulosa Bookstore.)

Monday, April 13, 2020
I'm watching Rachel Maddow stoned. I mean me, not her, although she might be stoned too. I just smoked a bowl of primo buds out on the back deck. It's become a nightly ritual after our virtual happy hour. That daily hour-long video connection with friends is a very good thing in my life right now! We share a lot of laughs and some love. I try not to be one of those people who post too often on Facebook, but I love people who make me laugh. Sometimes it feels like the whole world is more connected now than ever, just because all of us have been separated by this killer virus.

Sunday April 26, 2020
I've been laughing about something I saw on Facebook about Betty White staying safe and healthy in her 90s during this pandemic. That got me to start thinking about "life and death" again in a way I hadn't thought about that phrase in a long time, maybe since my friends stopped dying from AIDS every week. I remember a few weeks ago, the first time I checked in at SF General when they asked, "Have you traveled outside of the country lately? Have you been around anyone who has? Any fever lately? Have you had a cough?" We weren't even wearing masks yet, but I soon realized people asked the same questions each time, apologetically, sometimes adding, "We have to ask, you know, because of the new virus." I politely answered, "No, no, no, no." It seemed as silly as checkers at Safeway asking my date of birth every time I bought wine. The other day they asked an old guy ahead of me and he said, "I'm 94 years old." The checker still needed his birth date. I think I would have told the checker, "You do the math!"

Monday, April 27
I just got off the phone with my dear buddy Nile. God, I miss that guy! He said he was nearby this afternoon and wanted to have a visit from the sidewalk, but he got so frustrated shopping at Mollie Stone's on 18th Street, he went straight home afterward. I'm okay, enjoying the back deck. Mayor Breed announced that the shelter-in-place will be extended at least through May. I expected as much. Pride is canceled this year, the 50th anniversary, plus the Folsom Street Fair, Dore Alley Fair, and Burning Man. Joe Mac posted on Facebook today: "I hope they open the bars pretty soon because I need to cut down on my drinking!" I laughed, but my liver hurts.

Monday, May 4, 2020
I think the San Francisco death toll from COVID is still under 30. Marc Heustis has been posting the numbers every day on Facebook. I went to Mollie Stone's Market today. I knew it was noon because the church bells were ringing. There was no line at all. I wasn't inside very long but when I left, at least ten people were waiting to get in, spaced six feet apart. My handsome neighbor Marcus recognized me with a cheery "hi" even with my mask on. He had a small Asian woman (a girlfriend?) on his arm. She was masked but he wasn't. He couldn't have gotten inside without one. I often see Asian people wearing masks in San Francisco, even when it isn't even flu season. They're not stupid. Some people have these new high-tech watches that tell you how far you've walked or how many steps you've taken. 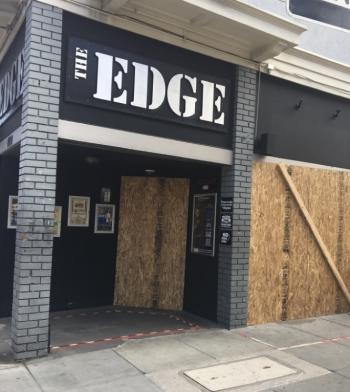 Someone on Facebook today posted: "My Fitbit says I've masturbated nearly 10 miles since this shelter-in-place started!" I saw another episode of "What's My Line?" last night with Jane Fonda, but this time she was on the panel in Arlene Francis's place. The celebrity mystery guest was Lee Remick, who happened to be in New York for the opening of Blake Edward's 1962 film, "Days of Wine and Roses," costarring Jack Lemmon. Jane kind of ruined things by guessing who it was right away, but maybe that was planned in order to give Lee Remick more time to plug the movie.

Thursday, May 7, 2020
Bette Midler tweeted this morning: "I've got to get up and get out of bed before I'm late to the couch again!" You've gotta laugh these days or go crazy — maybe some of both! My big outing today was to Walgreens between the boarded up Badlands and the boarded up "Does Your Mother Know?" next door to the boarded up Edge, one of my favorite gay bars. The neighborhood is eerily quiet!

Castro Street always used to feel like the county fair. When I was done viewing prized tomatoes and had seen which pig won a purple ribbon, it was time for the midway. I could almost hear calliope music, screams, and clanging noises from the rides. Then I'd satisfy my craving for junk food. 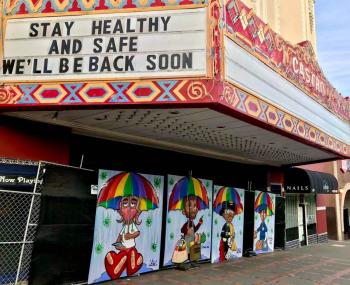 I brought home plenty of junk food from Castro Street too! Some was lacking in any food value, offering nothing of substance but a quick meaty exchange, but what's wrong with a roll in the hay? Nothing!

I heard someone say, "I miss the times before the plague when people weren't so darned nostalgic about everything." I should send that one to Leah Garchik for her Overheards column in the Chronicle.

Friday, May 15, 2020
I saw a meme the other day with a picture of Betty White in a jail cell with another woman, both of them in orange jump suits. The woman asked Betty White, "What are you in for?" She said, "They caught me going the wrong direction down the one-way aisle at the supermarket!"

It's true; they have one-way signs on the floor of the aisles at Safeway, plus reminders everywhere to maintain social distancing, which they consider the space of two shopping carts. As Margaret Hamilton said when she was melting at the end of "The Wizard of Oz," "What a world, what a world!"

Monday, August 31, 2020
The Brian Egg house recently sold for 1.5 million dollars. Most of that side of Clara Street is condos now. Kamala Harris and her husband bought their place in 2018, a couple of doors down from the murder house. The neighbors told the press they always know when she was there because of the secret service out front 24/7. They found Brian Egg's body two years ago this month, but still haven't found his head and hands.

Nile told me some homeless people tried to become squatters while the place was empty. I hope they cleaned the fish tank and got some colorful angel fish, maybe a plastic palm — something to cheer up the place. It's such a weird story that it makes me want to laugh. Sick shit happens. I figure drugs are usually involved — bad drugs!

I don't mean to make light of Brian Egg's decapitation, but about a thousand Americans are dying every day from a disease our president called a "hoax" and promised that it would just "go away." 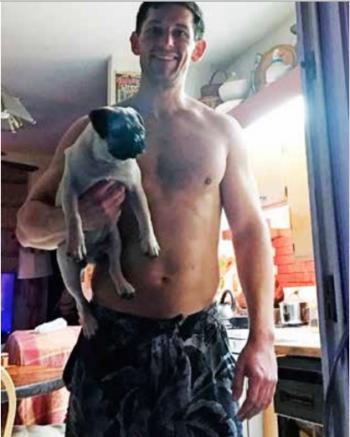 Friday, October 16, 2020
Here's a mystery! Sharon McNight posted on Facebook that she got invited to a concert by the meanest person she's ever met. Speculation was flying in the comments! I asked her, "Is it a virtual concert online? One of those with a fee you have to pay in advance?" She wrote me back, "Yes... and I'm sure you know who it is." But I don't. Someone else commented, without naming names, "Last time we saw her, our seats were terrible! They faced the stage!" That made me laugh out loud.

Tuesday, October 27, 2020
I was spoiled by the sex we had in the '70s and '80s in San Francisco. It was fleeting and fun and filled with fantasy. I could have sex eight days a week and even more nights without even taking my boots off. Home was where we went to clean up afterward and maybe eat and sleep and laugh with our housemates. Sex that came home with us was a much more rare and serious business. I'm full of it, as usual!

I had meaningless sex at home, too. We all brought home dozens of guys. It's just that we had lots more sex outdoors than indoors. I mean sex in the parks or the backrooms of bars or dark alleys outside the bars, in parked cars on Ringold Alley and all around Collingwood Park, in the book stores and afterhours clubs. We probably had sex outside ten times more often than at home, even if we brought a different guy home every night of the week. I miss that aspect of gay life.

Friday, November 27, 2020
Life is good. Well, life is good as long as you're healthy and haven't lost anyone to the coronavirus. They're calling it "Rona," now. Are we infantilizing something earth-shattering to make it less scary? "Rona" is feminine, isn't it? Our culture tries to soften things by making them more feminine, as if women were weaker than men. I don't want to be female, but I'd like to live in a world where women ran things.

I started watching a gay movie on Netflix called "Uncle Frank." It's unbelievable! A woman ordered a martini and the bartender handed her a martini in a chilled glass with an olive on a toothpick, as if it didn't take any time at all to prepare the drink. I had to turn it off. I figured if they were going to be that sloppy with reality, it would only get worse. Hadn't anyone on working on that film every ordered a martini? There's "fake news" everywhere these days! I blame Trump! 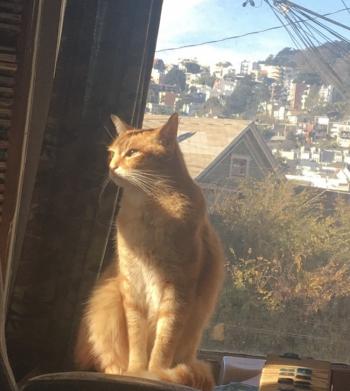 I still can't get over Arlene Francis smoking on the air the other night. Last night I watched an episode from September 15, 1963 when Tony Randall was on the panel, the "celebrity mystery guest" was Allen Funt, host of "Candid Camera" (another childhood favorite TV show) and Arlene
Francis was quite obviously "tipsy," to say the least, but it only made her even more delightful.

Saturday, December 26, 2020
Today was Boxing Day in Canada and England, but it's never really caught on here. I've only known about its origins because I've lived in San Francisco long enough to know gay guys who will celebrate anything!

I remember a bartender at the Pilsner Inn on Church Street back in the '80s. I think his name was Olin, a big bear of a guy who was a bit intimidating until I got to know him. Then he was loveable and very entertaining.

I stopped at the Pilsner one afternoon for a drink with Jim Cvitanich, my partner in 'Men Behind Bars,' who was bartending that day. Jim and I spent hours planning our shows over that bar. I glanced out toward the back patio and there were four big burly men on folding chairs around a card table, playing bridge. Each of them was dressed in something his mother would wear to a bridge game — hats and high heels, bras and brooches and wigs and bracelets! I asked Jim what was going on and he told me it was Olin's club, "ARTPOD."

"What the hell does that mean?"

"Any old Reason To Put On a Dress!"

Harvey Fierstein's 'Better' than ever: theater and film fave's memoir 'I Was Better Last Night'