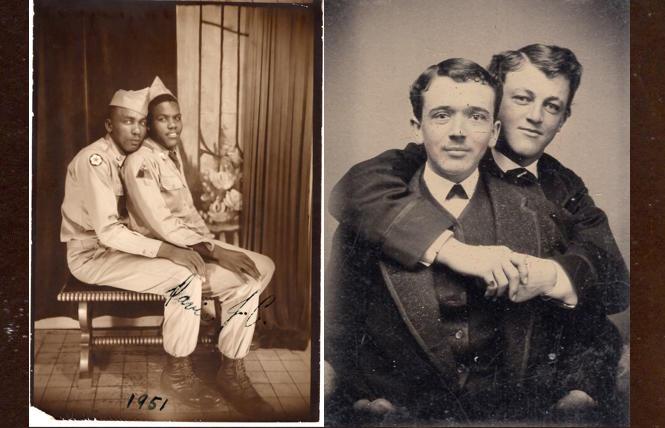 photos from '100 Years of Men in Love: The Accidental Collection'

In his new documentary 100 Years of Men in Love: The Accidental Collection, actor and Emmy-winning filmmaker David Millbern looks back upon gay couples who had the courage to celebrate their love openly, long before gay rights or marriage equality were even a thought. Millbern shows us photos from the 1850s to the 1950s, beautiful images of gay men who were unafraid to show the world who they were and what they meant to each other.

In one particularly lovely shot, two young men, perhaps in their late teens, both well-dressed, stare directly into the camera holding up a sign which reads "not married but willing to be." The photo was taken around 1900 in a world that was very different from the one we now live in. 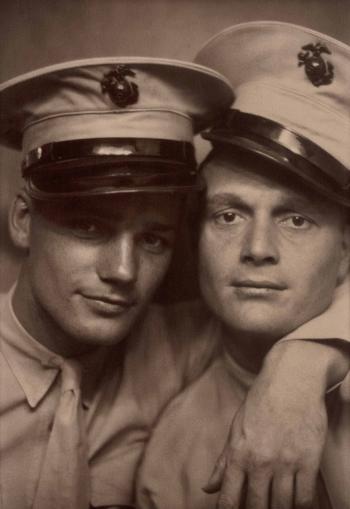 photo from 100 Years of Men in Love: The Accidental Collection

Throughout the film viewers hear commentary from Hugh Nini and Neal Treadwell, a gay couple currently living in New York City. Nini and Treadwell have been collecting the photos for years, scouring flea markets and antique stores for images that would have been lost to history were it not for their efforts.

They are currently holding more than 3000 photos, hundreds of which are shown in the film. Their collection was first seen in a well received-book titled Loving: A Photographic History of Men in Love, 1850s-1950s.

In a phone interview with the Bay Area Reporter, Millbern recalled his youth, when he saw a tintype, an early form of photography which preserves an image onto a thin sheet of metal or iron, of two handsome men sitting very close to each other with their legs, arms, hands and shoulders crossed towards each other.

"When I would ask my parents, my family about it, no one really knew anything about it except that it was my great, great, great uncle," he said.

After his parents passed away, Millbern took possession of a number of items in their house, including the tintype, which he held onto and always wondered about.

"Then I came across Neal and Hugh's collection," Millbern said. "And I started looking at what they were discussing, and the signs, and the implications of what was in the photo, and I thought, bingo, this is what was going on, these are my ancestors, and obviously I wanted to celebrate male partnerships."

He found Treadwell and Nini through their publisher and contacted them, suggesting that their book could make a wonderful documentary. They agreed.

Much of the film is a collage of the many photographs in the collection, with narration taken from words written on the back of some of the photos. Interview footage with Treadwell and Nini was added, and the result is a charming piece that underscores the fact that male love existed long before there were gay bars or gay dating apps where men could find each other.

In some of the photos the men were discreet, smiling into the camera almost like friends, though the look in their eyes reveals that there was more going on than mere friendship. Some of the shots in the film would begin by focusing on a close-up of the men's faces. 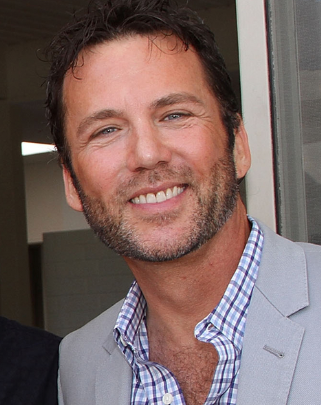 Millbern's camera then moves down to reveal the whole truth. Their fingers might be discreetly touching, or their feet might be intertwined. Some of the photos are more obvious. The men might be embracing, their arms might be around one another. One photo even shows the two men kissing.

"I didn't want this to be just a montage of photos," Millbern said. "I wanted to really linger, and have the audience get the relevance of each shot, get the feel of each shot, fantasize about what it was like for this couple, the risks that were involved, the joy that was expressed. We really stand on the shoulders of these gentlemen that really went out on a limb to document their commitment and their love. They paved the way for us to be free and open, because they weren't allowed to be free and open. They took the risk, they were so joyous that they wanted to memorialize their love in a picture."

The film is subtitled 'The Accidental Collection' because one day Nini and Treadwell found one picture while browsing in an antique store and recognized an image of a loving relationship.

They assumed that it would be the only such photo they would ever find, but then they found another photo, and a third, until they were in possession of 3700 such photos. They were all 'accidental' because they never thought they'd find a second photo after that first one. 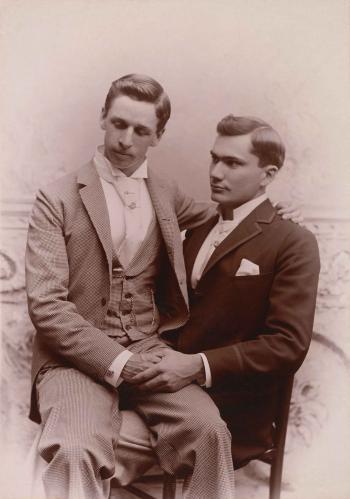 photo from '100 Years of Men in Love: The Accidental Collection'

"To go through their collection and select the ones from the documentary was a monumental task," said Millbern. "I felt such honor as a filmmaker to say that these relationships never saw the light of day in an open, free society, yet the subjects were taking a risk to take that picture. Now, with this film, they get to see the light of day. Now they get to share their love with the world. For me as a filmmaker that was a very responsible job and I took such joy in sharing their joy and I think that comes through in the film."

Millbern hopes that viewers of the film will see that LGBT people have always been around.

"The courage that these folks, these couples had to take a picture when it was not cool to take a picture with your lover," he said. "We celebrate that courage and realize that those pictures were really important then and are even more important now when we face the challenges that LGBTQ people still face in this country. We always say that these people pass the torch. Well, if you pass the torch, you're in the dark. Ignite another torch to say to young people and to our fellow LGBTQ, go out and find love, and commit to love and experience love in this open free society that we have now, these folks didn't have that, yet they did it."

100 Years of Men in Love: The Accidental Collection can now be seen on Here TV. www.here.tv