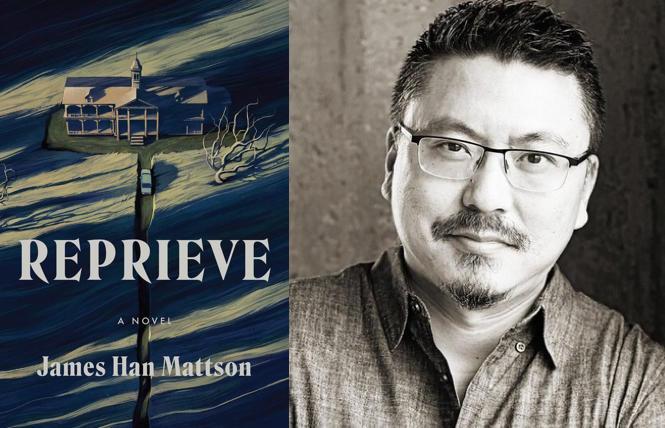 Having recently come down from that Halloween high a lot of folks relish in by decorating their homes with spider webs, witches, bats, and grimacing pumpkins, let there be room for just one more spook courtesy of Korean-born author James Han Mattson. His second novel, Reprieve (William Morrow Books, $27.99), is a thinking person's horror novel and encompasses themes of race, identity, greed, prejudice, and sexuality, all playing out within the dark dingy confines of a Nebraska "full-contact" haunted attraction.

The cast of characters, or "contestants," who participate in the extreme escape room challenges at a local mansion known as the Quigley House, owned by John Forrester, are diverse and addicting to behold.

They consist of Kendra Brown, a nerdy Black teenager who has just lost her father and harbors all kinds of scholarly tenets about why people love to watch others become terrified. Her friend Shawn plays along as well and is also a cerebral horror fan. They are joined by Victor, a banker; his fiancé, Jane, a Thai exchange student named Jaidee; and Leonard Grandton, a business acquaintance of Forrester's.

There's also Bryan, Kendra's cousin and the first victim of the house's rather serious threats which come in the form of lethal weaponry, ghoulish scenery, sinister spooks, and, of course, the aforementioned Leonard, who actually does the stabbing of Bryan and is caught red-handed.

Scattered throughout the core storyline are bits of court testimony and evidence exhibits extracted from crime scenes located deep within the haunt which signals that a serious crime has taken place at Quigley House, one that has taken a life in the most cutthroat way.

Part One provides the set-up necessary to establish characterization, history, and the temperament of everyone involved. In the second section, Mattson ramps up the horror by moving everything inside the bowels of the haunt itself, which consists of a series of "cells" filled with menacing "humanoid" monsters armed with weapons and eager to slice and dice any ill-prepared or timid contestants.

There is a timed task embedded within each room as they progress through cubes adorned with evil, fully armed dolls and demons, rooms drenched in blood, and bodies strung upside down grotesquely swinging from the ceiling.
Just think of a more racially diverse cast of goofballs from Cabin in the Woods trying to battle their way out of the spirit-ridden basement in Thirteen Ghosts, just amped up a few notches on the "bloody confetti" scale.

The events play out much like if you read a spoiler review of a movie but still went to see it even after knowing how it all plays out. Mattson's set pieces are drawn with horrifying precision; the rooms the group must move through are cinematic in detail and deadly serious. There is no opt-out agreement clause or bright red exit signs emblazoning their trail, ever.

The sheer quantity of character backstory has a nagging tendency, however, to stagnate all the creepy momentum the cells and their time-sensitive tasks have heretofore ramped up.

In the end, it's a wild ride and well worth the effort. Though the horrors of Quigley House remain fresh on the minds of readers, there's a more socially relevant undercurrent running just beneath all the dread. The true message here seems to be that the real frights and jump-scares aren't found in Halloween haunts, but in our very own twisted, real-world realities.

ApocaLGBTQ: The Lavender Tube on dystopian dramas and scary spices
Sign up!