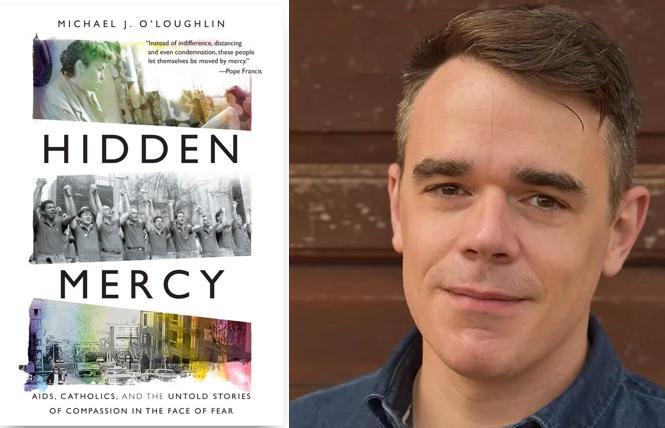 Even before its publication, gay Catholic journalist Michael O'Loughlin's book Hidden Mercy: AIDS, Catholics, and the Untold Stories of Compassion in the Face of Fear, about the ministry of Catholics during the height of the AIDS crisis, has generated publicity. After writing a letter to Pope Francis about the stories of encounters he had heard which transformed his life, in a recent New York Times op-ed article, he announced that he had received the following reply from the Pontiff:

"Thank you for shining a light on the lives and bearing witness to the many priest, religious sisters, and lay people, who opted to accompany, support, and help their brothers and sisters who were sick from HIV and AIDS at great risk to their profession and reputation. Instead of indifference, alienation, and even condemnation, these people let themselves be moved by the mercy of the Father and allowed that to become their own life's work."

This statement was not only a Vatican seal of approval on O'Loughlin's efforts, but "a decades-delayed papal blessing" on AIDS ministers. The Pope's note is also extraordinary because while the book tells the inspirational tales of priests, nuns, and laypeople who ministered to PWAs marginalized by the church, O'Loughlin makes clear that such compassionate care was achieved despite dissent and sometimes obstruction from those in leadership.

O'Loughlin's book has its roots in a nine-episode podcast, he streamed as national correspondent for America magazine, "Plague: Untold Stories of AIDS and the Catholic Church," that was later featured on NPR. O'Loughlin had heard stories about the difficult challenges of being a gay Catholic or working with PWAs during the worst years of the AIDS crisis.

He used newspaper archives to find some answers but decided the best course would be to talk to people about their actual experiences of responding to the pandemic. He was shocked to hear that many of the people he interviewed hadn't been asked about their spiritual work in decades.
O'Loughlin became intent on preserving the witness of older people, for fear their stories might be lost forever since the events they related happened often 30 or more years ago.

McNichols was a Jesuit who early in the AIDS years began celebrating healing masses in Greenwich Village for those with AIDS. From 1983 to 1990 he served as a chaplain with the AIDS hospice team at the Catholic St. Vincent's Hospital in Manhattan, the medical epicenter of the epidemic. He even secured the support of then Cardinal O'Connor.

McNichols had come out as gay in 1983, feeling a need to stand up for both gay priests (who almost never come out publicly) and LGBTQ people. He left the Jesuits in 2002, though he remains active as a priest. While a Jesuit he had started painting icons of PWAs, later expanding his art to encompass both traditional saints and contemporary spiritual personages of diverse faith traditions.

Transformation
Sr. Carol is a Franciscan religious sister from Belleville, Illinois, a rural area. Starting a ministry of homecare nursing she began encountering PWAs who died relatively quickly in those early years. Realizing she knew nothing about the disease, she got permission from her order to fly to New York City to learn about treating PWAs, as well as a crash course in the "gay lifestyle," which made her more fruitful in her work.

Her transformative moment came when, in Hell's Kitchen, she met a young man she recognized from St. Vincent's where she was volunteering, who was very upset because his partner was dying of AIDS. Holding him, her previous uneasy discomfort about romantic love between two men slowly evaporated. Sr. Carol confesses to O'Loughlin that her ministry to PWAs made her a better Christian.

There are numerous compelling accounts reported: Mother Teresa opening an AIDS hospice at St. Veronica's Church in Greenwich Village in 1985; the emergence of St. Vincent's Hospital as a leading AIDS treatment center with a mission for the poor and disenfranchised (it closed in 2010, replaced by luxury condos); David Pais's involvement with the Gay Men's Health Crisis and HIV education, who later with his Dignity chapter (gay Roman Catholics and their allies) organized a silent protest at St. Patrick's Cathedral objecting to Cardinal O'Connor's eviction of Dignity from St. Francis Xavier Church; Ramon Torres, a doctor originally from Puerto Rico who treated PWAs and his struggles with archdiocesan restrictions imposed on him working at St. Vincent's Hospital; and the media coverage of psychiatrist Fr. Michael Peterson, one of the first priests to die of AIDS.

O'Loughlin's book centers mostly on AIDS compassion on the East coast, but he has two first-rate chapters on Bay Area care and advocacy of PWAs. One centers on the work of Michael Harank, a gay nurse and former Catholic Worker member, who convinced the Oakland Diocese to convert a building intended for sick priests into the Worker Bethany House for homeless people with AIDS. This is a particularly amazing achievement because the founder of the Catholic Worker, Dorothy Day, was ambivalent about gay Catholics and maintained strict Catholic teaching on the issue.

Local care
The second chapter explores AIDS ministry at Most Holy Redeemer Church (MHR), in San Francisco's Castro district, through its AIDS support group, organized in 1985 primarily by parishioner Cliff Morrison, a nurse who co-founded Ward 5B at the San Francisco General Hospital. Morrison used a variation of the Shanti AIDS care model of practical and emotional support. While fine, the chapter on AIDS at MHR in Fr. Donal Godfrey's book Gays and Grays has far more depth.

O'Loughlin does highlight the under-reported role of then Archbishop John Quinn, who ahead of Pope John Paul II's 1989 trip to San Francisco, pressed the Vatican on having the Pontiff meet with PWAs while visiting the city. Quinn directed archdiocesan resources to help with AIDS care and he supported gay outreach efforts at MHR.

O'Loughlin recalls meeting Quinn at the Vatican Museum in 2017 and recounting an episode of a mother —after finding out her son had HIV— said to him, "My only mistake was not having an abortion." Quinn was open to meeting with O'Loughlin when he returned to the U.S., but sadly fell ill in Rome and died six months later.

Protests and popes
O'Loughlin provides an informal counter-narrative history of AIDS controversies and how patients were castigated during the 1980s. He briefly sketches the development of ACT UP (which had a healthy number of Catholic members) to advocate for better drugs and treatments for AIDS sufferers.

He also documents the institutional church's homophobia in the form of the infamous 1986 Halloween Letter issued by Cardinal Ratzinger (later Pope Benedict XVI) which termed "homosexuality an objective disorder... an intrinsic moral evil" and Cardinal O'Connor's refusal to sanction the use of condoms to prevent the spread of HIV. This stance led to the infamous ACT UP 1989 protest at St. Patrick's Cathedral, relayed here through the lens of former Catholic organizer Sean Strub.

O'Loughlin is very effective in reporting the tensions between an institution often perceived as homophobic yet also its concern for marginalized people. O'Loughlin interweaves throughout the book his personal attempts "to reconcile these two parts of my identity (gay and Catholic)," complicated by the Vatican's ban on gay seminarians and refusal to bless same-sex relationships.

He ultimately opts to remain in the church because the love exhibited by AIDS ministries bolstered his own faith. While his own struggles are relevant, it might have been more constructive to have covered them in one chapter rather than sprinkling them throughout his narrative. His own reflections unwittingly dilute slightly the emotional power of the other stories he's telling.

Hidden Mercy reads like a journalistic account, a first draft of a history that deserves more fuller documentation. The book might have benefitted with a few more stories about PWAs themselves, since it was their maltreatment, stigmatization, and exclusion that ultimately compelled many of the people O'Loughlin describes to act and provide necessary services to them. But these are minor nitpicks of an otherwise captivating book.

O'Loughlin's project is reminiscent of film director Steven Spielberg's USC Shoah Foundation which he founded in 1994 to videotape and preserve interviews with survivors and witnesses of the Holocaust before they died. O'Loughlin has similarly preserved testimonies of people who provided healing, compassion, and hope during a gay holocaust.

Readers can be grateful to O'Loughlin for profiles of these saints who shouldn't be forgotten on this fortieth anniversary of the onset of AIDS, but also for providing queer Catholics a valuable history and template in their attempts to come to terms with their sexuality and their spirituality.

O'Loughlin comments in his acknowledgments that "his goal in writing this book was to do justice to stories of heroism that have not been told." Mission well accomplished.

Hidden Mercy: AIDS, Catholics, and the Untold Stories of Compassion in the Face of Fear by Michael J. O'Loughlin. Broadleaf Books, $28.99
www.broadleafbooks.com
www.mikeoloughlin.com

Paying tribute to those lost to AIDS