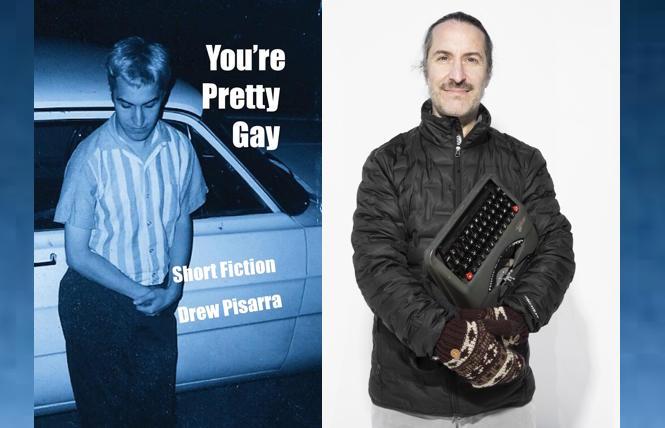 In queer author and poet Drew Pisarra's second collection of short stories (after the impressive debut, Publick Spanking), he really wants you to know all about his feelings, his life, his history, and every nuance in between.

Presented through mostly freeform narration, some stories, like the opener, "Fickle," is directed right at the reader, and delivered devoid of dialogue or long conversational sequences. Pisarra gets his messages across through an artistic, unorthodox manner of prose. It's the kind of writing that's wonderfully akin to a well-prepared stand-up comic act or spoken-word poetry belted out across a dimly lit café filled with artistic queers eager to behold the next unexpected wellspring of inspirational wonder from within their community.

In "Arctic Chill," a kind of autobiographical coming-of-age diatribe unraveling in a most unrestrained fashion, Pisarra describes his gay boyhood initially as a fourth-grade student, then to college in New Orleans where he first experienced the joys of same-sex coupling after coming out to his stepfather. The story then takes a bizarre hard left in the form of a trip to the North Pole to visit Mrs. Claus where he becomes acquainted with the First Lady of Christmas as they "ate our cookies and drank our cocoa to the sound of Santa I suppose snoring in the room next door."

Whether it be a cap in the closet in "The Hat From Hell," the caterpillar in "What Bugs Me," or a magical "last adolescent vacation" to New Orleans after his senior year in high school in "Flashes of the Future," many stories expertly and creatively condense Pisarra's awkward childhood into a series of emotions or a capstone event that is as uncomfortable as it was unforgettable for the author.

The trials of his early adventures in dating come along fast and furious toward the conclusion of the collection and form some of the funniest and most entertaining parts of the book.

Behold the author's experiences with the worst kisser he'd ever locked lips with ("he's pushing against my mouth as if it were playdough while simultaneously licking every surface of my teeth, my gums, my tongue."), a former dancer whose pics were much younger versions of his real-life looks, and a one-night trick in an apartment building with a shared bathroom on each floor where things get messy when the author couldn't remember which apartment door his sex date lived in.

Each of the fifteen entries will evoke a variety of emotions from laughter to shock, nostalgic sadness to sexual bliss, and that's quite a feat. Pisarra is better known for his works of poetry, so the prose here is unique, alternative, and impulsively inspired, making great creative use of language and how playful and moldable it can become in the hands of a writer who doesn't limit himself to conventionally -boxed formats.

At just 85 pages, no word or phrase here is squandered or wasted. Pisarra's world is just pure fun and amounts to pages of queer creative writing and storytelling at its finest.