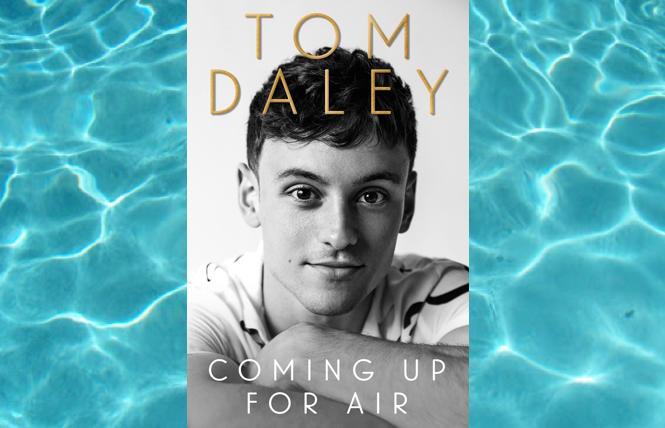 What you won't read in Tom Daley's new memoir, Coming Up for Air (HarperCollins), is that barely had he dried off from achieving a life goal of becoming an Olympic champion at last summer's much-delayed 2020 Tokyo games than he gave a press conference so heartfelt, so unexpected, so bold and disarmingly direct that it has attained 'greatest hits' status.

The British diver —who may not be known in only that way for much longer, such a runaway train is his bright, rapidly unfolding future— spoke of the honor of being not just an Olympic multi-medalist but also by doing so as an out, understandably proud gay man. He made this statement while acutely aware that too many of his counterparts were doing so as citizens of countries in which being out and gay carried at least the potential of a death sentence.

Daley's message to LGBTQ people everywhere was not just that their wildest dreams could be achieved but that there was a whole family they likely knew nothing about that was there to support them in their struggles.

Daley could have included that immediately viral press conference in Coming Up for Air. The mesmerizing story he tells there includes his medal wins in Tokyo, at the age of 26 his fourth Olympics. But for all the candor in his story, there's little room for self-congratulation and none for self-proclaimed heroism.

He begins his non-linear tale with a harrowing account of one of the signal traumas of his diving career. At the 2012 Olympics in Rio, he won a bronze medal only after requesting and being granted a "re-dive," to compensate for a bungled attempt at his maximum-difficulty, signature dive, which he named the Twister. Flash photography was officially forbidden, but when Daley leapt from the ten-meter platform, a blinding burst of flash bulbs distracted him from the rigors and terrors of the dive.

No athlete wants a do-over, say nothing of one at such a high-exposure event, but Daley had just enough self-esteem to ask for the chance to do what he knew he could, and had trained years for. But the medal he won hung heavy on him and, "the lowest of lows," the experience dogged him for years. "It was like I was having a mid-life crisis at the age of 18." 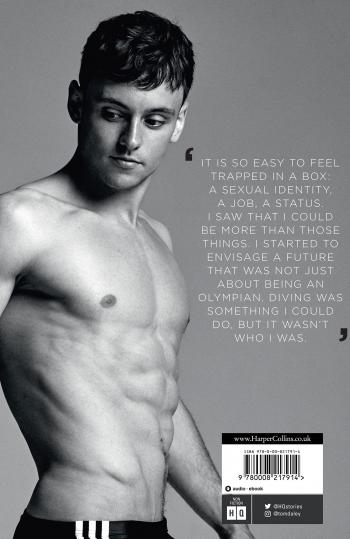 the back cover of Tom Daley's book

The Chinese divers who have become his fiercest competitors internationally make what they do look as difficult as it is. Daley is that other kind of star athlete; he makes it look easy.

His talent, and the fruit of his heavily disciplined training, are all but eclipsed by the Bambi eyes, killer smile, camera-licking looks, seemingly tireless sense of humor borne on a positively musical verbal delivery, unerring sense of the line between flirting and tease and an almost Oscar Wildean knack for gilding every performance with a sense of fun, likely naughty. He draws from a seemingly fathomless fund of charm that can make Price Harry come off like Ebenezer Scrooge by comparison.

Tellingly, if immodesty is all but absent in Coming Up for Air, so, too, is self-pity. In addition to the inescapable hazards of diving from any height —concussions by hitting the water incorrectly, say nothing of the diving board, broken bones, near-constant pain from training— Daley can report that, prior to the agonizingly on-again, off-again "2020" Olympics, he was hospitalized for COVID-19 and, at the last possible moment, underwent keyhole surgery on a torn meniscus.

What balances it all —shoring it up this side of terminal drama-queenism— is his capacity not just to stick to the facts but to illuminate them for lay sports fans.

"Diving is considered a collision sport," he writes matter-of-factly. Somehow his pointing out that years of grueling training are tested in dives that average 1.6 seconds also puts things in perspective.

If Coming Up for Air has a motto, it is this:
"Many athletes will tell you that we spend hours and hours training our bodies and muscle memory, and fuelling ourselves with the right food, but if you can't train your mind and the way you think, then you can never be your best."

Having become an Olympic knitter as a way to keep focus out of the pool has made him a meme, but it's his gradual but steady investigation of mindfulness that has been his salvation.

The book's roughest chapter in every respect, including as a piece of writing, is his account of the death of his devoted father, at 40, of a "grapefruit-sized" brain tumor. Steering clear of excuse-making and evasive pathologizing, he charts his reluctant realization that PTSD is as much a regular companion as is his phenomenal support network.

Two matters that stand out —because they're both unexpected and then explored at depth— are an eating disorder he has wrestled down but knows will be with him always, and a never-ending struggle with a fickle body image. Literally millions of his followers on social media count as his "close observers," and he cites the challenges of a living in a body seldom covered by more fabric than can be held in the palm of a hand — and the almost routine sexualization of it that results.

"As my profile became bigger," he writes, "it was like I was public property and everyone needed to know everything about my private life, where nothing was off limits."

It's a challenge that will only become greater no matter how smart the wardrobe the media-savvy gay husband and father adds to his Speedos. He's done us all as well as himself a favor by, between dives, coming up for air.